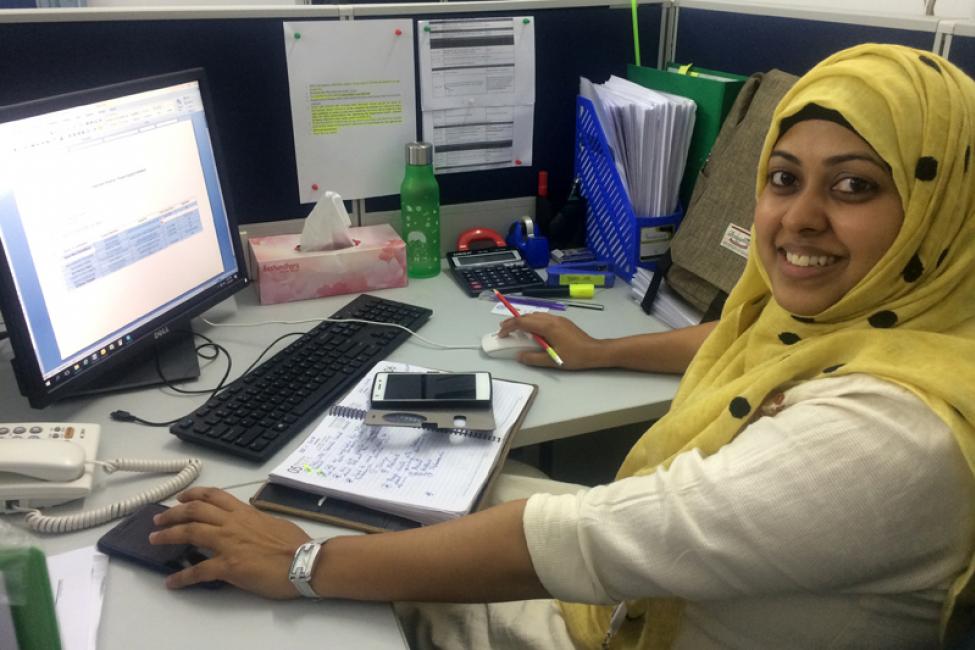 The influx of Rohingya refugees, which began in late August last year, has expanded job opportunities across a wide range of aid jobs in Cox’s Bazar, where the IOM, the UN Migration Agency, has hired about 500 Bangladeshis in the past five months. Hundreds of others have found new jobs with other international and national aid agencies.

Over 688,000 new Rohingya refugees have fled Myanmar into Bangladesh over the past five months, bringing the total number of Rohingyas in Cox’s Bazar to around 900,000. More continue to arrive every week.

The new staff recruited by IOM to cope with the emergency in Cox’s Bazar since August 2017 join over 250 local national staff who were already working for the UN Migration Agency in Bangladesh on a variety of migration-related projects.

The majority are working on the frontline of the refugee crisis in Cox’s Bazar, playing important roles in supporting both the refugee and host communities, while learning a broad range of new skills.

Enamul Hoque, 29, joined IOM in December 2017 as one of three frontline staff team leaders assessing needs and delivering essential services to refugees and local people in the Shamlapur area of Cox’s Bazar.

A graduate in anthropology, with a particular interest in grass roots interventions, he had been aware of the Rohingya refugees since he was a child. “I’m enjoying the monitoring and service provision programming skills I’m acquiring in this job and am looking forward to developing my career in the humanitarian sector,” he said.

While IOM staff such as Enamul are new to humanitarian work, many specialized professionals have also found work with IOM. Among the newly recruited personnel, IOM has employed almost 200 medical professionals, including doctors, paramedics, nurses, midwives, counselors, technologists, radiographers, pharmacists and vaccination staff.

Dr. Romana Islam has been working with IOM in Cox’s Bazar for three years. “I’d always worked on general obstetric issues and never really thought about gaining other skills and experience. But following the refugee influx, I’ve dealt with a significant number of sexual violence cases and people in need of mental health support. Working on these issues has really enhanced my experience in different fields and encouraged me to broaden my studies,” she said.

“This opportunity improved my skill set in many ways. I’ve learned to apply modern international standards to the recruitment process, where previously I had worked in a very traditional way. I’ve also benefited from working in a large organization with people from a diverse range of nations and backgrounds,” she said.

For some workers, the changes brought to their role by the influx have been less dramatic, but still brought significant benefits. Mobarak Ali, 25, an IOM maintenance worker from Cox’s Bazar was working on a casual basis for over three years. After the influx, he was offered a full-time position. “I’ve been working for IOM as a full-timer for three months now. It’s a secure job and the regular income suits me much better,” he said.

Besides the newly recruited national and local staff, IOM has also worked with its local partners NGOs Mukti and Bangla-German Shampreeti to recruit over 250 health promoters to work in the refugee camps. They are trained before providing primary healthcare, psychosocial counselling, and maternity care to people in both the refugee settlements and host communities.

Milki Barua, 26, lives in Ukhiya district and recently joined Mukti as a health promoter in the vast Kutupalong extended makeshift settlement. She had never had a formal job before November last year, but was desperately seeking work to support her two young children after her husband lost his job. “This job was a great opportunity in terms of my financial security and to develop my professional skills,” she said.

“Most of the health promoters are new to this  sector. They had little or no experience in outreach work related to health issues. The trainings we’ve provided and the work they’re doing in the field has helped them becoming a workforce with a very specific skillset that is very much in demand in Bangladesh’s current job market,” said Mukti project coordinator Jebor Mulluk.

IOM managers leading the response on the ground say that the opportunity to bring on board a mixture of skilled national and local professionals and others seeking to develop new skills has played an invaluable part in the emergency response, while also supporting wider workforce development.

“Bangladesh’s welcome to and support for so many refugees has naturally created a lot of challenges. But it has also brought some benefits to the local employment sector,” said Raid Ramahi, IOM Bangladesh’s Resource Management Officer. “It has actually created opportunities for skills and capacity development for a young and aspiring workforce, which will be of value to the whole country.”