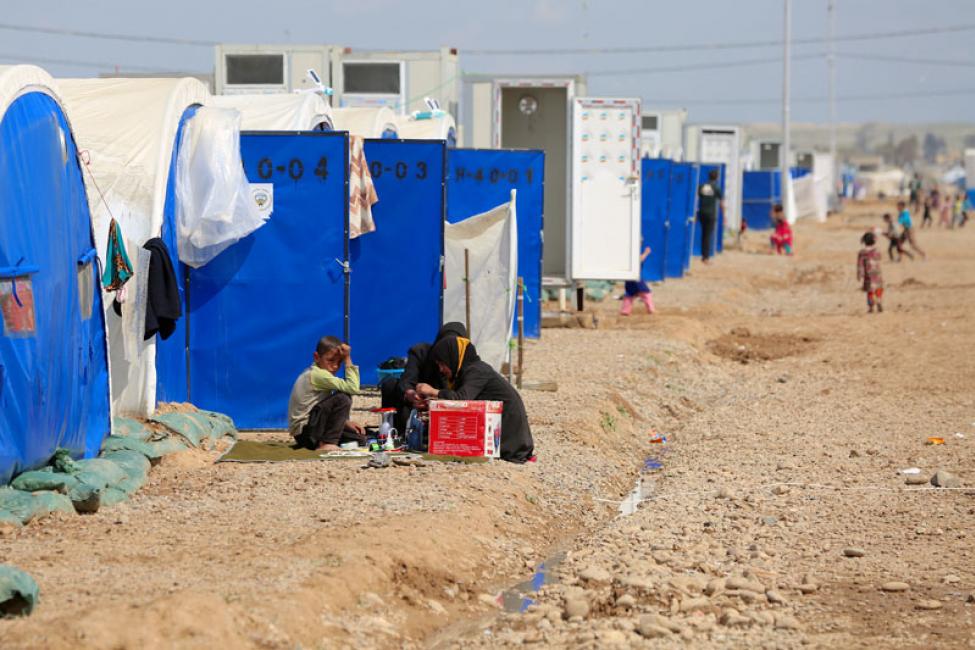 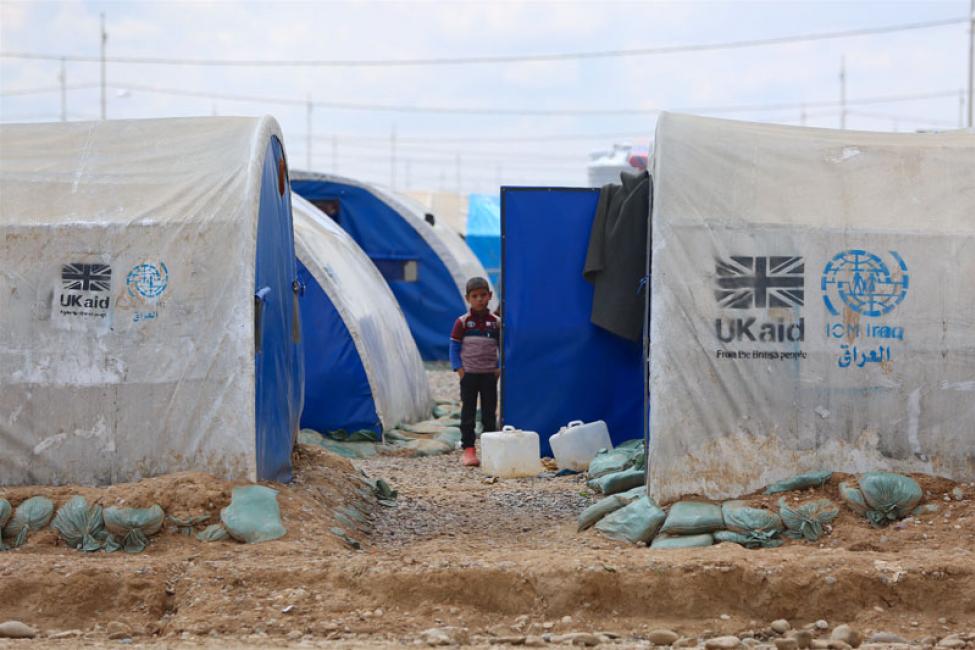 Yesterday’s (06/07) decision to halt certain activities and distributions in the sites, situated outside Mosul, comes following a temporary decline in the security environment in Qayara District, due to sporadic violence, including exchanges of gunfire. “The situation in Qayara is not currently conducive to humanitarian operations,” said Vincent Houver, Deputy Director of IOM’s Operations and Emergencies.

Both emergency sites, hosting over 79,000 displaced Iraqis, were constructed by IOM in cooperation with Iraq’s Ministry of Displacement and Migration (MoMD).

IOM’s decision to temporarily suspend its emergency activities and to relocate all non-local emergency response staff to Erbil was made together with partners on the ground. The situation will be reviewed on Sunday (09/07). IOM and partners have kept a skeletal presence in the camp. Other organizations working in the camps and surrounding areas have taken similar action.

Only eight out of IOM’s 18 Camp Coordination and Camp Management (CCCM) staff currently remain in Haj Ali camp, but all those whose work entails travelling from Qayara to Erbil, have been instructed to leave the camp early to avoid delays at checkpoints and in order to respect a curfew imposed in Qayara as a result of the security situation. Qayara city itself is reportedly under curfew and the local population has been told to stay in their homes until security improves. IOM’s Qayara mobile team working in informal settlements has also temporarily suspended operations as the curfew has been put into effect in the area.

Although the suspension and relocation are temporary and a necessary disruption, they will have an impact on service delivery to displaced people living in the camps and those continuing to flee Mosul. The camps have also been closed by security to minimize the risks with no movement currently allowed in and out of the sites. This is a concern in Haj Ali, where 13 buses of newly displaced people were expected to arrive.

Due to the situation, six MoMD water trucks, which provide water to the camp, did not clear the checkpoints yesterday (06/07). That means less water availability for the residents of the sites. Temperatures in Iraq have been in the high 40s and low 50s (degrees Celsius) these past few days.

Currently, only camp-based staff are operating in the camps. IOM’s health team is continuing to operate at both sites. IOM’s psychosocial services report no imminent emergencies or events within the camps themselves; however, the camps are reportedly inaccessible for staff living outside, as security forces have stopped significant civilian movement in the area. IOM staff remaining in the Qayara emergency site have also reported increased stress among the displaced population. IOM is continuing to provide as much support as possible, under the current limitations.

Iraqi government forces, backed by a US-led coalition, launched a military offensive to retake Mosul on 17 October 2016. The eastern side of Mosul was recaptured in January after just three months of battles.

The second phase of the offensive to retake the western sector, including Mosul’s old city itself, was launched in February 2017. Last week, Iraqi troops took over the Old City’s Nuri al-Kabir Mosque, where ISIL first declared its de-facto state  “caliphate” in Iraq and Syria in 2014. The military had been predicting final victory within days after a grinding eight-month assault to oust ISIL from the once two-million-strong city. Iraqi forces are now fighting ISIL for control of the last 250 square meters, a senior official in the international coalition supporting Iraqi forces told Reuters.

IOM Displacement Tracking Matrix (DTM) Emergency Tracking has been monitoring displacement movements from Mosul district since the beginning of the military operations to retake Mosul started in October last year. Some 821,838 individuals (136,973 families) are currently displaced.

Military operations in west Mosul led to the displacement of thousands of individuals to camps and out-of-camp locations, the Displacement Tracking Matrix (DTM) is now weekly releasing the figures of IDPs who transit through Hammam al-Aliel screening site – from the beginning of west Mosul operations. The cumulative figure from West Mosul, who transited in Hammam  al-Aleel, stands at 695,677 individuals.

All DTM products and information about the DTM methodology can be found on the DTM portal: iraqdtm.iom.int