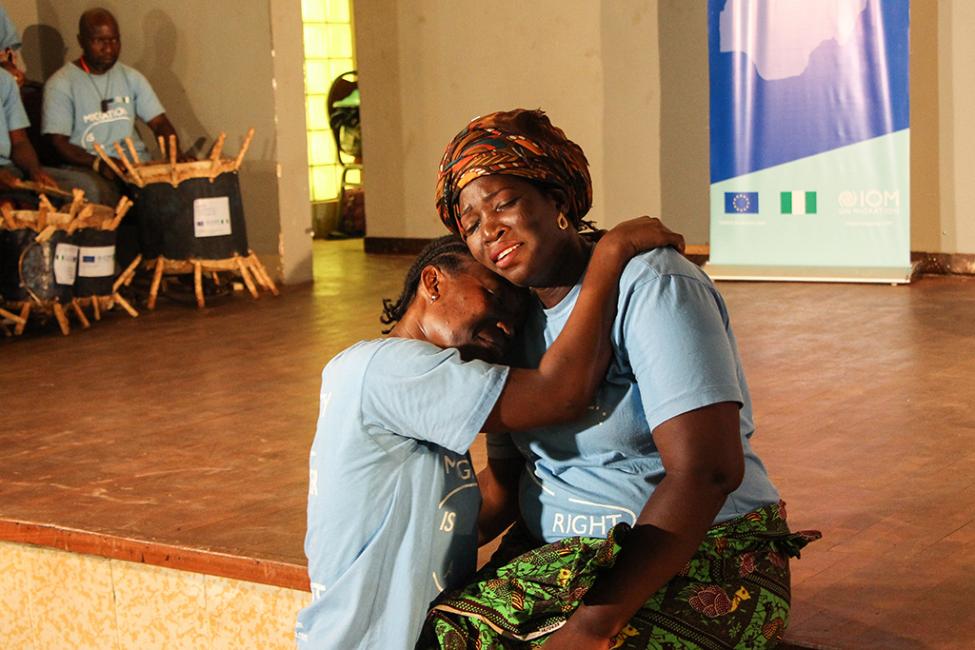 Benin City – The city of Benin in southern Nigeria was once the capital of the former Edo Kingdom of Benin, one of the oldest states in West Africa. It dates back to the 11th century.

Little remains of that kingdom. The once-mighty city is now the main “sender” place of origin of Nigerians migrating irregularly towards Libya in search of greener pastures in Europe.

To inform local youth about trafficking in persons and other risks of irregular migration, the International Organization for Migration (IOM) organized on 18 October three theatre performances in the Edo state capital. The performances marked the completion of an eight-month training in 17 communities in Edo and Delta states, two key migration-prone areas in Africa’s most populous country.

The open-air event brought together close to 100 individuals, who gathered to raise awareness about the plight of thousands of people who have suffered deception, abuse and exploitation along their migration journeys. Since early 2017, IOM has assisted some 15,171 men and women to voluntarily return to Nigeria. Most returned from Libya, Niger and Mali under the EU-IOM Joint Initiative for Migrant Protection and Reintegration.

Of those, 42 per cent came from Edo. The theatre project grouped 44 men and 33 women into five troupes performing 47 shows in 115 communities in Edo and Delta. From July through September this summer, those performances reached 8,403 individuals.

“Most of the actors are seeing theatre for the first time, so the training wasn’t easy. But I’m elated with the outcome,” said Lancelot Imasuen, a renown Nollywood filmmaker who led the project. “A lot of these people have the talent to pursue acting; some of them are even performing at the national arts and culture festival taking place this week in Benin City.”

Together with Imasuen, IOM helped audition the actors and performers and equipped them with materials, musical instruments and props. Imasuen, who directed the three plays titled Empty Waka, Dance of the Migrants and Trafficked, trained the participants on directing, script development, stage management, set and costume design, and make-up.

“We selected returnees, students, potential migrants, and their families to promote social cohesion as we have witnessed that many returnees face stigmatization upon return to their communities,” explained Cyprine Cheptepkeny, IOM Nigeria Awareness Raising Officer. “We chose theatre as an awareness raising tool to pass on the message in an entertaining way, going beyond the traditional information channels,” she added.

Those watching the plays in markets and other public spaces say they have been impacted by the stories. At one performance, a woman among the audience shared the story of her daughter. Based on that testimony, IOM was able to identify the daughter as a victim of trafficking. Following further investigation, IOM staff referred the case to the National Agency for the Prohibition of Trafficking in Persons (NAPTIP).

“In ancient Greece, theatre was seen as an instrument for social development and a means to express belief, approval or disapproval, pain and suffering,” said Eleni Zerzelidou, EU Project Officer, Migration and Drugs. “Community theatre nowadays goes beyond that. It comes from the community and it can help the community develop capacities for critical thinking on human trafficking and other issues affecting them.”

This project is part of IOM’s wider efforts to promote safe migration channels in Nigeria. At the end of October, IOM will organize the ‘Music for Safe Migration’ concert in Benin City, among other sensitization activities. The event was funded by the European Union through the EU Emergency Trust Fund for Africa (EUTF).