Ukraine: A Child’s First Year of School, During a Sixth Year of Conflict 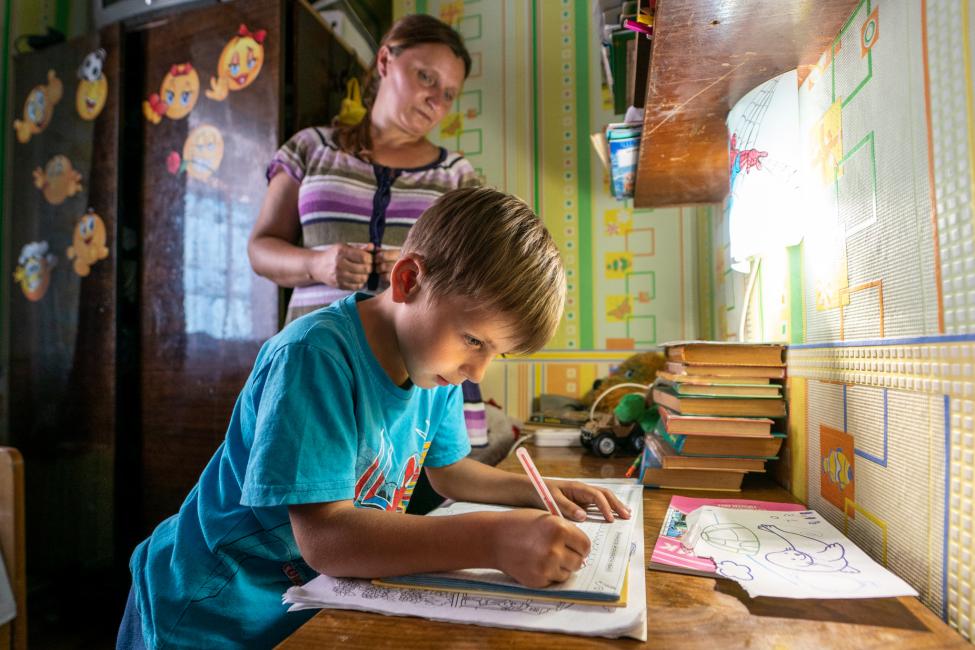 Popasna – Across much of the world this week, families are preparing for an annual event: the early September journey back to school. They’re asking themselves: Have we bought all the textbooks, notebooks and school uniforms? Got the lesson schedules? Is everybody ready?

That’s the case, too, in the town of Popasna, where preparations are well underway despite its population’s proximity to the contact line in conflict-affected eastern Ukraine.

As well as the challenges all parents face – new clothes, books, maybe a few tears – families in this part of the world also must prepare for other, more lethal, concerns: avoiding land mines on their children’s paths to school; being wary of artillery shelling during their class time.

The conflict here is in its sixth year.

Since the beginning of the conflict in 2014, over 750 education facilities have been damaged and many more experienced disruptions to education. The Ukraine Education Cluster estimates that over 700,000 children and teachers in more than 3,500 education facilities in eastern Ukraine are affected by the hostilities and in need of humanitarian assistance.

More than 400,000 children experience the direct impact of the conflict as they live, play and go to school within the 20-km on both sides of the ‘contact line’, where shelling and extreme levels of mine contamination threaten their lives and well-being.

Since the start of 2019, the United Nations Ukraine Education Cluster has received reports regarding 23 conflict-related incidents resulting in physical damages to school infrastructure, including at two education facilities that had to be temporarily closed. An additional five reports were received of military presence in close vicinity to an education facility and at least nine incidents resulting in threat of death or injuries to students, teachers and parents.

The month of July 2019 saw the highest number of education related incidents since May of 2018, when six education facilities were damaged during a single month during an increase of hostilities.

Nevertheless, it’s an exciting, special time for little Dima. He graduated from kindergarten and is going to start big school. His dad has repurposed an old table into a homework desk, and now it fits the boy’s size. Every day Dima practices with his handwriting manual and reads books at his new desk.

A new backpack was bought in advance, last winter. Dima often gets it out of the closet and walks around the house like the real schoolboy he will be in a few days.

His mother Yana has just received a cash transfer from IOM, part of a programme funded by the US Department of State Bureau of Population, Refugees, and Migration. She immediately went shopping to buy a tracksuit, T-shirts, jeans and a shirt for Dima.

There are three children in the family: Dima and two older sisters. “Kids’ stuff is so expensive now,” says Yana. “Jeans cost 200 hryvnias (USD 7.50). Maybe the clothes for adults are even more expensive, I have already forgotten.”

On the other hand, the family is nearly finished with the refurbishment of their house, which was damaged by shelling. Yana points proudly to new wallpaper in her daughter’s room. “Just a few holes after the shelling left in the living room,” she notes confidently. “We will plaster them and try to forget about this horror.”

Yana lost her job a year ago. When she’s not out job-hunting, or looking after the family, she’s in her garden. Neighbours who have left Popasna allowed her to cultivate their plots, and now the family is literally living off the land.

Yana’s husband goes to work every day, but his factory has been idle for several months (the conflict caused the breakdown of many enterprises in eastern Ukraine), so he must earn cash however he can.

Cobbling together their previous savings and cash assistance received from IOM, the family bought farm machinery with the hope of making money by ploughing people’s plots in the coming autumn. That way they may earn enough money to get them through the harsh winter.

Within its humanitarian programmes, IOM has assisted over 100,000 conflict-affected and displaced children since the outbreak of the conflict in Ukraine in 2014.

People living within five kilometres of the contact line are frequently the most in need of humanitarian assistance. According to UN OCHA, shelling and landmines have isolated about 70,000 people who live in some 60 communities in areas close to the contact line in government-controlled areas. Almost half of them are elderly, and some 35 per cent are people with disabilities and chronic diseases. Residents face challenges accessing social services, markets and health care. Many of these communities have been cut off from their typical service providers, while the presence of local authorities and humanitarian actors is compromised by insecurity.

Overall 2,158 households and 3,687 vulnerable individuals residing in the government-controlled areas close to the contact line in Donetsk and Luhansk regions benefitted from the PRM-funded programme. The multipurpose cash assistance was delivered in three rounds during July 2018 – September 2019 with the total of USD 976.621 paid to beneficiaries.

For the period of three months, each beneficiary was supported with UAH 2,580 (in average about USD 100, the rate fluctuated).

This unconditional assistance allowed vulnerable individuals – elderly people, people with disabilities, single parents or parents with three and more children – to choose which goods or services they would like to purchase based on their own time-specific needs and household priorities.

As reported by the beneficiaries during the post-distribution monitoring, the provided cash assistance was used mainly to address needs in health care (60%), food (56%), cover the cost of  winterization needs (32%), as well as to pay for rent and utilities (32%). Also, many beneficiaries decided to save a part of the money for winter needs, especially to buy coal or wood for heating fuel as well as any medical treatment.