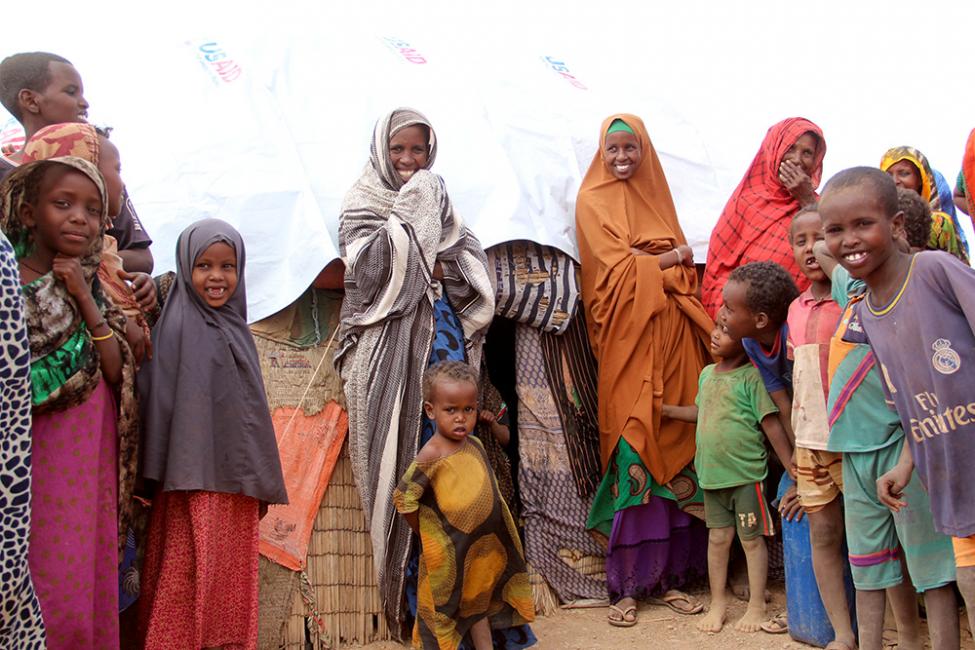 A displaced family stand in front of their shelter at Adadle Woreda Somali Region of Ethiopia. Photo: A.Seifeselassie / IOM

Addis Ababa - While the rainy season is a welcome promise of good crop yield for farmers, for many internally displaced persons in Ethiopia it presents a myriad of challenges.  And for that reason, the African proverb “It rained on the mountain top, but it was the valley below that got flooded” could not be truer for the many displaced.

Some 806,913 people are currently displaced in Somali Regional State owing to drought and conflict. A young widow, who was living in Libahle Town, explains how she was forced to relocate with her son, sister and 19 other family members when their 150 cattle and goats died. The family was left with only two animals.

Twenty-seven-year old Gini Mehmed narrated their ordeal: “The cold and the wind create such harsh conditions to live under a shed without a roof.” Gini explained how she has managed to cope with the adverse effects of the rains: “We value the plastic sheeting that was provided to us by the IOM to roof the shed.” She is one of the beneficiaries of a recent IOM Non-Food Item (NFI) distribution in Adadle Town, Ethiopian Somali Regional State.

IOM, the UN Migration Agency has continued its support for internally displaced persons in the region, including support to the Government of Ethiopia to coordinate the Emergency Shelter (ES)/NFI Cluster; over 2,071 transitional shelters were constructed for refugees and nearly 21,535 households provided with NFI kits and cash in 2017 alone.

Gini’s family is among the 21,535 beneficiaries which IOM, under the leadership of the National Disaster Risk Management Commission (NDRMC), the United Nations Resident Coordinator/Humanitarian Coordinator and the Office for the Coordination of Humanitarian Affairs (OCHA), was able to support through a wide spectrum of interventions, from prevention and preparedness, through response and mitigation to recovery.

As IOM has shifted gear in accordance with the new way of working in response to emergencies such as drought, it has joined the Ethiopian Somali Regional Disaster Prevention and Preparedness Bureau (DPPB) and the Durable Solutions Working Group, to endorse the Durable Solutions Strategy for the Somali Region as of the end of 2017. This first of its kind strategy in Ethiopia provides a framework that seeks to solve the widespread displacement of hundreds of thousands of people in Ethiopia’s Somali Region. The organization has also continued its effort to respond to urgent needs of the displaced community.