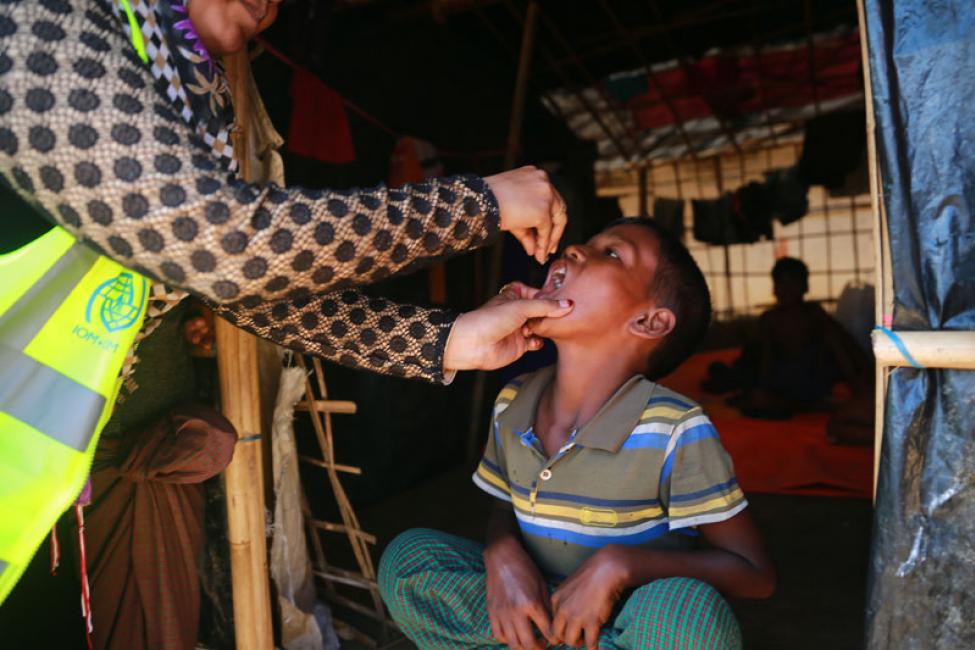 Cox's Bazar  –  In a race to prevent an outbreak of cholera among over half a million Rohingya refugees who have arrived in the past six weeks, health teams in Cox’s Bazaar, Bangladesh today launched a mass immunization operation to dispense oral cholera vaccine (OCV).

The campaign follows a joint international effort to mobilize 900,000 doses of the vaccine from global emergency stockpiles, and detailed planning led by Bangladesh’s Ministry of Health and Welfare and international agencies, including the World Health Organization, IOM, UNICEF and MSF.

The first round of the campaign, carried out at upazila or sub-district level, will immunize 650,000 Rohingya men, women and children, aged one year and above, over the next seven days.

The Ministry of Health and Family Welfare requested the vaccine from the International Coordinating Group on Vaccine Provision (ICG) on 27 September. The ICG is a coordinating mechanism that brings together WHO, UNICEF, MSF, and the International Federation of the Red Cross.

GAVI, the vaccine alliance, is providing financial support and multiple national and international agencies, including IOM, the UN Migration Agency, are implementing the campaign.

More than 200 mobile vaccination teams, each with five members, have been mobilized and dispersed across 12 Rohingya camps and makeshift settlements to roll out the campaign.

It will target new settlements in Ukhiya and Teknaf sub-districts of Cox’s Bazar, and Naikkhongchorri sub-district of Bandarban, as well as surrounding host communities.

IOM, which has mobilized 200 volunteers to conduct the campaign, today began work in Jamtoli makeshift settlement.

IOM volunteers will go house to house, together with community focal points members, to ensure all the refugees receive the vaccine to protect them against cholera.

In the second round of the campaign, 250,000 children between the ages of 1 to 5 will be given a booster dose between 14 days and 3 months after they received the previous dosage.

Since August 25, an estimated 519,000 Rohingya refugees have arrived in Bangladesh having fled violence in Myanmar in the largest and speediest movement of a civilian population in Asia since the 1970s.

Cholera is an acute diarrheal disease which can kill people very fast if untreated. In severe cases, it can lead to extreme dehydration, shock and death within a few hours. The symptoms of cholera can include watery diarrhea and vomiting, muscle cramps and weakness.  It is contracted mainly by eating or drinking something that has been contaminated by faeces or vomit infected with cholera germs.

It can easily spread in densely populated communities where access to safe water and sanitation are poor. Poor hygiene behavior, limited volumes of containers, soap distribution and water treatment as well as high population density are all attributors. Living in overcrowded crammed and squalid settings with little or no sanitary facilities are the perfect conditions for an outbreak.

Over 4,500 Rohingya have already been treated for diarrhea and many others for dehydration, and over 14,000 children under the age of 5 have severe acute malnutrition, according to the Inter Sector Coordination Group in Cox’s Bazar. Malnourished children are at least six times more prone to die from a diarrheal disease like cholera.

In the past large cholera outbreaks in refugee camps came with an attack rate of 1-5% with a peak reached after 2-4 weeks; duration of epidemic varies from 1-3 months.

While OCV is a safe and effective tool against cholera, it does not provide protection against other causes of diarrhea, and it remains important to follow the preventive measures for diarrheal diseases: drinking only water that has been properly boiled or treated, practicing good sanitation and food hygiene, and seeking prompt treatment at the health facility if you are sick.

In the last week, at least 10,292 cases of diarrhea have been reported and treated from across the settlements and camps.

“This critically important initiative to protect already vulnerable populations against cholera is welcome and the collaborative efforts of all involved are laudable. But there are still multiple and serious public health risks for this refugee population and a massive scale up of resources and the overall response is needed to mitigate further risks of life threatening illnesses,” said IOM Senior Regional Medical Officer for Asia and the Pacific Patrick Duigan, speaking in Cox’s Bazar.