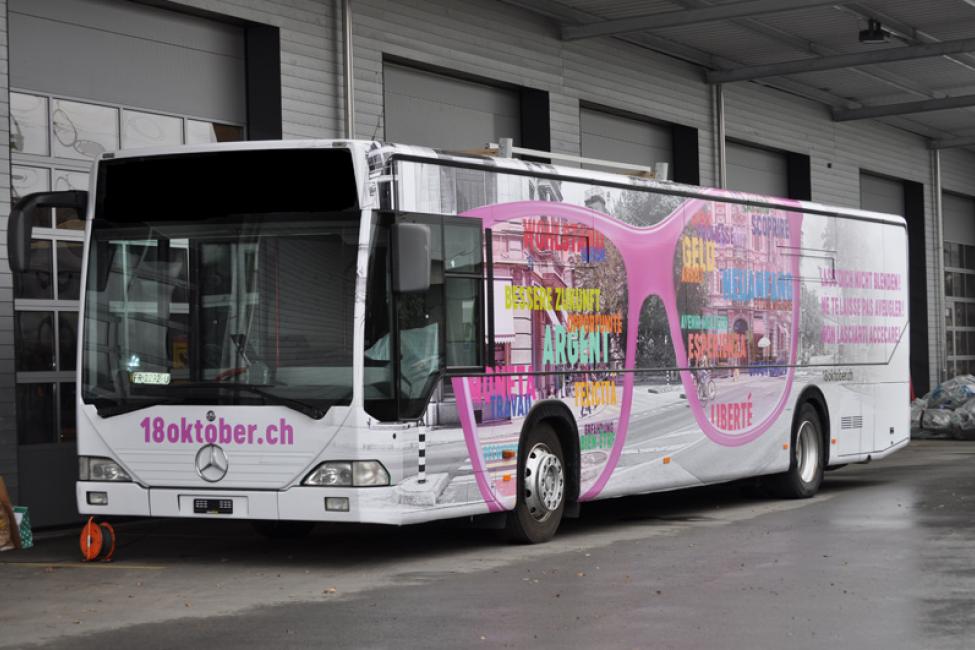 The branded bus that will tour around Switzerland to raise awareness on human trafficking. Photo: IOM Bern 2017

Brussels – IOM, the UN Migration Agency, today joins the European Union (EU), other European countries and partners throughout the region and beyond in marking the 11th EU Anti-Trafficking Day. It is observing the day through a series of events and is releasing two publications on victims of trafficking.

Trafficking in Human Beings is one of the world's most serious transnational crimes and one of the most complex human rights challenges of our time. To contribute to a better understanding of this complex phenomenon and support evidence-based policies and responses, IOM has developed and maintained a central counter-trafficking case management tool, the IOM Global Human Trafficking Database, which is the largest global database with primary data on victims of trafficking.

IOM today published its “Global Trafficking Trends in Focus” summary, which analyses IOM’s victim of trafficking data from 2006 to 2016. The analysis is based on data from 50,000 victims of trafficking that have been assisted by IOM during this period, which is the largest database of human trafficking case data worldwide. Later this year, IOM and partners will be launching the Counter-Trafficking Data Collaborative, which will make more of this data available to the public and will be the first primary, global data repository on human trafficking, with data contributed by counter-trafficking partner organizations around the world.

“We have to do more to identify, assist and protect victims of trafficking in Europe, but we also have to do more to ensure that vulnerable migrants reaching our shores are protected from exploitation,” said Eugenio Ambrosi, IOM Regional Director for the EU, Norway and Switzerland. “We have to continue to be outraged and not allow for the normalization of exploitation of migrants in Europe,” he added.

In Europe, IOM provided assistance last year to 768 victims of trafficking (VoTs) across 20 EU Member States, Norway and Switzerland. Children made up almost 35 per cent of those assisted. Trafficking of children is a growing trend and of concern for the EU, as well as an important part of IOM’s work.

Last month, IOM released Harrowing Journeys, a joint report with UNICEF based on the testimonies of some 22,000 migrants and refugees, including some 11,000 children and youth, interviewed by IOM on the Eastern and Central Mediterranean migration routes. The report revealed the appalling levels of human rights abuses faced by migrant and refugee children and youth trying to reach Europe, finding that 77 per cent of those traveling along the Central Mediterranean route report direct experiences of abuse, exploitation, and practices which may amount to human trafficking.

IOM is also publishing the official English version of the Report: “Human Trafficking through the Central Mediterranean Route”, produced this year by IOM Italy in the framework of the activities carried out by Anti-Trafficking teams deployed at landing points in Sicily, Apulia and Calabria. The report highlights how women and unaccompanied children of Nigerian nationality are among those most at risk of being trafficked for the purpose of sexual exploitation. The number of Nigerian women and girls that arrived by sea has increased by 600 per cent between 2014 and 2016.

In addition, IOM is joining forces with national partners today around Europe to raise awareness on trafficking in human beings and to shed light on the pressing issues around this phenomenon.

In Austria, IOM will support an event hosted by the Austrian Task Force on Combating Human Trafficking.  Othman Belbeisi, IOM’s Chief of Mission for Libya, will present on the subject of human trafficking in conflict and crisis situations. IOM will also host an interactive workshop at the event that will explore the line between human trafficking and exploitation. The event is organized in cooperation with the OSCE Special Representative and Coordinator to Combat Trafficking in Human Beings and the Vienna Institute for International Dialogue and Cooperation (VIDC).

IOM, as one of the leading anti-trafficking organizations in the world, has worked globally with partners since 1994 to prevent and fight trafficking in human beings. IOM, together with its partners, has assisted tens of thousands of trafficked persons since that date. In 2016 alone, IOM provided direct assistance to 8,500 victims of trafficking around the world.