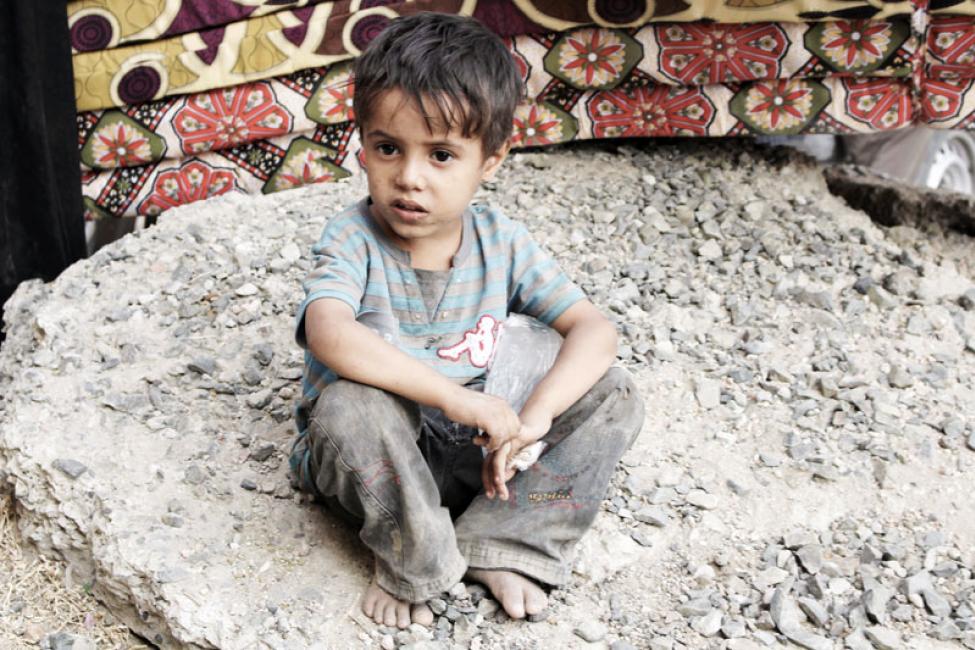 A young boy displaced by the conflict in Yemen. He is one of two million displaced Yemenis. Photo: IOM 2017

A young boy displaced by the conflict in Yemen. He is one of two million displaced Yemenis. Photo: IOM 2017

Yemen - Two years of conflict has made Yemen the biggest humanitarian crisis in the world. An imminent attack on Al Hudaydah port and city will likely lead to further loss of life, displacement and suffering for the Yemeni people. The UN Migration Agency (IOM) and humanitarian partners in Yemen are increasingly worried about the level of assistance and protection needed in such an increasingly catastrophic humanitarian crisis.

The UN Humanitarian Country Team has called for financial support to help the estimated 18.8 million people in need, including conflict-affected Yemenis and migrants. More than half of them require immediate humanitarian assistance to save their lives, with women and girls being especially vulnerable. Up to nine million people are facing extreme food insecurity. The country is on the brink of famine with more than eight million facing acute shortages of clean water and sanitation. With the collapse of the healthcare system and more than half of health facilities not functioning, 8.8 million people are in acute need of access to healthcare. During the recent High-Level Pledging Event on Yemen, governments pledged USD 1.1 billion to support the humanitarian response out of the over USD two billion requested for 2017.

The worsening of the humanitarian situation countrywide, coupled with the unending ground fighting and air strikes, are causing major issues in reaching the most vulnerable people among the more than two million displaced population and their host communities. Access issues exacerbate problems in a country where salaries have not been paid for more than eight months, imports are restricted and infrastructure has totally collapsed.

“A minimum of 400,000 people will flee the city eastwards, once Al Hudaydah is under attack,” said Mohammed Abdiker, IOM’s Director of Operations and Emergencies. “This is in addition to the already desperate situation of more than two million displaced people and their conflict-affected host communities. Even without this attack on Al Hudaydah, all emergency response in Yemen is facing huge difficulties of access, financial support and immense needs,” he said.

Sana’a Governorate, where the capital city is located, already hosts 270,000 displaced people. Families and communities there have limited access to water, food, core relief items and healthcare. Shelter, in this rainy season particularly, is also becoming an issue. A new cholera outbreak has been registered in the city, as well as countrywide. An additional influx of thousands of displaced people from Al Hudaydah will further worsen the situation, putting additional burdens on the unfunded and under-resourced humanitarian response. This will also further complicate IOM’s evacuation of vulnerable migrants through Al Hudaydah Port.

“Humanitarian action alone can never bring the peace all people in Yemen deserve. The UN Migration Agency advocates for dialogue and peace talks, rather than the use of military force, which puts the lives of Yemenis and humanitarians in extreme danger. More than ten first responders have been killed while helping the injured,” said IOM’s Abdiker.

“If all parties to the conflict do not come around the negotiation table to prevent further military escalation and end violence, humanitarian workers will not be able to continue to respond to increased needs, while helping those already greatly affected by the conflict. An attack on Al Hudaydah city will put all humanitarian organizations in a situation of prioritization in a country where every single person should be a priority,” he added.

IOM is prepared to respond to the possible influx of the displaced population from Al Hudaydah eastwards. However, with the scarce resources that it has received so far to help the already existing two million displaced people and hundreds of thousands of stranded migrants, IOM is concerned that no contingency plan will ever be able to fully respond to the scale of needs induced by escalated and even continued fighting. Financial support and increased humanitarian access are urgently needed.