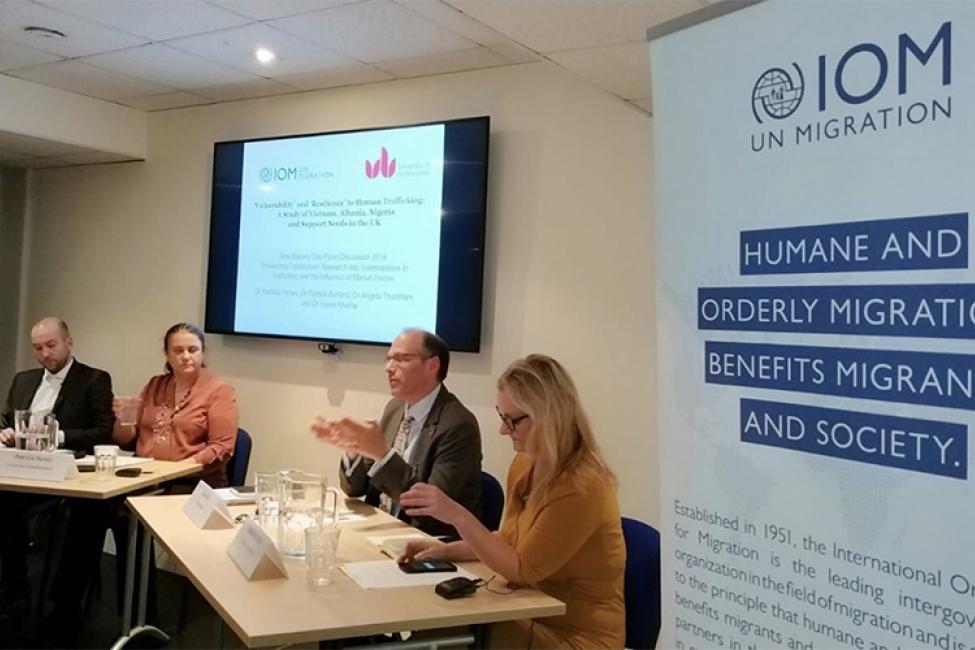 London – Prevention, remedy and ultimately the eradication of human trafficking and slavery will require a more nuanced understanding of both the factors that make people vulnerable and the influence of market forces, according to the conclusions of a panel hosted by IOM, the UN Migration Agency, in London on Thursday (25/10).

“One myth that we must debunk is that slavery is an issue of the past,” said Dipti Pardeshi, IOM UK Chief of Mission.

Pardeshi explained that there are more people in slavery-like conditions now than any time in history. It is not localized to specific regions, countries, states, cities or towns.

“Unfortunately, human trafficking is everywhere and the only way to eradicate it is through cooperative national and international multi-stakeholder responses,” Pardeshi continued.

Panellists at the event, hosted by IOM’s London office to mark Anti-Slavery Day 2018, agreed that a more nuanced and holistic understanding of the vulnerabilities contributing to human trafficking and the effects of labour conditions was needed for effective action against the phenomenon.

“In order to prevent human trafficking, we must first better understand what makes people vulnerable to trafficking. The interim findings reveal that people’s families and the households they grew up in can be significant causes of vulnerability to human trafficking,” said Patrick Burland, Senior Project Officer at IOM UK.

At the event, panellists presented their interim findings from two ongoing research projects, including the launch of three reports on research events with local experts that took place in Albania, Viet Nam and Nigeria as part of the project “Vulnerability to human trafficking:  A study of Viet Nam, Albania, Nigeria and the UK”. This is a partnership between IOM UK and the University of Bedfordshire which has interviewed 160 survivors of trafficking and expert stakeholders across the countries.

A second project explored exploitative conditions in the seafood supply chains of Indonesia, based upon the well-documented exploitation of migrant workers on fishing vessels in South East Asia. Conducted by Coventry University in the UK, and supported by IOM Indonesia, Issara Institute and Universitas Indonesia, the research is expected to produce evidence-driven recommendations for supply chains and governments to better address human trafficking in fisheries.

IOM UK, in partnership with the University of Bedfordshire, expects to present its final conclusions and recommendations for governments and stakeholders in the countries in spring 2019.

“What we see in these interim reports is the result of these events, demonstrating a contextual understanding of the key issues relating to human trafficking within Albania, Viet Nam and Nigeria,” said Patricia Hynes of the University of Bedfordshire.

“We know there are no silver bullets to prevent the invisible crime of human trafficking and doing so will take time and commitment. We found a drive to understand it, to protect people who have experienced it and, encouragingly, to coordinate efforts to achieve this goal,” she added.