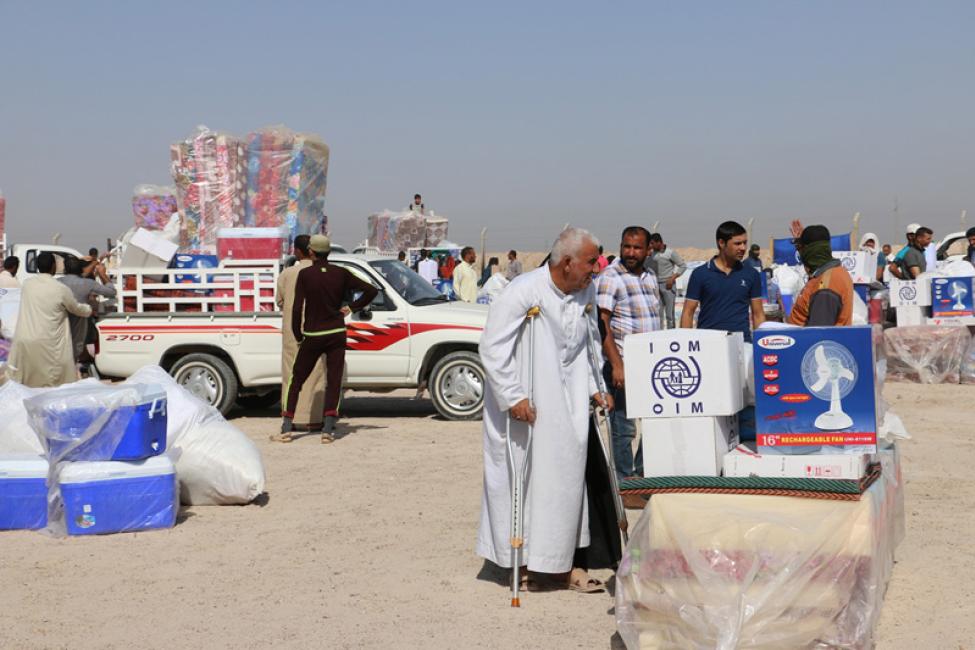 IOM staff spoke with Noriah, a mother of seven children recently displaced from Al-Qaim, at an IOM mobile medical team clinic. “We have been displaced because of the very bad situation and the lack of food. Our lives used to be normal. After ISIL entered the city, my children stopped studying and our lives became very difficult. We got to a stage at which I could not always afford to feed my children,” said Noriah.

“We decided to move at night; we borrowed money from our relatives to pay the smugglers. We fled only in the clothes that we were wearing. We walked with other families who were also trying to get out of the city. Our journey lasted for three days via the Trabeal road and then to Kilo 160 until we reached the camp of Amiriyat Fallujah.”

The locations for the mobile medical teams are determined according to the needs of the population and in coordination with Anbar’s Department of Health. Current locations include Amriyat Al-Falluja, Falluja, Heet, Kubbaissa, and two locations in Garma. These medical services are life saving for many newly displaced people who suffer from health conditions that were complicated by insufficient access to health assistance in ISIL-held areas.

In addition, IOM medical teams are running a tuberculosis response and prevention project in several governorates, funded by the Global Fund. In Anbar, this project provides support to the National Tuberculosis Programme centres in Anbar; conducts screening for suspected cases and awareness sessions on tuberculosis symptoms and prevention; follow-ups on tuberculosis patients and provides them with transportation and high-protein foods; as well as training sessions for staff members of Anbar’s Department of Health.

IOM Iraq Displacement Tracking Matrix has been monitoring the West Anbar crisis since January 2017, when significant displacement movements were already taking place due to hostilities in the area and in anticipation of major military operations. Of the total displaced, 42,800 are registered in camps, and more than 22,150 are in out-of-camp locations (over 21,500 in private settings, and 570 in critical shelter arrangements, including unfinished buildings). The majority of the displaced from West Anbar are within Anbar Governorate; more than 28,400 have been displaced to the district of Falluja, and over 22,000 to Ramadi. Others have fled to Baghdad governorate (over 4,200) and Erbil governorate (4,400).

West Anbar displacement data can be found at: http://iomiraq.net/article/0/west-anbar-crisis-displacement-overview-31-october-2017

Iraq displacement data can be accessed at: http://iraqdtm.iom.int