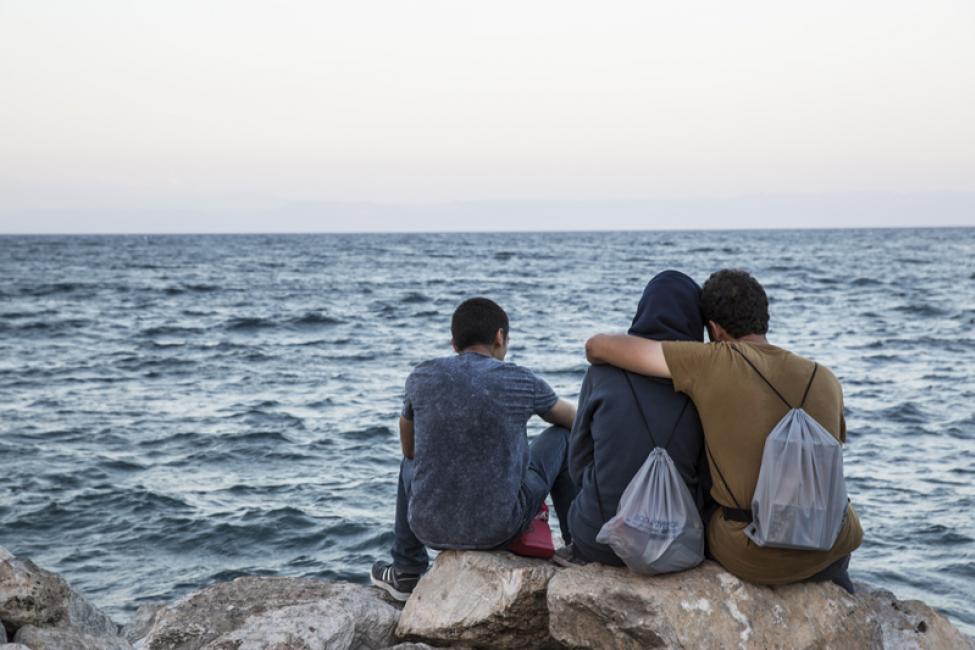 Migrants and refugees in the Greek island of Lesbos. Photo: Amanda Nero/IOM

Brussels – A new visa for vulnerable migrants, the Global Compact for Migration (GCM), the Common European Asylum System, and voluntary return and reintegration (AVRR) policies are the focus of recommendations that IOM, the UN Migration Agency, is releasing today (06/12) ahead of Bulgaria’s tenure at the helm of the Presidency of the Council of the European Union (EU) beginning in January 2018.

Eugenio Ambrosi, IOM Regional Director for the European Union, Norway and Switzerland presented IOM’s recommendations to the Bulgarian Government during a visit to Sofia. He said the Bulgarian Presidency will lead the Council of the EU at a pivotal time, as the need for intensified cooperation between countries, better protection of migrants, and more safe and regular migration pathways have captured global attention.

“Bulgaria will be leading the rotating EU Presidency through a critical period in the first six months of 2018. Migration challenges will remain considerable in the Mediterranean and in neighbouring regions, and will continue to impact the European asylum system. At the same time, migration policy is being defined internationally in the lead up to next year’s Global Compact for Migration,” said Ambrosi today in Brussels.

“Our recommendations are rooted in IOM’s conviction that migration is not a phenomenon that should be stopped or managed on a crisis footing, but a human reality that must be governed with political courage, evidence-based vision, and a human-centered approach,” he said.

IOM’s new recommendations paper sets out four key points for the Bulgarian Presidency. First, IOM calls on the EU and its Member States to take a leading role in the negotiations for the GCM to ensure the adoption of an ambitious agreement that becomes a unifying framework of common principles, commitments and understanding among Member States on all aspects of migration.

The second recommendation is for the realization of a reformed Common European Asylum System (CEAS) which sets high standards of fairness and solidarity. Specifically, improvements to the relocation mechanism – such as making it permanent and automatic – and the adoption of a common and unified approach to resettlement through a Union Resettlement Framework are two crucial elements in this regard.

While the CEAS focuses on international protection, many people who are not seeking asylum on the migration routes still have specific protection needs. IOM therefore proposes in its third recommendation the creation of a new EU visa for the most vulnerable migrants. The visa would help Member States to manage the movement of eligible migrants with specific protection needs, and to uphold their fundamental rights. It would also help to strengthen external border and identity management, which can bring improved security to both migrants and states.

Finally, IOM calls on the incoming Presidency to ensure a rights-based, non-discriminatory and comprehensive approach in return and reintegration policies. Assisted voluntary return and reintegration (AVVR) is an indispensable part of a comprehensive approach to migration management. However, return migration should support, rather than define, an effective migration governance framework.

"IOM welcomes the Bulgarian Presidency's commitment to prioritizing migration. We are ready to support the Presidency and EU member states through its global expertise and operational tools to advance our joint commitment to improving global migration governance and ensuring that each and every migrant is assisted, with their fundamental rights upheld," said Ambrosi.

IOM's twice-yearly recommendations to the rotating EU Presidencies are guided by its Migration Governance Framework (MiGOF) which is the first, and so far only, global detailed articulation of planned and well-managed migration policies.

The six-month incumbent Presidents of the Council of the EU work together in groups of three in the interest of continuity and coherency. The current Presidential trio comprises Estonia (July/December 2017), Bulgaria (January/June 2018) and Austria (July/December 2018). The presidential representatives chair meetings at every level and propose the guidelines needed for the Council to take decisions.

IOM's recommendations can be downloaded here in PDF.