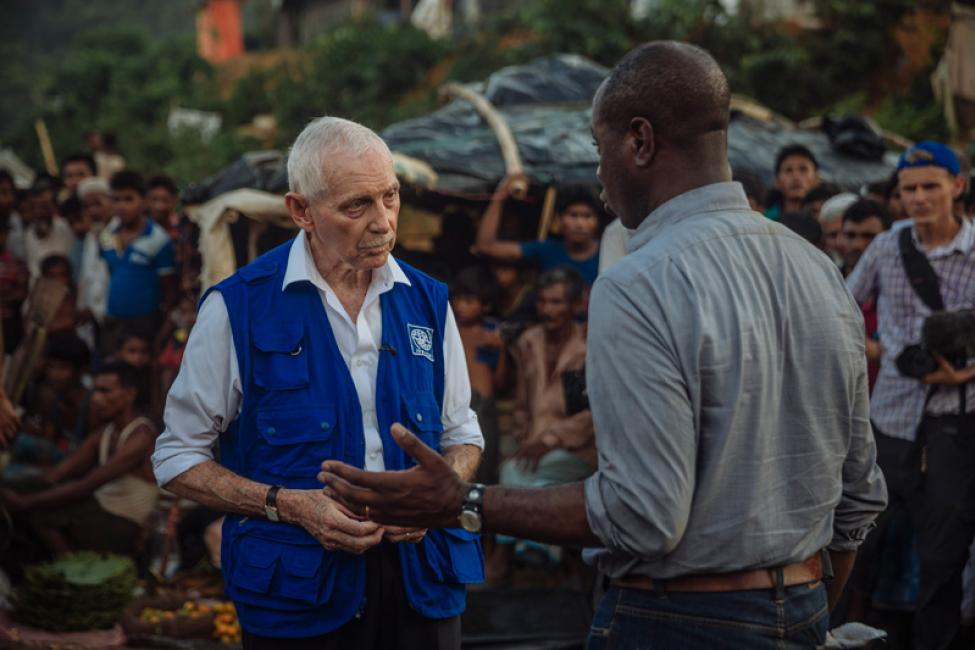 Cox’s Bazar – “The world has rarely witnessed a refugee crisis of such speed, with more than half a million crossing into Bangladesh in just over a month. The arc of misery that exists between Northern Rakhine State and Cox’s Bazar is deeply upsetting - too many people suffering desperately with too little support,” said the UN Migration Director General William Lacy Swing today (18/10), as he completed a three-day visit to Bangladesh. IOM, the UN Migration Agency, together with its partners is coordinating the humanitarian response to the crisis in Bangladesh in support of the Government's efforts.

By 15 October, 582,000 Rohingya refugees had sought safety in Bangladesh following an outbreak of violence in Northern Rakhine State, Myanmar, on 25 August. Yesterday (17/10), at least 1,500 more refugees crossed into the country – men, women and children waded through a river as monsoon rains poured down.  Today (18/10), the Bangladesh Government also confirmed it will move an estimated 15,000 people currently stranded in “no man’s land” near the Anjuman Para border crossing point in Cox’s Bazar’s Ukhia District, into more appropriate settlement areas.

Director General Swing began his visit with a day-long tour of the makeshift settlements in Ukhia and Teknaf sub-districts, where an estimated 800,000 refugees are now living, to observe the scale of the crisis and the sheer enormity of needs.

“I saw women carrying small babies, only a few days old, sometimes born while their young mothers were fleeing deadly violence in torrential rains. I saw young children, who had lost not just their parents, but any remnants of hope. We must make a commitment to these women and children, who are among the most vulnerable in the world, that we will do everything in our ability to ensure that their suffering stops here. If adequate resources are not mobilized by the international community, we cannot make that commitment. Thousands will suffer without food, shelter, health care and protection,” said Swing.

During his visit, Director General Swing also met with Bangladeshi officials to discuss further support to the country and the life-saving assistance that it is providing to Rohingya refugees. Bangladesh Government representatives reconfirmed their commitment to allow Rohingya seeking protection from violence in Myanmar to continue entering the country. They also confirmed their willingness to consider additional options for the settlement of new arrivals, including the creation of more manageable smaller camps to alleviate public health and security concerns.

“The needs on the ground are enormous, in quantity and complexity. I am impressed by the Government of Bangladesh’s mobilization of their own resources, as well as the local community’s support, from identifying land to be converted into settlements to providing food, water and healthcare to Rohingya refugees. We cannot forget, who the first responders to this emergency were and who remains on the frontline of the response – Bangladeshis,” said Swing.

“However as the crisis has unraveled at an unprecedented speed and scope, there are still gaps in the response capacity on the ground and additional services are required to ensure adequate and lifesaving assistance to the Rohingya refugees,” he noted.

Director General Swing highlighted the critical importance of a peaceful resolution to the crisis in Myanmar, based on the recommendations of the Advisory Commission on Rakhine State established by Myanmar’s Office of the State Counsellor and the Kofi Annan Foundation. “Humanitarian aid alone is not a solution. The root causes of this crisis are in Myanmar and there can be no lasting peace in Rakhine without inclusive development. We see the recommendations as a roadmap to peaceful co-existence and welcome the Myanmar Government’s commitment to implementing the Commission’s findings. “The first step in that implementation process will be to urgently allow UN agencies to resume their work in Rakhine State,” he said.

Lifesaving services delivered by IOM and its partner agencies include clean water and sanitation, shelter, food security, healthcare, education and psychosocial support for the most vulnerable individuals, many whom are suffering from acute mental trauma or are survivors of sexual violence.

Since late August, IOM has scaled up quickly – shelter has been provided to 379,000 individuals, while 47,000 health consultations have been provided. IOM has contributed 200 staff to assist in a Ministry of Health-led Oral Cholera Vaccine (OCV) campaign that has reached 679,000 people. Some 678,000 litres of water have been distributed, along with over 11,000 dignity kits. IOM staffing has also been boosted with 443 staff and community volunteers in country.

Earlier this month, the UN launched a Joint Response Plan, in order to sustain and enhance the large humanitarian effort already under way. The plan requires USD 434 million to meet the life-saving needs of all Rohingya refugees and their host communities – together an estimated 1.2 million people – for the difficult months to come.

IOM’s funding requirements within this plan amount to USD 120 million. A critical pledging conference for the crisis organized by the UN Office for the Coordination of Humanitarian Affairs, the UN Refugee Agency (UNHCR) and IOM, and co-hosted by the European Union and Kuwait will take place in Geneva on 23 October 2017. The conference will provide governments from around the world an opportunity to show their solidarity and share the burden and responsibility.

“IOM, the Government of Bangladesh and our partners have made a commitment to strengthen support to Rohingya refugees. Now it is time for the international community to echo that support,” Swing noted.