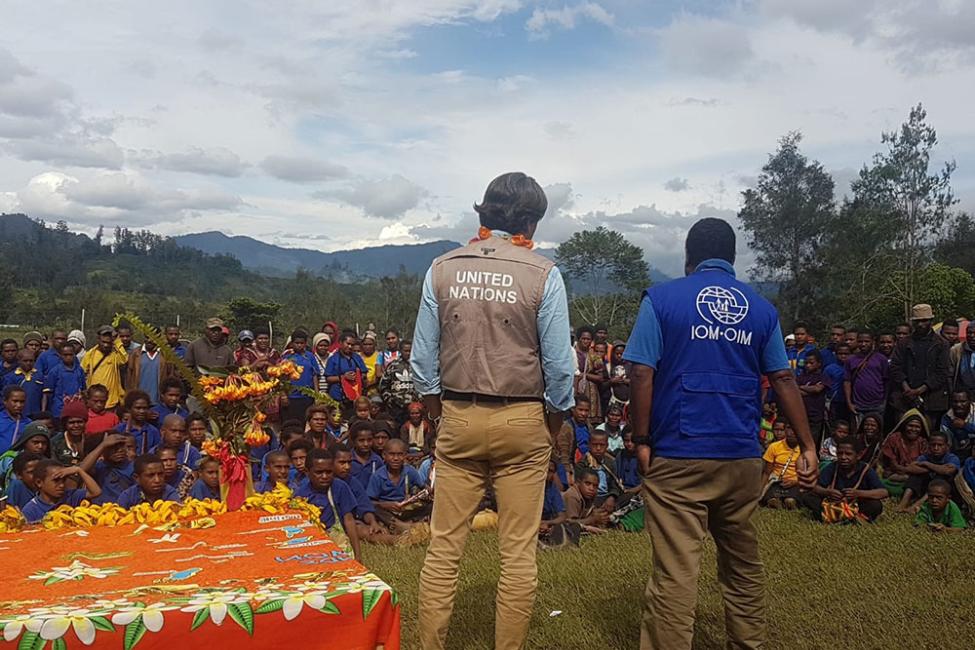 Port Moresby – UN Resident Coordinator in Papua New Guinea Gianluca Rampolla, together with IOM, UNDP and UNICEF representatives, this week visited Humbra in Southern Highlands province – one of the communities hardest hit by a 7.5 magnitude earthquake in February 2018.

IOM displacement tracking conducted in March 2018 showed that 289 Humbra households needed shelter assistance due to damage caused by the quake. Based on IOM’s survey findings, IOM provided shelter tool kits and training on techniques for building back safer. UNICEF stepped in with latrines to improve sanitation.

"After the (Build Back Safer) training I realized that where I had previously built my home was not safe. It was at risk of landslide and flooding. I decided to rebuild it on flat land away from the valley. Now it is much safer," said Diana Joel, a Humbra community volunteer.

While the community welcomed support from the UN, they also came together to fundraise among themselves for much needed facilities. "After the earthquake, our classroom was badly damaged. Each family contributed PGK15 (USD 5) and together we rebuilt it," said Topa primary school headmaster Tom Kink.

“People from this community are applying the knowledge received from the training in rebuilding their homes. Such measures, including support provided by the UN, is promoting the increased resilience of local communities,” said UN Resident Coordinator Rampolla.

People trained in safe shelter construction are passing on the knowledge gained to other community members, including voluntarily participating in shelter reconstruction work in their communities, he added.