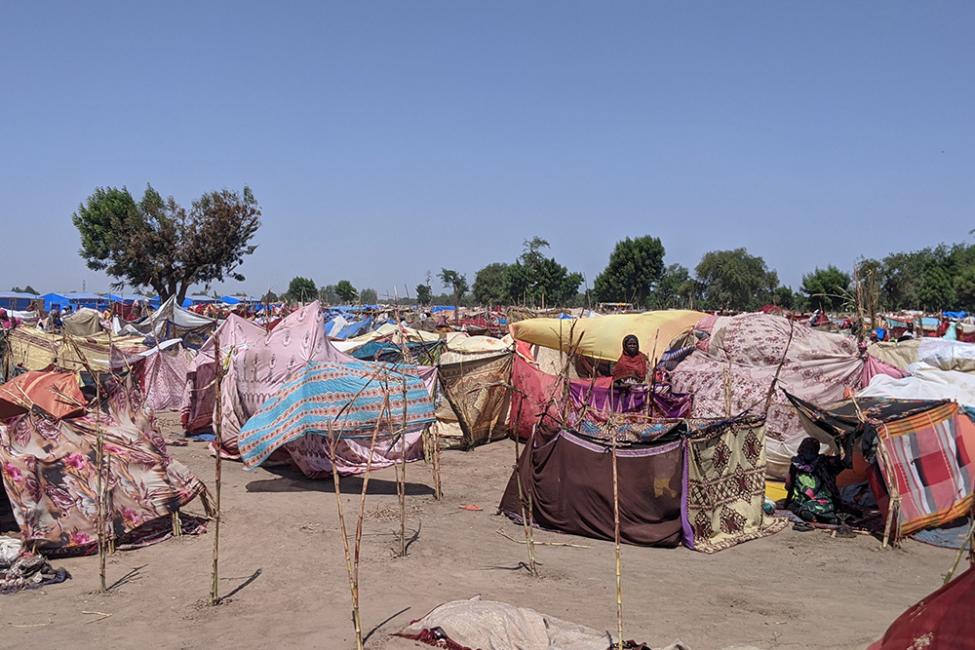 A makeshift displacement site in the 9th district of N'Djamena. Photo: IOM/Daniele Febei

N’Djamena – An estimated 11,500 people have been forced to leave their homes since late October as a result of flash floods in N’Djamena, Chad’s capital city. The floods, which caused catastrophic damage, are the result of rising water levels which led to the overflow of the Chari River and an embankment break in N’Djamena’s 9th district.

IOM, in coordination with Chadian authorities and the humanitarian community, is providing leading support to site management and site development including shelters, water supply, solar lights and non-food items. The organization is also collecting data through the Displacement Tracking Matrix (DTM) to evaluate the needs of the displaced persons. These floods add a layer of vulnerability to a population that had already been impacted by severe floods last August.  More than 100 households were supported then by IOM. Today, more funding is urgently needed as water levels continue to rise.

“It is now urgent that we scale up efforts to quickly provide suitable shelter and emergency response support to the disaster victims as there is concern for COVID spread in tight living spaces as well as risk of water-borne diseases that are endemic in the region,” said Anne Schaefer, IOM Chad Chief of Mission.

In the displacement site, IOM built temporary shelters and organized sensitization sessions on fire safety and protection from related hazards. IOM says much more needs to be done to support the people most in need, including with food, sanitation and education in times of crisis.

The Chari and the Logone rivers, which flow through the Central African Republic, Cameroon and Chad, are among Lake Chad’s main sources of water. But there is an irregular flow, with low flow between February and July, and exceptionally high flow between August and November, particularly when fed by rain waters during the rainy summer months.

Embankments and dikes were built around the river to avert potential catastrophes, but when the rains are heavy the river overflows into surrounding areas, causing considerable human and material damage.
“A comprehensive response is needed to profile the people most affected and vulnerable to flooding, and to strengthen emergency preparedness and disaster risk reduction and management in flood-prone areas including support to Government authorities in planning, early warning and rapid response to floods and other catastrophes,” says IOM’s Schaefer.

The extreme rainy season of 2020, which continues in the south of the country, is leading to an increase in water levels. Upstream, risk also is rising in the Lac Province, where more than 393,000 people are currently displaced as a direct consequence of climate change and insecurity from actions of Boko Haram and other non-state armed group actions.