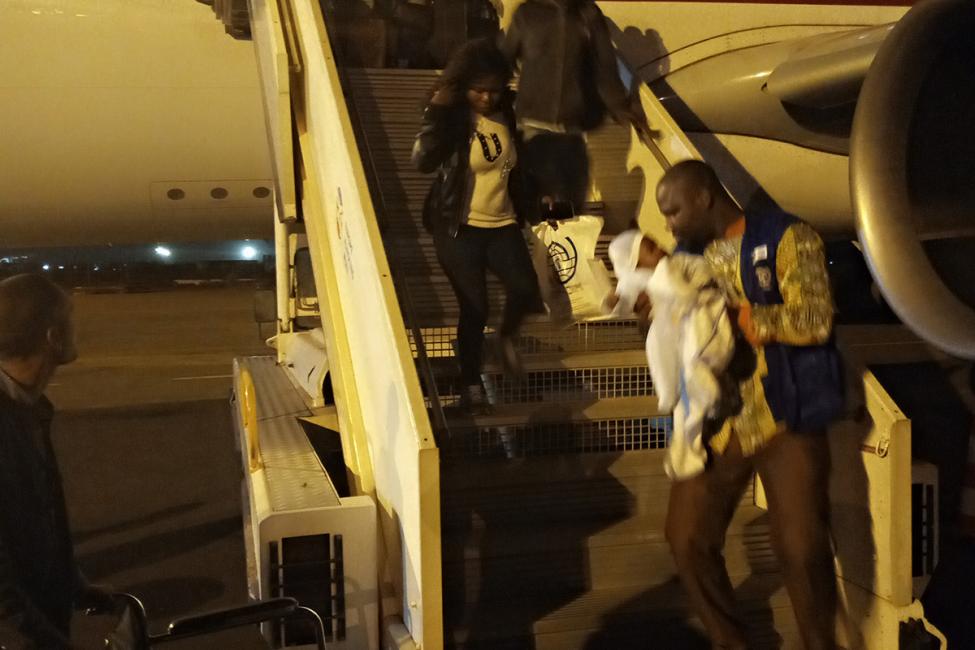 Bamako – Assisting migrants to return to their countries of origin sometimes requires creativity and the cooperation of several IOM member states. This month, Mali stepped up to offer its territory as a transit point for West and Central African migrants heading to eight countries of origin after being stranded in Algeria.

Last week (13/11) the International Organization for Migration (IOM) assisted 108 stranded migrants to voluntary return from Algiers, Algeria’s capital, to their countries of origin. Thirty of those passengers had migrated from Mali, itself. The other 78—including 24 women—returned to eight different countries: Guinea, Nigeria Ghana, Senegal, Côte d’Ivoire, Benin, Cameroon and the Democratic Republic of the Congo.

On this second flight from Algeria, the passengers were selected for their vulnerability and special circumstances—for example, many were women—including single mothers—and children. IOM spokesperson Florence Kim explained having Mali as a transit point averts leaving smaller groups of migrants originating from countries—such as Benin—having to remain stranded in Algeria and it allows to organize their returns by air or land directly to their countries.

“It is essential to guarantee the safety of migrants willing to return home. The 78 non-Malians transited through Mali to avoid being stranded in Algeria too long,” explained Pascal Reyntjens, IOM Chief of mission in Mali. “An efficient transit reception mechanism also helps ensure a thorough identification of the assisted migrants including the confirmation of their vulnerabilities.”

Before departing, IOM protection team assessed the passengers to ensure their safe and sustainable return. Upon arrival in Bamako, Mali’s capital, non-Malian migrants were accompanied by IOM Mali staff to their respective countries of origin via land and/or air, where they received with post-arrival and reception assistance.

Regardless of the country of return, all returnees will receive immediate assistance upon arrival, including food, pocket money and onward transportation to their final communities of origin. In-kind reintegration assistance will also be available to start a new life back home.

The charter was made possible thanks to the cooperation and support of the Algerian government, the Malian government, in partnership with Air Algérie and with the contribution of the European Union and the Italian Ministry of Foreign Affairs and International Cooperation.