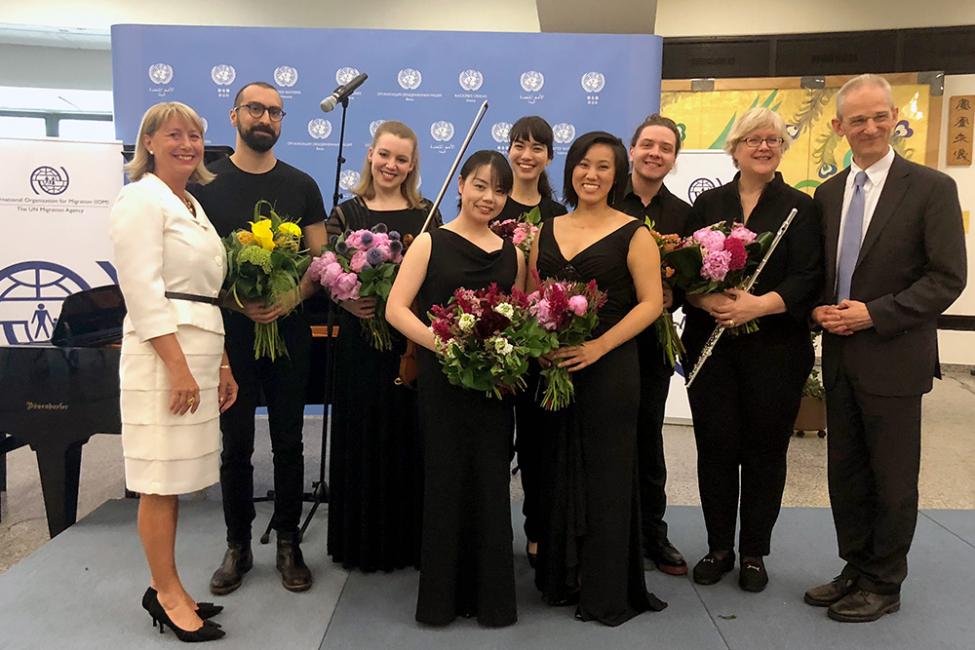 Vienna – The “Voices of Migration” concert, the first ever musical event of its kind to be held at the United Nations, took place in the Rotunda of United Nations Vienna International Center yesterday, showcasing the richness of culture and art that migration brings. Co-hosted by IOM, the UN Migration Agency, and the United Nations Information Service (UNIS), the historic concert featured powerful performances, including two world premieres by migrant composers from the Islamic Republic of Iran and Turkey, performed by a diverse group of world-class musicians.

“Migration is a complex issue and one that dominates world news,” said Argentina Szabados, Director of IOM’s Regional Office in Vienna. “All too often we see sensational headlines where migration is portrayed in a negative light. However, there is a more positive story of migration which we wish to tell – and celebrate – here today. It is the story of talent, of ambition, of hard work in the face of adversity. Migration brings diversity, and this rejuvenates and elevates culture, such as cuisine, art, fashion and music.”

Through solos, duets, and trios for flute, violin, piano, and soprano, the audience was transported to the late 17th century with Bach’s poignant Fugue from Sonata in G, to the mid-18th century with an excerpt from Mozart’s Concertone, KV 190 for flute, violin and piano, and to a more contemporary era with an excerpt from Sonata for flute and piano, op. 61 by Austrian composer Richard Stöhr.

Bärli Nugent’s inspiration came from her Austrian mother who studied under Richard Stöhr at the Musik Akademie, before he was forced to flee during the Anschluss. “Music was where I found my voice,” she said. “My goal has always been to share stories and change lives through music. I am an artist-citizen seeking to make a contribution towards understanding and fellowship amongst peoples.”

The highlight of the programme was the world premiere of two dynamic works by migrant composers whose musical creations were inspired by their own migration stories and the current migration crisis. One of the works was “Aylan Bebek” for flute and piano by the young Turkish composer Cem Güven. It was inspired by the story of Aylan Kurdi, the three-year-old Syrian boy whose lifeless body, photographed on a Turkish beach after his family’s failed attempt to reach Greece, became an image that shocked humanity.

Shayan Mokhtarani, a native of the Islamic Republic of Iran, had his Sonnet for soprano, flute and piano premiered yesterday as well. Shayan said, “What I like about this event is that it celebrates diversity and shows the beautiful side of migration which is something we need in the current political climate.”

Martin Nesirky, Director of the United Nations Information Service in Vienna, remarked that yesterday’s concert highlights how the benefits of migration can outweigh the challenges. Quoting UN Secretary-General Antonio Guterres, he said, “We must all engage in a discourse on migration that is respectful and places our collective humanity at the centre of the debate – a debate in which facts are not prejudice and are used as the basis for addressing its challenges.”

Nugent hopes to continue working with this group of musicians, to discover others, and to organize similar performances in other parts of the world. There are many more stories to tell to change today’s toxic narrative of migration, and this is just the beginning.

To read more about Barli Nugent and the journey that led to her curating this unique musical selection, read here: https://rovienna.iom.int/story/finding-my-migrant-voice