IOM and Government of Uzbekistan grew steadily since 2015 with the country joining IOM as a member-state in 2018 (membership officially started in March 2019). Accredited in April 2021, IOM Uzbekistan’s country office is located Tashkent. IOM Uzbekistan supports Government of Uzbekistan in several thematic areas, in line with government priorities, and institutional, national and international frameworks (including the Global Compact for Migration, United Nations Sustainable Development Cooperation Framework 2021-2025 for Uzbekistan and the IOM Central Asia Regional Strategy 2021-2025).

IOM cooperation with the Government of Uzbekistan includes labour mobility and human development, migration and health, prevention of trafficking in persons, environment and climate change, migrant protection and assistance, border management, community stabilization and operational movement with the focus on promoting and protecting the rights, health and safety of migrants and their family members, mobility tracking and reintegration of returned migrants.

IOM work in Uzbekistan is aligned with the strategic priorities of the IOM Central Asia Regional Strategy 2021-2025:

IOM will focus on assisting migrants in vulnerable situations, their families and communities in the Central Asian region, building their resilience, in particular to violence, exploitation and abuse, migration-related health impacts, changes in remittance flows, as well as environmental and climate change impacts.

IOM will work to build regular, safe and dignified migratory channels, particularly to key destinations for migrant workers such as the Russian Federation, and leverage mobility, including the economic benefits and skills of migrants and diaspora, to support sustainable development at national and community levels, in line with the 2030 Agenda for Sustainable Development

IOM will support the governments of Central Asia to introduce effective, coherent and inclusive migration management policies based on evidence, ‘whole-of-government’ and ‘whole-of-society’ approach and human rights-centered principles in line with the 2030 Agenda, the GCM and state-led regional priorities and processes.

Uzbekistan is a landlocked country in Central Asia, bordering Kazakhstan to the North and West, Kyrgyzstan and Tajikistan to the East, and Afghanistan and Turkmenistan to the South. Its territory covers 440,400 km2 and comprises 14 administrative regions, including one constituent republic (Karakalpakstan) within the country and the capital city of Tashkent (the largest city in Central Asia). The country is a member of the UN, the Commonwealth of Independent States (CIS), the Shanghai Cooperation Organization (SCO) and the Organization for Security and Co-operation in Europe (OSCE). Uzbekistan has the largest population in Central Asia. Its 35 million inhabitants (2022)1 live mainly in the South and East of the Country and represent approximately half of the region’s total population.

According to official estimates, Uzbeks are the major ethnic group (83.8%), followed by Tajiks (4.8%), Kazakhs (2.5%), Russians (2.3%), Karakalpaks (2.2%), Kyrgyzs (1.7%), and others (around 5%) including Ukrainians, Azeri, Uyghurs, Koreans, Armenians, Turkmens, and Jewish. The official language is Uzbek, spoken by most of the population. Russian is also used in big cities as an inter-ethnic language. Most of the Uzbek population is Muslim (90%) and a small minority of the population (8%) follows the Russian Orthodox Church, while Catholics make up about 1%.

Uzbekistan has achieved substantial progress in transforming its economy and society since 2017. Rich in coal, oil and natural gas deposits that have not completely been explored yet, Uzbekistan is one of the world’s leading producers and exporters of cotton and textile products. The territory of Uzbekistan features large deserts, steppes, and inhabitable mountains; protected areas cover 4.6% of the country. The Western region is dominated by the arid steppe of Qizilqum that extends as far as the Aral Sea, while the autonomous Republic of Karakalpakstan occupies much of the plains area around the Aral Sea which is experiencing significant issues related to environmental degradation with water levels receding dramatically in recent years.

Migration is a critical issue for Uzbekistan, as a significant number of its active population is engaged in labour migration abroad. The country is also experiencing a high level of internal migration from rural to urban areas for employment and educational reasons. Regarding emigration, the main destinations of approximately 70% of migrant workers leaving Uzbekistan are the Russian Federation and Kazakhstan. Other destination countries include Turkey, United Arab Emirates, Republic of Korea, Europe, United States.

Internally, Uzbekistan is particularly vulnerable to climate change, experiencing increased temperatures, decreased annual rainfall, drought, soil erosion, desertification and water scarcity. Climate change, the environmental disaster of the Aral Sea and unsustainable land management practices are drivers that saw 79,942 internally displaced persons in Uzbekistan in 20182. This figure is expected to triple to reach an estimated 200,000, as the Aral Sea situation continues to cause new climate related displacements and acts as a driver for internal and international migration.3

According to data from the State Statistics Committee of the Republic of Uzbekistan (UzStat), the total number of Uzbek citizens who migrated abroad in 2017 was 6.8 million; this figure doubled to 13.8 million in 2018. More than half (58%) were men (an estimated 8 million) and 42 per cent were women (5.8 million). The countries of the Commonwealth of Independent States were the main destination for 14.2 million Uzbek nationals as 7.1 million moved to Kazakhstan, 3.1 million moved to Kyrgyzstan and 3.5 million moved to the Russian Federation, while 531,000 people (4%) migrated to Korea, Turkey, China, the United States and Germany.

In 2021, IOM launched its Comprehensive Action Plan for Afghanistan and Neighbouring Countries 2021-2024 (CAP) to lay out its programmatic priorities to help Afghanistan and neighbouring countries to address crisis preparedness and response efforts to the Afghanistan situation. The CAP was revised in February 2022 and IOM Uzbekistan leads on coordination of IOM Central Asia sub-regional support to Afghanistan, which will support capacity strengthening of government and civil society in Kazakhstan, Tajikistan, Turkmenistan and Uzbekistan where Afghan migrants are present and in need of timely assistance.

In 2022, IOM will work with government and civil society partners to scale up direct assistance provision to vulnerable Afghan nationals and host community members, through non-food items, and cash-based assistance to help them to meet their immediate and essential needs. IOM will also establish a project office in Termez, in Surkhandarya region near the 137-kilometre border of Afghanistan at Termez where it will coordinate and contribute to interagency and cross-border humanitarian support to Afghanistan. IOM will also facilitate capacity building support on emergency preparedness and migration and crisis management to relevant Uzbekistan government agencies.

IOM provides direct assistance to affected populations in the aftermath of disasters and displacement, to restore their wellbeing, dignity and improve their living conditions. In 2021, during the COVID-19 pandemic, IOM Uzbekistan provided food, medicines, warm socks, and blankets to over 800 vulnerable Uzbek migrants in the Russian Federation and Kazakhstan.

Protection Assistance and Counter-Trafficking in Persons

Migrants, returnees and internally displaced persons experience acute challenges to their safety and wellbeing and are at high risk of exploitation and discrimination, in particular displaced women, returnees and IDPs of low economic means. IOM Uzbekistan works with the National Commission to Counter Trafficking in Persons and Forced Labour, Ministry of Internal Affairs, National Gender Commission, Rehabilitation Center of Victims of Trafficking, 14 partner-NGOs throughout the country to identify and reach vulnerable migrants in need of support, providing case management services for migrant groups including victims of trafficking, vulnerable or stranded migrants. IOM assisted over 2200 victims of trafficking in 2015-2020, providing them with return, rehabilitation and reintegration assistance.

Through IOM’s Assisted Voluntary Return and Reintegration (AVRR) programme, IOM Uzbekistan offers a dignified, safe and cost-effective return option for migrants who are unable or unwilling to remain in host countries and wish to return voluntarily to Uzbekistan. In 2021, IOM Uzbekistan provided return assistance and family reunification support to over 500 vulnerable Uzbek nationals who were stranded in countries with no means of return, providing assistance in reception on arrival; pre-departure and post-arrival information, psychological and medical support, onward transportation to final in-country destination; and provision of immediate and longer-term reintegration assistance.

IOM, in its role of United Nations Migration Agency, delivers and promotes comprehensive, preventive and curative health programmes which are beneficial, accessible, and equitable for migrants and mobile populations. IOM assists and strengthens Uzbekistan’s health system by enabling it to deliver migrant inclusive health services that are accessible to migrants and vulnerable populations by supporting the training of health and non-workers on the provision of migrant-sensitive health services . IOM Uzbekistan supports the capacity building of national authorities such as the Ministry of Health and the health workforce, including provision of technical advice and equipment and supplies to public health facilities. IOM has organized training for health and border management authorities to respond to COVID-19 and other communicable diseases in Uzbekistan through training of trainers to address sanitary-epidemiological control at Points of Entry, with curricular in line with International Health Regulations (IHR).

Migration is increasingly recognized as a significant factor for the achievement of the four main pillars of sustainable development: human, social, economic and environmental. Recognizing that regular migration not only provides economic opportunities for migrants and their families, which is contingent on migrants having a positive, safe and successful migration journey and experience, IOM works with the Government of Uzbekistan and civil society partners by providing technical and policy support on a wide range of migration management issues.

IOM is working with authorities to establish a pilot skills development centre for potential labour migrants in Uzbekistan. The centre will organise skills development trainings and pre-departure orientation for prospective migrants, to encourage them to make safe and informed choices ahead of departure.

As the UN Migration Agency, IOM is increasingly called upon by States to assist in addressing complex border management challenges and act with its partners in the international community to assist in meeting the growing operational challenges of migration management. In Uzbekistan, IOM has assisted the Government to implement the Advance Passenger Information (API) System that will enable immigration authorities to conduct and expedite advance checks of travellers, strengthening effectiveness of border control management and helping to facilitate safe, orderly and regular migration.

IOM maintains a strong network of government and non-government partners in Uzbekistan. The Mission assists the Government of Uzbekistan with implementation of the Global Compact for Safe, Orderly and Regular Migration (GCM). IOM chairs the UN Network on Migration Working Group in Uzbekistan and is responsible for overall coordination functions for the UN agencies in the country on migration related activities. This coordination includes secretariat support and the establishment of technical working groups to assist the government to implement and lead on migration governance activities.

IOM partners in Uzbekistan include the Ministries of Internal Aﬀairs, Foreign Aﬀairs, Emergency Situations, Health and, Mahalla and Family Support, Employment and Labour Relations, Transport. Additional government entities include the Agencies for External Labour Migration, and Social and Medical Services, and Civil Aviation; the National Commissions on Countering Traﬃcking in Persons and Forced Labour, and Gender; the State Committees on Statistics, and Customs, and the National Human Rights Center and the Center for Sanitary & Epidemiological Service.

Being a member of the IOM team requires the highest standards of efficiency, competence and integrity. As an international organization with a global mandate, IOM also aims to maintain an equitable geographical balance among its staff. As such, its recruitment efforts target, but are not necessarily limited to, nationals of its Member States. IOM is an equal opportunity employer and seeks committed professionals with a wide variety of skills in the field of migration. IOM staff work in multi-cultural environments, in which diversity and cultural sensitivity are valued. 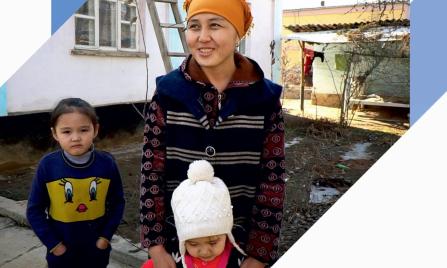 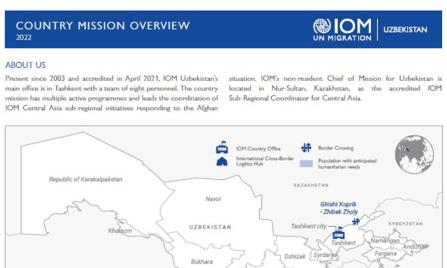