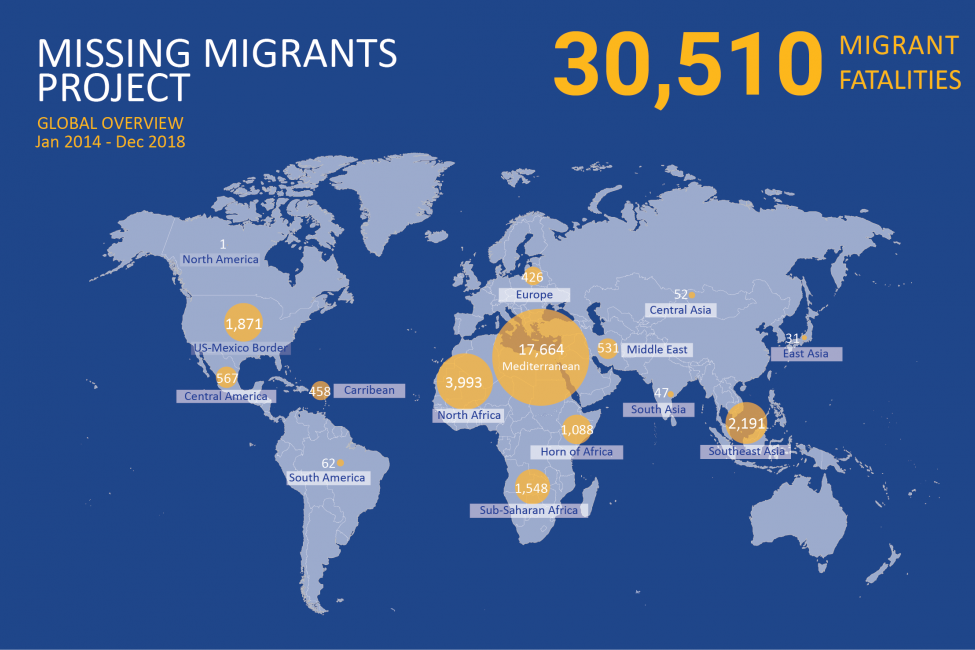 Berlin – At least 30,510 people died during irregular migration between 2014 and 2018, the International Organization for Migration’s (IOM) Missing Migrants Project reports. More than 19,000 deaths and disappearances were recorded due to drowning, not only in the Mediterranean Sea, but also in the Rio Grande, the Bay of Bengal, and many other overseas routes.

Due to the lack of official sources of information on deaths during migration, and the corresponding lack of detail on most of those who die during migration, these figures are best understood as a minimum estimate.

Nearly half of the five-year total fatalities of at least 14,795 men, women and children were recorded on the Central Mediterranean route between North Africa and Italy. The Missing Migrants Project estimates that there were at minimum 17,644 lives lost at sea on all three trans-Mediterranean routes in the last five years, equivalent in these five years to roughly ten times the number of people who drowned when the luxury liner Titanic sank in 1912.

Deaths recorded during migration throughout Africa comprise the second-largest regional total of the 30,000 deaths recorded since 2014, with 6,629 fatalities recorded since 2014. Nearly 4,000 of those deaths occurred in Northern Africa, where a lack of reliable data and extensive anecdotal reports indicate that many more migrants have died than are recorded.

In Asia, where data are similarly scarce, the deaths of more than 2,900 people were recorded during migration, including 2,191 in Southeast Asia and 531 in the Middle East.

At least 2,959 people died migrating in the Americas in the last five years, more than 60 per cent of whom (at least 1,871) lost their lives on the border between Mexico and the United States. More than 1,000 deaths were recorded in the rest of Latin America and the Caribbean between 2014 and 2018, although the difficulty in obtaining reliable reports – particularly at sea or through remote jungle areas – means that the true number of migrant deaths is likely far higher.

“Irregular migration poses significant risks to those who undertake such journeys, and safe legal pathways are urgently needed so that fewer people resort to this option,” said Dr. Frank Laczko, director of IOM’s Global Migration Data Analysis Centre (GMDAC). “Even though many focus on the Mediterranean, the truth of the matter is that people die on migratory routes worldwide.”

The main causes of death recorded in the Missing Migrants Project dataset speak to the hazardous transportation and natural conditions that migrants encounter when they travel irregularly. In addition to the 19,000+ deaths and disappearances recorded due to drowning, another 3,800 individuals died due to harsh natural conditions en route – including exposure, dehydration, and exhaustion – or due to sickness combined with lack of access to medicines.

For more than 2,000 individuals, cause of death remains unknown. For many people, their remains were recovered days, weeks or months after they died en route – often rendering it impossible for authorities to determine a cause of death. The bodies of many more are neither discovered nor recovered. In the Mediterranean, reports from shipwreck survivors indicate that, conservatively, 11,500 have been lost at sea over the last five years – whose remains have never been found.

Little is known about the identities of the 30,510 deceased recorded by IOM’s Missing Migrants Project in the past five years. Information on age and gender is available for just over one in four individuals: nearly 1,600 of the dead were children, 1,700 were women, and just over 5,000 were men. Similarly, the country of origin is available for less than half of the deceased recorded between 2014 and 2018.

To learn more about how data on migrant deaths and disappearances are collected, click here.