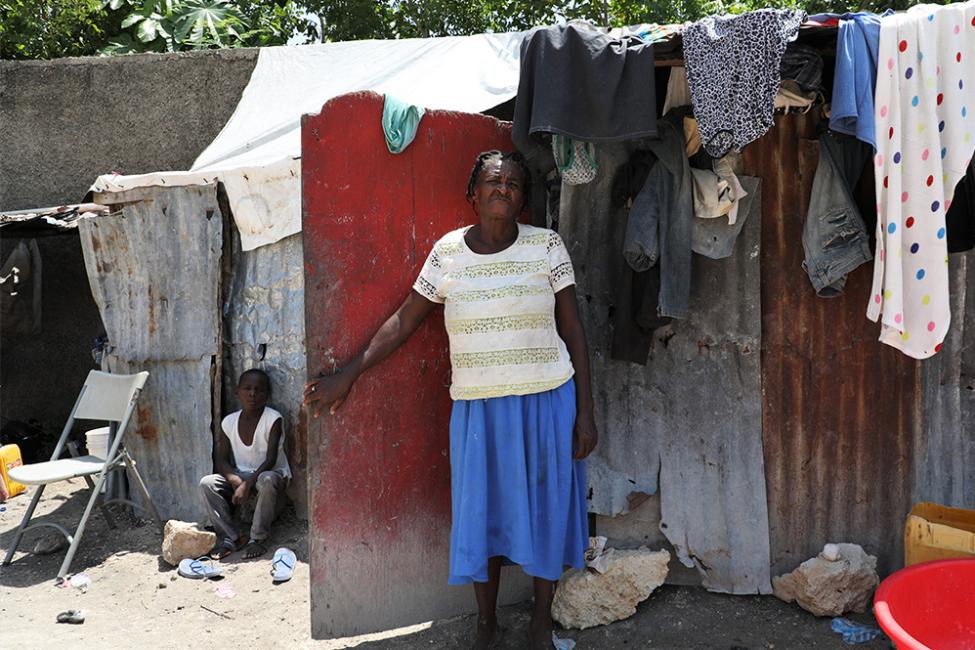 A woman stands in front of her home at a displacement site in Port-au-Prince, Haiti. Photo: IOM

Port-au-Prince – The number of people displaced by gang-related violence in Haiti’s capital, Port-au-Prince, has tripled in the past five months, according to a report published this week by the International Organization for Migration (IOM).

The assessment, conducted between June and August 2022, identified over 113,000 internally displaced persons (IDPs) in Haiti. Of these, 96,000 individuals fled insecurity in the capital, due to inter-gang violence and social unrest. An additional 17,000 individuals remain displaced as a result of the worst earthquake in a decade, which devastated the country’s southern regions in August 2021.

Gang-related violence in Port-au-Prince Metropolitan Area had resulted in racketeering, kidnappings, and wider criminal acts in a context characterized by deep inequalities, high levels of deprivation of basic human needs, and a fragmented security environment.

“Thousands of women, children, and men have been forced to leave their homes seeking shelter away from violence and destruction,” said Ulrika Richardson, United Nations Resident Coordinator in Haiti. “The United Nations is working hard hand-in-hand with humanitarian, government, and local partners to help alleviate the hardships many of the most vulnerable families are facing.”

The report was produced by IOM’s Displacement Tracking Matrix (DTM), in coordination with the Haitian Directorate-General for Civil Defense. The DTM assessments provide accurate, regular data on internally displaced populations to inform evidence-based humanitarian action. These assessments mark the growth of DTM activities in Haiti, as IOM remains one of the main data providers on population mobility, forced displacement, and the humanitarian situation in Haiti.

“This data collection represents a key contribution to the humanitarian response in Haiti,” said Michele Klein Solomon, IOM Regional Director for Central and North America and the Caribbean. “It provides a better understanding of the scale, scope, and patterns of displacement, vital to inform the planning and implementation of evidence-based responses,” she added.

An early warning system on forced displacement set up by DTM shows that close to one-fifth of neighbourhoods in Port-au-Prince were affected by generalized violence in July.

As part of the United Nations’ coordinated response to growing humanitarian needs in Haiti, IOM has provided crucial humanitarian aid to some 19,000 individuals in 2022.

IOM interventions include the distribution of relief items and medical kits, health consultations, and tailored assistance to persons with disabilities, as well as a free line providing psychosocial support and referral services to migrants and IDPs. Additionally, IOM has assisted over 6,400 families with relocation and rental allowances.

The assessments resulted in the publication of three reports, accessible at the following links: