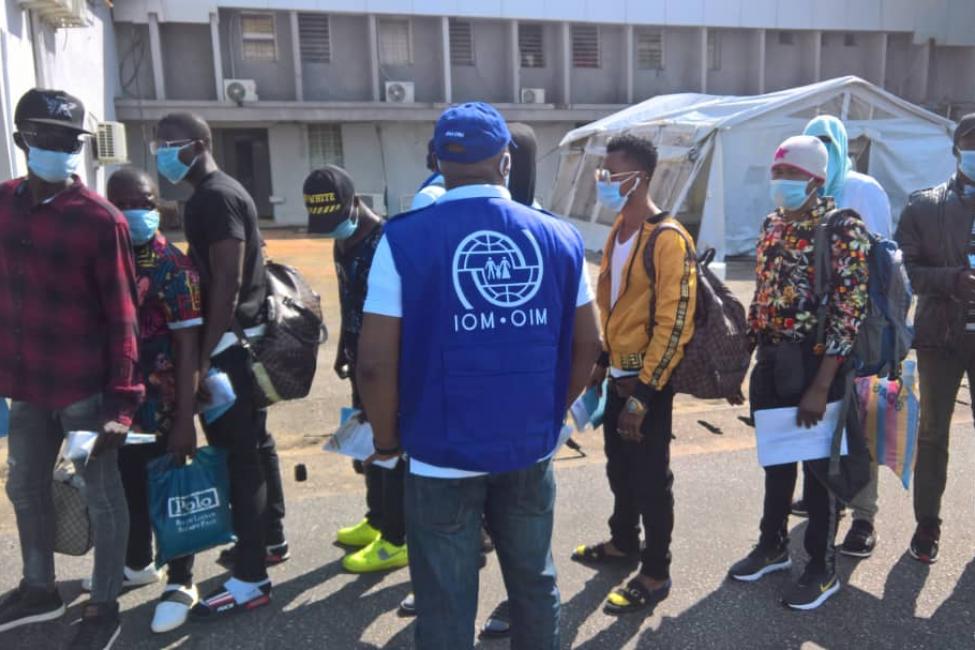 On 15th October, 99 Sierra Leoneans returned home via a chartered flight after being stranded for six months in Niger. Photo: IOM/Alfred Fornah 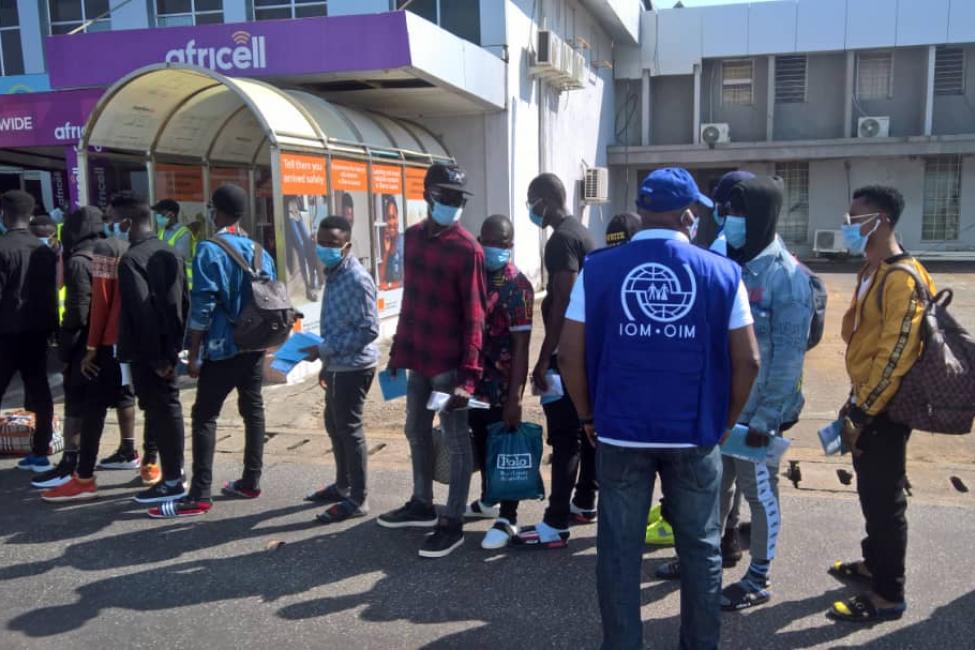 On 15th October, 99 Sierra Leoneans returned home via a chartered flight after being stranded for six months in Niger. Photo: IOM/Alfred Fornah

Freetown – After being stranded for six months, 99 Sierra Leoneans yesterday returned home from Niger via a flight chartered by the International Organization for Migration (IOM) with support from the European Union. The returnees were forced to wait over half a year in a transit centre in Agadez because of border closures related to COVID-19.

Stranded migrants have become a fixture of this pandemic year. Earlier this month, IOM ’s Returns Task Force issued a report on COVID-19's Impact on Migrants (read here) which described nearly 3 million migrants were stranded worldwide through mid-July, with many more believed to have joined those ranks in the subsequent three months.

Before their departure Thursday, returnees underwent a special online verification exercise and security checks by the Office of National Security and Sierra Leone’s Immigration Department to ascertain their nationalities. They also were tested for COVID-19. Upon their arrival, they underwent a rapid diagnostic test and began a 4-day quarantine.

Since 2017, over 3,000 Sierra Leoneans have been assisted with voluntary return by IOM. Around 70 per cent of these returns were registered in Freetown-Western Urban and Waterloo in the Western Rural Area of Sierra Leone.

With nearly two in three youths unemployed or underemployed, Sierra Leone has one of the highest youth unemployment rates in Africa.

Young people have become chronic victims of the pandemic, especially a declining economy and loss of local work options. The increased presence of idle youths in Freetown and other urban centers has become a source of insecurity for some local communities, further deepening the economic decline.

For decades, limited access to technical education and vocational training prevents many young Sierra Leonians from acquiring the skills that would make them employable. This forces thousands to migrate using irregular means, directed by smugglers. Such activity often sours into trafficking situations for migrants, with many becoming trafficked after falling for fake employment opportunities in Europe.

As COVID-19 continues to impact the socio-economic climate in the country, the rate of youth unemployment is expected to increase. Meanwhile, as the rising cost of living affects millions of households, more are tempted to migrate.

Yet, despite the dangers associated with irregular migration, youth from these regions still are willing to embark on backway journeys in search of better economic opportunities in Europe.

“COVID-19 adds a layer of vulnerability to Sierra Leonean youth; these returned migrants from Niger are typical cases,” says Akao Kunikazu, Officer-in-charge at IOM Sierra Leone. “We need to protect them from profiteers who encourage them to migrate irregularly by spreading false promises of employment and taking advantage of their despair.”

“Whilst we will intensify safe migration messaging campaign, IOM will continue to develop programs to address the problem of youth unemployment through skills training and entrepreneurship especially for young people at different irregular migration prone areas in the country,” he adds.

In the coming weeks, returnees will receive reintegration assistance that will address their economic, social and psychosocial needs, with various types of support tailored to their needs and interests.

These returns were made possible with support from the European Union Emergency Trust Fund for Africa, under the EU-IOM Joint Initiative for Migrant Protection and Reintegration.