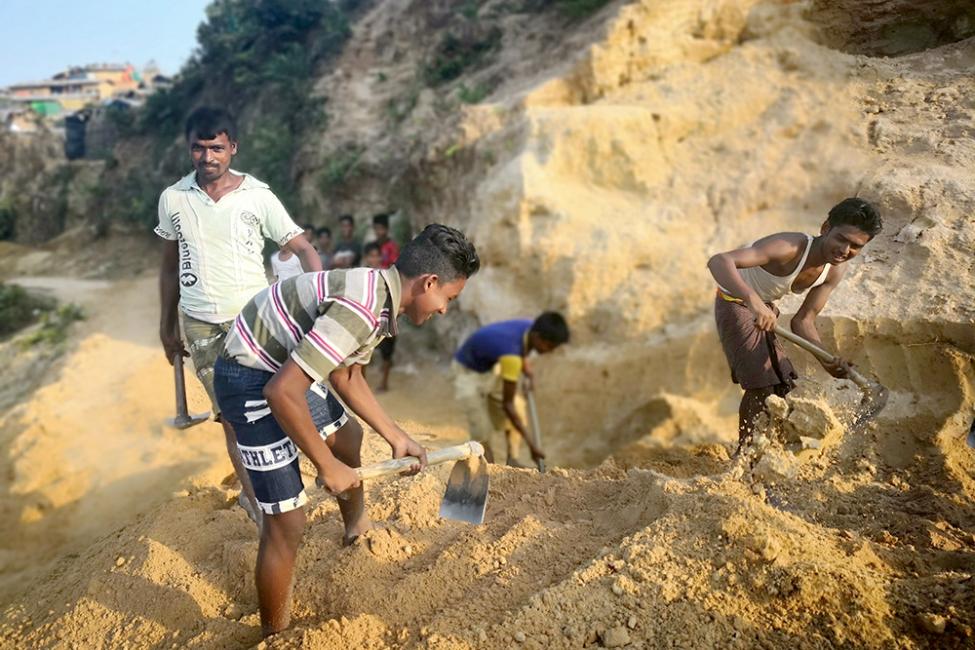 Local labourers work on a section of the canal in Hakimpara. Photo: IOM 2018. 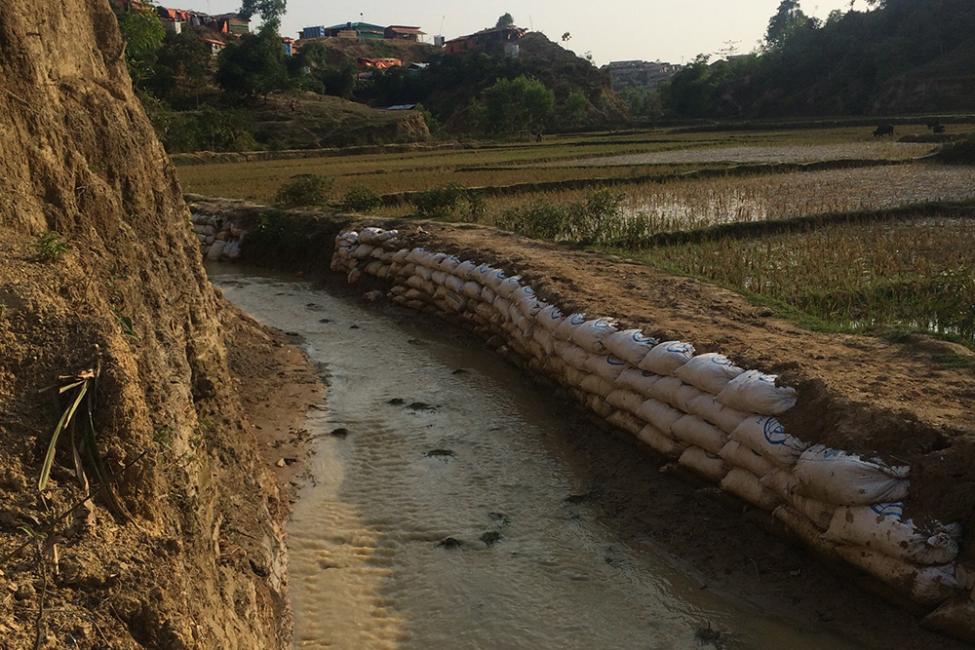 Sandbags shore up a section of the canal to improve drainage and irrigation. Photo: IOM 2018

Cox’s Bazar – A major canal dredging and renovation project is underway to protect local residents and refugees in southern Bangladesh from impending monsoon floods. The project is one of several initiated by IOM, the UN Migration Agency, to safeguard hundreds of thousands of people in Cox’s Bazar ahead of heavy monsoon rains and the cyclone season.

Over nine kilometres of abandoned canals are currently being dredged and renovated in Cox’s Bazar’s Ukhiya sub-district to prevent flooding and allow water runoff during heavy rains in the region, which is prone to some of the heaviest monsoon downpours in Bangladesh.

IOM has employed 50 labourers from the Ukhiya village of Hakimpara to carry out the work, which is part of a wider disaster preparedness programme supported by IOM.

The project will not only help safeguard lives and livelihoods in Hakimpara and neighbouring Jamtoli when the monsoon hits, reducing the risk of flooding. It will also provide an opportunity to boost local agriculture.

In previous years, flooding from the blocked canals damaged or destroyed up to 70 acres of rice paddy, according to local community leaders.  Once cleared, the canals will also provide irrigation during the dry season, they say.

“There was no water flow in the canal, as it hadn’t been maintained for years. This resulted in flooding in the surrounding communities during the monsoon as the rainwater coming down from the adjacent hills couldn’t flow through,” said Damon Elsworth, IOM’s Camp Coordination and Camp Management (CCCM) Operation Officer.

The hilly district of Cox’s Bazar was already prone to landslides and flooding even before the arrival of hundreds of thousands of Rohingya refugees fleeing violence in Myanmar. The refugees – desperate to find places to build shelters for their families – cleared vegetation from surrounding hills, resulting in soil erosion.

Almost 700,000 refugees have arrived in Cox’s Bazar since late August 2017, putting a major strain on local infrastructure. Most of the new arrivals live in desperately over-crowded conditions on the cleared slopes, which are now at ever greater risk of landslides and collapse during heavy rain.

The USD 20,000 canal clearing project, funded by the US (PRM), Canada and ECHO, is being carried out as part of the Site Maintenance Engineering Project (SMEP) – an interagency project involving IOM, WFP and UNHCR.

SMEP aims to tackle a range of monsoon risks. Prepositioned machinery in ten sites across the district will tackle clear roads and waterways if landslides and floods block key access routes. SMEP engineers, local workers and refugees are also preparing safer land to relocate refugees from the most dangerous parts of the camps.

Local residents working on the canal clearing project said they felt happy to be working to protect their community. “It feels good that we were consulted at every step of this dredging work. It feels like it is our property that we’re working for,” said Syed Kashem, 65, a local community leader overseeing the dredging work.

Cox’s Bazar has already experienced the first rains of the season. IOM and other agencies are working to support the Government of Bangladesh to respond to a wide range of potential emergency situations. Roads, pathways, bridges and drains have been built and land has been stabilized over the past months to help keep access routes open.

IOM has also established Para Development Committees (PDCs) – community groups, each comprised of six refugees and five members of the host community – in Teknaf sub-district, south of Ukhiya, where Rohingya refugees mostly live among the local community. To date IOM, working with the PDCs, has supported 24 quick-impact projects in the area. They include building bridges, access roads, steps, drains, and slope protection work that will enable communities to better weather the monsoon.

IOM is also stockpiling emergency aid including tarpaulins, bamboo, food, water and medical supplies at its new Hnilla, Teknaf logistics hub, funded by the Saudi aid agency KSrelief. This will ensure that the most urgent needs of both the refugee and host communities can be met, even if the weather makes access difficult.

Local community members in Cox’s Bazar have also been trained in first aid, search and rescue, and fire safety to tackle any disaster, including cyclones and heavy rains. Volunteer groups have been created and provided with tools to work alongside aid agencies in disaster preparedness and emergency response.