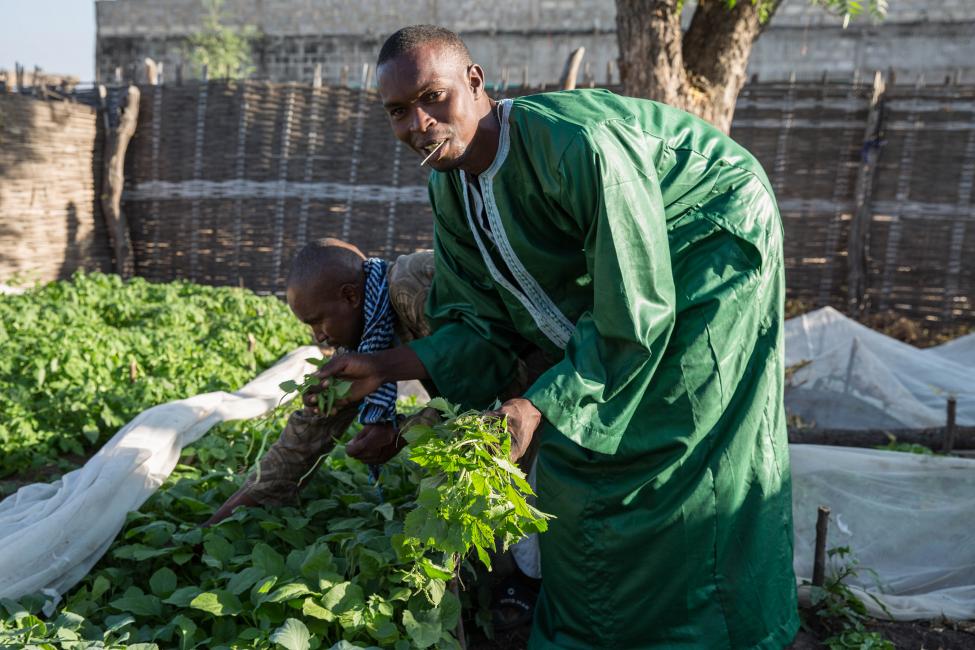 Ibrahima Sow, a Senegalese returnee, dressed up to show his work as a market gardener. IOM

Dakar – West Africa’s agricultural sector represents 35 per cent of the region’s Gross Domestic Product (GDP) and is one of the main sources of employment for millions of people- up to 80 per cent of the population in rural areas. However, climate change and its effects, such as the unpredictability and instability of rainfall patterns, have affected this sector, threatening the livelihood of communities and forcing many to migrate in the search for complementary income or better opportunities.

In addition, health­-related stressors such as COVID-19 have a high impact on the agricultural sector, by expositing the vulnerability of the food and distribution systems with the destabilization of supply chains and disruption of cross-border trade.

On World Environment Day (5/06), the International Organization for Migration (IOM) in West and Central Africa reminds governments and local authorities that if preserved and managed in a sustainable way, agricultural lands can provide job opportunities for youth and migrants and it can contribute to securing food production and strengthening biodiversity.

However, agriculture is today threatened by urbanization, with new buildings taking over the exploitable lands. In Rufisque, in the outskirts of Dakar, Senegal’s capital, communities and authorities join together to preserve this land that feeds them, that protects them from floods and that is also the green lung of their city. In this city, one household out of five lives thanks to agriculture and hundreds of working migrants come from neighbouring countries, Burkina Faso, Mali, and The Gambia.

In the tiny village of Medina Touat in rural Senegal’s southern Casamance region, soil degradation has forced many to abandon their agricultural activities. The increase in the phenomenon drives to a high unemployment rate and more and more departures of youth seeking for greener pasture in Europe, making Casamance, the Senegalese region with the highest migrant departure rate. Of the close to 4,000 migrants IOM has assisted with voluntary return to Senegal, 1,500 are from the Kolda Region, in Casamance.

To offer them a local and sustainable solution upon return, IOM launched a pilot project in the village of Medina Touat, Mainstreaming Environmental Dimensions into Reintegration Support to Reduce the Effects of Climate Change on Migration in West Africa. Funded by France, its objective is to mitigate the impact of climate change on migration and build resilience of populations to this phenomenon by reducing the pressure on nature. Thirty-four returnees are involved in this horticultural project with other community member, and eventually, over time, 10 hectares of land will be cultivated to feed the entire local population.

“More than ever, this highlights the need for resilient and local practices in agriculture, such as agroecology*. These practices can act as a safety net in terms of food security, communities’ living conditions, and overall resilience to climate change”, says Hind Aissaoui, IOM’s Regional Migration, Environment and Climate Change Specialist.

On the African continent, there are an estimated 18 million migrant workers, of which 80 per cent were attracted to sectors dependant on natural resources such as agriculture, mining, and fishing. In Senegal, almost 60 per cent of the seasonal workforce, young people mainly, came from neighbouring countries. Thus, agriculture plays a key role in job creation, especially among the youth and fosters inter-regional migration.