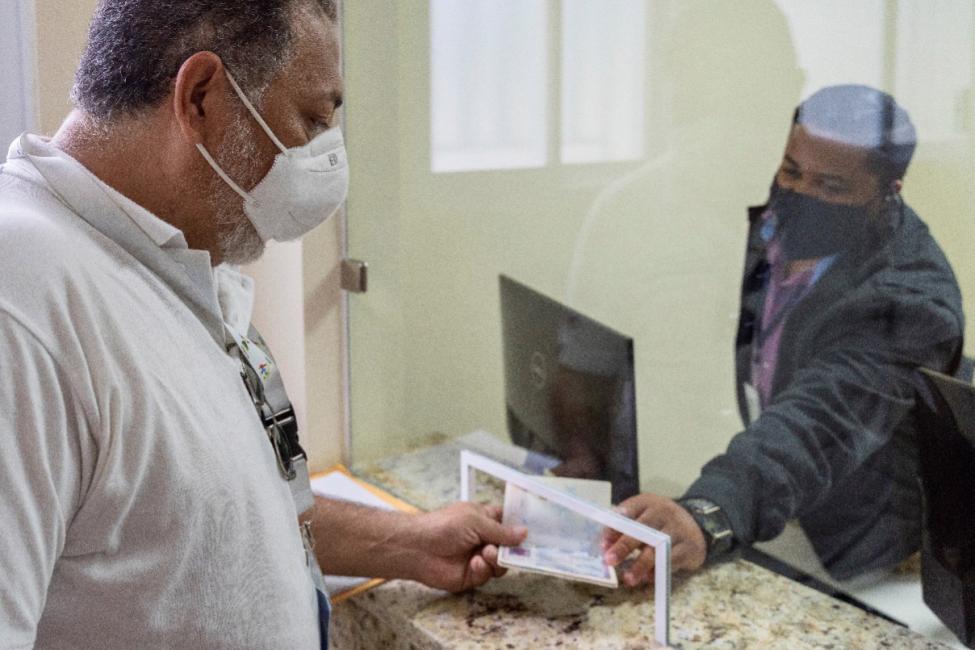 Santo Domingo – The first group of almost 100,000 Venezuelan migrants without legal status in the Dominican Republic have received visas allowing them to work, open bank accounts and join the social security system under the country’s Migration Normalization Plan.

Created by the Dominican government and launched with the support of the International Organization for Migration (IOM), the plan aims to regularize the Venezuelan population in three stages: application for extension of stay, visa, and residency. Since April, when the first phase began, 43,000  Venezuelans have registered to extend their stay and, on 1 July, the first group of 21 Venezuelans received their work visa.

"Now that I have my visa, I feel that for others like me a lot of opportunities are opening. We will be able to establish more safely and formally to offer a better future to our children," says Gabriela Rivero, who arrived in the country with her husband and daughter in 2018.  “Once we settled, we did not imagine how difficult it would be to get a job because the lack of documentation closed all doors.”

With IOM support, eight Venezuelan migrant organizations have created orientation hubs to assist the Venezuelan population who are applying to the plan. Of the 43,000  registered through the General Directorate of Migration (DGM) web page, around 9,000 have visited the hubs for help on the procedure. The promoters and coordinators of each hub – mostly Venezuelan migrants – have learned the process with the support and guidance of the DGM team and the Ministry of Foreign Affairs (MIREX). Besides being trained for orientation, they became the pilot group of the plan to receive their extensions and visas.

"The idea of this process is that we are the ones at the front of the hubs, a migrant helping a migrant, a Venezuelan helping a Venezuelan," says Iván Carrera, a lawyer from Caracas and legal adviser of FUNCOVERD (Fundación Colonia de Venezolanos en RD). Carrera works as a promoter at the orientation hub in El Sambil Santo Domingo, one of the locations with the most people requesting support for their application.

The support IOM provides to the orientation hubs is funded by the R4V Inter-Agency Coordination Platform for Refugees and Migrants from Venezuela. The R4V Platform seeks to integrate all relevant actors – governments, UN agencies, other international organizations, civil society, and the private sector – and to foster a comprehensive, foreseeable, and harmonized response to the situation of Venezuelan refugees and migrants at the regional level in Latin America and the Caribbean.