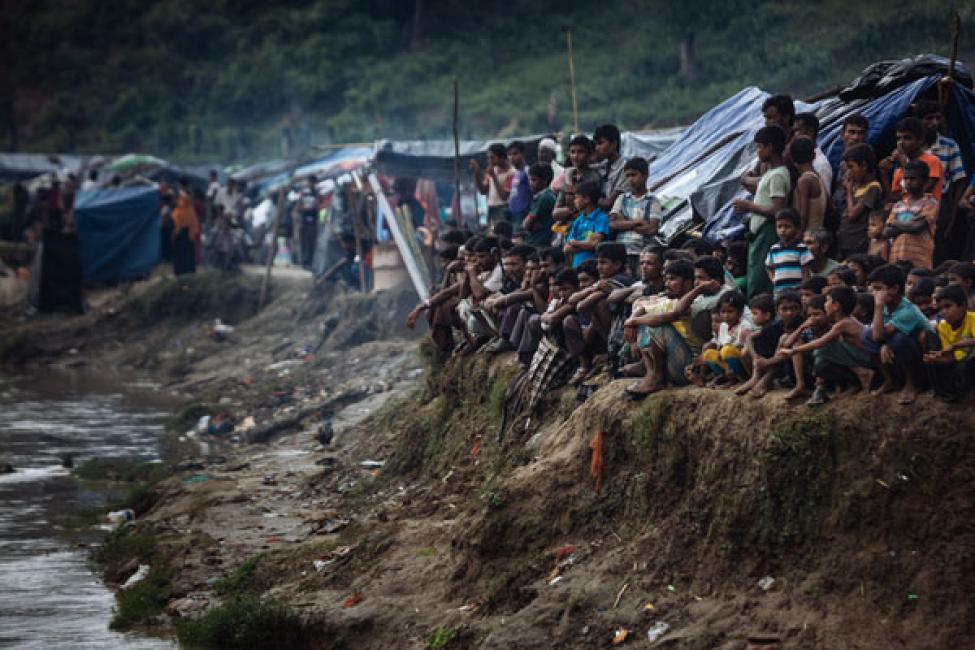 Tens of thousands of the new arrivals are still living in the open with little or no shelter, food or access to healthcare. Photo: Muse Mohammed / UN Migration Agency (IOM) 2017

Geneva -  The international donor community today announced pledges for more than US$344 million to urgently ramp up the delivery of critical humanitarian assistance to Rohingya refugees and host communities in Bangladesh.

Funding was also pledged for the humanitarian response inside Myanmar where violence, insecurity and growing humanitarian needs have sent nearly 600,000 Rohingya from the northern Rakhine state into Cox’s Bazar in Bangladesh since 25 August. This ongoing exodus is the fastest growing refugee crisis in the world.

“Humanitarian donors have today expressed their solidarity and compassion with the families and communities in need. These very generous pledges must now quickly translate into life-saving relief for the vulnerable refugees and support to host communities who have been stretched to the limit,” said Mark Lowcock, UN Under-Secretary-General for Humanitarian Affairs and Emergency Relief Coordinator.

35 pledges were made at the conference in Geneva which was co-organised by the UN Migration Agency (IOM), the UN Refugee Agency (UNHCR), the Office for the Coordination of Humanitarian Affairs (OCHA) and with Kuwait and the European Union as co-hosts.

"More than 800,000 stateless Rohingya refugees in Bangladesh aspire to a life that meets their immediate needs for food, medicine, water, and shelter. But beyond that, a life that has hope for the future where their identity is recognised, they are free from discrimination, and are able to return safely to their homes in Myanmar. As we come together in solidarity, I want to thank Bangladesh and its refugee hosting communities and the donors for supporting them,” said UN High Commissioner for Refugees, Filippo Grandi.

The Government of Bangladesh, local charities and volunteers, the UN and NGOs have been working around the clock in recent weeks to help the stateless refugees who depend on humanitarian assistance for food, water, shelter, health services and other essentials.

The UN and partners have launched a response plan for six months (Sept 2017 - Feb 2018) to meet the needs of a combined 1.2 million newly arrived and existing refugees and their Bangladeshi hosts. The appeal requests $434 million, and pledges made today will increase the funding level of this plan. A preliminary list of pledges announced today is available here

“Today’s pledges from the international community will help rebuild Rohingya refugees’ lives. Without these vital funds, humanitarians would not be able to continue providing protection and life-saving aid to one of the most vulnerable groups in the world. While we are thankful, I hope that the end of this conference does not mean the end of new funding commitments. We have not reached our target and each percentage point we are under means thousands without food, healthcare and shelter,” said William Lacy Swing, UN Migration Director General.

Conference participants stressed that the international community must help bring a peaceful solution to the plight of the Rohingya and ensure conditions that will allow for their eventual voluntary return in safety and dignity. The origins and the solutions to the crisis lie in Myanmar.

“The mere convening of this humanitarian conference is a message of hope sent to the Rohingya refugees and their host communities in the friendly Republic of Bangladesh, reaffirming that the international community stands by them and supports them in their humanitarian plight. The State of Kuwait is always willing to take any initiative that is likely to alleviate humanitarian crises that strike affected populations, and to support humanitarian programmes in line with all efforts exerted at an international scale to assist the Rohingya refugees,” said Deputy Minister of Foreign Affairs of the State of Kuwait, His Excellency Mr. Khaled Al-Jarallah.

“Today, we stand united for the right cause,” said EU Commissioner for Humanitarian Aid and Crisis Management, Christos Stylianides. “The cause of stateless people who have suffered for too long: the Rohingya. The Rohingya deserve nothing less than every other human being in the world. They deserve a future. We have a moral duty to give these people hope.”