Ethiopian Migrants' Decision-Making is Focus of New Research in Djibouti 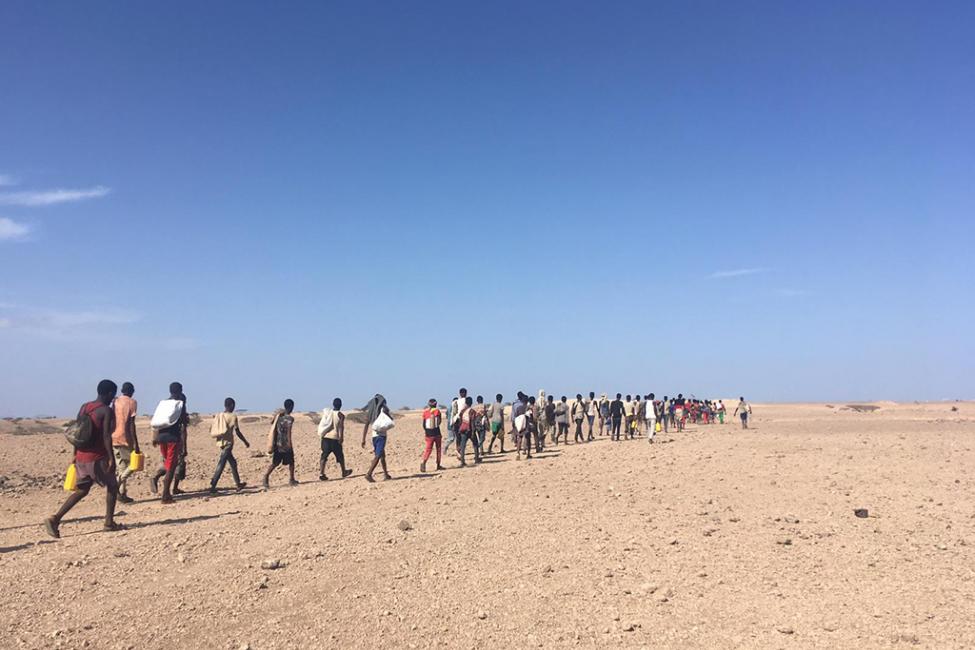 Nairobi – Sixteen-year-old Zinatou says learning difficulties forced her to drop out of school in Ethiopia. She soon set her sights on reaching Saudi Arabia through Obock, a coastal village in neighbouring Djibouti.

“I just followed a group of friends who decided to migrate,” she says. “My family was not aware of my travel.”

New research by the International Organization for Migration (IOM)’s Regional Data Hub in Nairobi, Kenya, is looking to cast the spotlight on these movements. It seeks to explore the nexus between migrant integration, decision-making and the expectations of the migration journey among young Ethiopian migrants venturing through this migratory route.

Between January and June 2019, IOM tracked 238,219 movements along this dangerous route. Ethiopian nationals were by far the majority (95% of those moving along the Eastern route), followed by Somalis (almost 5%), while other nationalities observed accounted for less than 0.1 per cent.

The research is being carried out with the support of the EU-IOM Joint Initiative for Migrant Protection and Reintegration in the Horn of Africa; a 43 million Euro programme funded by the European Union that is running until 2021.

The study’s main target population are 15- to 29-year-old Ethiopians migrating for the first time. To supplement the insights gleaned from this group, returning migrants and re-migrating migrants are also being interviewed.

The research is structured along two phases: quantitative and qualitative, to ensure a deeper understanding of the dynamics under investigation.

Another migrant, Fanah, shares a similar story as he also awaits his return to Ethiopia from Djibouti. “I migrated to have a better life. This is my third attempt,” the 23-year-old says. “The first time, I arrived in Saudi Arabia. I worked there for one year but was deported.”

The second time he was stranded in Yemen because of the war.  On his most recent attempt he was intercepted by coastguards off the coast of Djibouti.

Still, tens of migrants from land-locked Ethiopia regularly cross into Djibouti, a hot barren country that also serves as a major transit location for migrants on the eastern reaches of Africa. They are largely young adult males and about a fifth of them are below 18.

Their destination is mainly Obock, now associated with such migrants seeking to cross the Gulf of Eden to reach Yemen, Saudi Arabia and other Gulf countries, on the so-called Eastern route.

But not much else is known about them in great detail, except that their movements are motivated by a desire for a better life.

The information compiled in the quantitative phase of the research will serve to delineate a clearer picture of the decisions young Ethiopian migrants take when migrating, how they perceive their migration journeys and what expectations they hold.

It will also provide initial data on the challenges faced by this population during their migration. Once the quantitative data has been analyzed, semi-structured interviews and focus group discussions will be conducted to explore the emerging themes and gather more nuanced information on migrant motivations, expectations and hopes.

Ethiopia, the second most populous country in Africa after Nigeria, accounts for the largest numbers of migrant movements in the Horn of Africa.

The research is being conducted in close coordination with relevant national and local governmental authorities. IOM expects to share some preliminary results at the beginning of 2020, with a full launch of the research to stakeholders and the general public in booklet form and online around mid-2020.

According to Laura Nistri, the head of IOM’s regional data hub: “The Eastern migratory corridor is the most predominant in this region, mainly attracting tens of thousands of young Ethiopians seeking to improve their living conditions and economic status.”

She added: “At the same time, a significant number of them are routinely deported back to (the Ethiopian capital) Addis Ababa, risking their life while passing across war-torn Yemen, while most others are facing challenging working conditions in the Kingdom of Saudi Arabia.”

For more information on mobility trends across the East and Horn of Africa region, the Regional Data Hub has just released a new report: A Region on the Move – Mid-year Mobility Overview (January to June 2019).