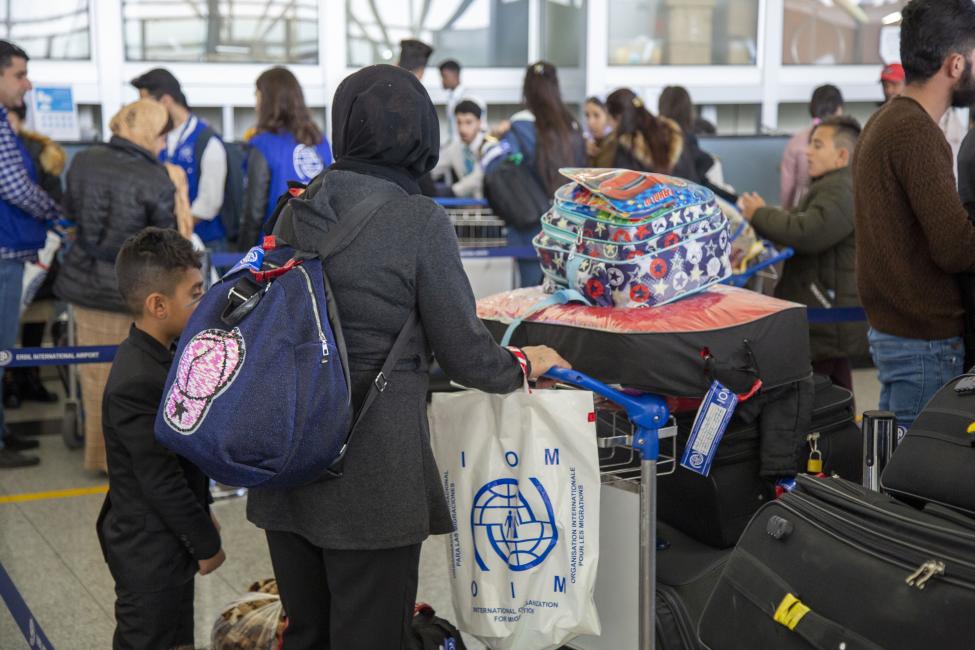 “These families have been through unimaginable trials and IOM Iraq has been proud to assist the French authorities with this important initiative,” said Giovanni Cassani, IOM Iraq’s Head of Programmes and Head of the Erbil Office.

“Many more families across Iraq remain in displacement. We will continue to support these populations, as well as host communities and returnees, during the recovery and stabilization process.”

Yazidis are found primarily in northern Iraq. In August 2014 the Islamic State of Iraq and the Levant (ISIL) swept through Sinjar, the stronghold of Iraq’s Yazidi community; hundreds of civilians are believed to have died as a consequence. One of the enduring images of that period was the plight of tens of thousands of Yazidis who were forced to flee to Mount Sinjar. Many have yet to return home.

The Humanitarian Admissions Programme (HAP) was launched at the request of the French President in October 2018, with the support of 2018 Nobel Peace Prize Laureate Nadia Murad, who has advocated for vulnerable Yazidi women worldwide.

“Less than a year after the first families were welcomed in France, the arrival of 27 Yazidi women and their children in Paris yesterday is a testament to the implementation of the commitment made by President Emmanuel Macron to Nadia Murad,” said Ambassador Eric Chevallier, Director of the French Crisis and Support Centre.

“In France these families receive protection, security and education, as well as medical and social support. Their integration into the host communities is facilitated by local non-governmental organizations, a process that is quite successful so far. Along with the emergency humanitarian assistance and stabilization efforts in Iraq that contribute to preserve the cultural diversity of the country, this programme is part of France’s action to help the victims of ethnic and religious persecution by ISIL in the Middle East.”

Prior to their departure for France, IOM assisted the families with transportation to Erbil, short-term accommodation, and medical check-ups. Along the journey from Duhok Governate to Erbil, the families stopped at Lalish, a Yazidi temple and pilgrimage site.

IOM teams also organized cultural orientation sessions, facilitated their travel to France and were on hand at Charles de Gaulle Airport when they arrived. French NGOs provide the families with housing and provisions for long-term social support to support their path to integration into their host communities and French society.

“Today’s safe arrival of the families is proof that the Humanitarian Admissions Programme is a flexible and responsive tool that offers a safe and legal avenue for people in need,” said Sara Abbas, head of IOM’s office in France. “The programme is designed to complement resettlement in solidarity with them and share responsibility with countries hosting the majority of forcibly displaced persons.”