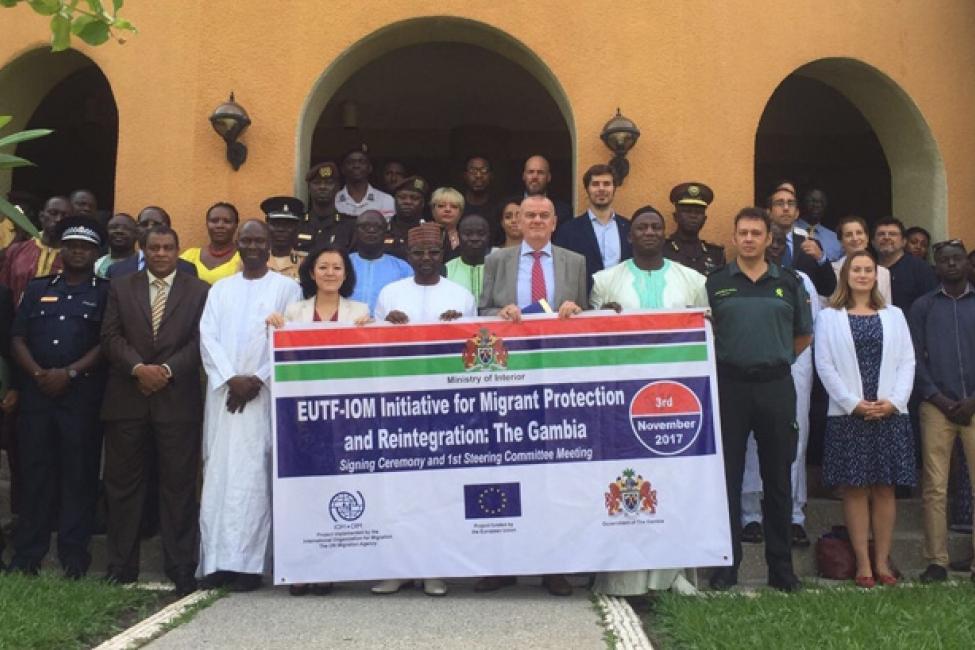 Banjul – IOM, the UN Migration Agency and the Government of The Gambia last week (03/11) officially launched the EU-IOM Joint Initiative for Migrant Protection and Reintegration: The Gambia at a ceremony in the capital Banjul, attended by the EU Ambassador to The Gambia, Attila Lajos and the country’s Minister of Interior, Mai Ahmed Fatty.  The launch was also attended by representatives from Government, the diplomatic community, civil society, the UN system and the media.

The three-year project is funded by the European Union Emergency Trust Fund for Africa (EUTF) for a total of EUR 3.9 million.

The initiative comes at a crucial time as a significant number of Gambians who have left the country become stranded on the migration routes to North Africa and Europe, with no means to continue their journeys. With little hope of reaching their intended destinations, many of them decide to return home but lack resources to do so.

The new project, part of a regional initiative addressing 14 countries in the Sahel and Lake Chad region as well as Libya, proposes to contribute to strengthening migration governance and to the sustainable reintegration of returning migrants in The Gambia, with the following three objectives:

To support 1,500 migrants returning to the Gambia to reintegrate into their communities of origin and to contribute to the strengthening of the Government of The Gambia’s capacity to provide sustainable reintegration support, including specialized assistance for vulnerable migrants;
To raise awareness of 250 communities and 2,500 potential migrants of safe migration options and alternatives to irregular migration;
To support national and local authorities and development partners in having access to data on migration factors, flows and trends to support evidence-based policy development and programmes.

IOM Chief of Mission in The Gambia, Fumiko Nagano, noted that the Joint initiative “aims to ensure that migrant rights are respected, that returning migrants are able to contribute positively to their communities, and that the migration process is safer and better managed. At the core, the Joint Initiative’s aim is to respond to migrant needs.”

The Joint Initiative’s inclusive approach will involve key stakeholders, such as migrants’ associations, community based organizations, and local communities to ensure the sustainability of reintegration and that Gambian migrants in the future will be opting to migrate via regular means as a matter of choice, rather than necessity.

IOM will be working very closely with the Government of The Gambia, particularly the Ministry of Interior, which has the mandate to lead on migration governance and management in the country.

In a separate but closely related event, IOM supported the government in holding the validation workshop in Banjul (02-03/11), on the country’s national migration policy, the first of its kind in The Gambia. This was part of IOM’s ongoing collaboration with the Ministry of Interior, financially supported by the EU-funded regional project, Support to Free Movement of Persons and Migration in West Africa (FMM West Africa). Once approved by the Cabinet, the policy will ensure that the Gambian Government has a comprehensive approach to migration management and governance.

“This policy is anchored on the ideals of African solidarity as well as shared values as informed by existing African Union frameworks including the AU Migration Policy Framework for Africa, the African Common Position on Migration and Development of 2006, the Common African Perspective for Valetta Summit on Migration of 2015, and Agenda 2063,” Minister Mai Fatty noted, as he urged EU and other stakeholders to act in partnership to address the root causes of irregular migration.

The FMM West Africa project, jointly funded by the European Union and the ECOWAS Commission, covers the 15 ECOWAS Member States and Mauritania on different thematic areas of migration, such as, trafficking in persons, border management, migration policy development and labour migration.