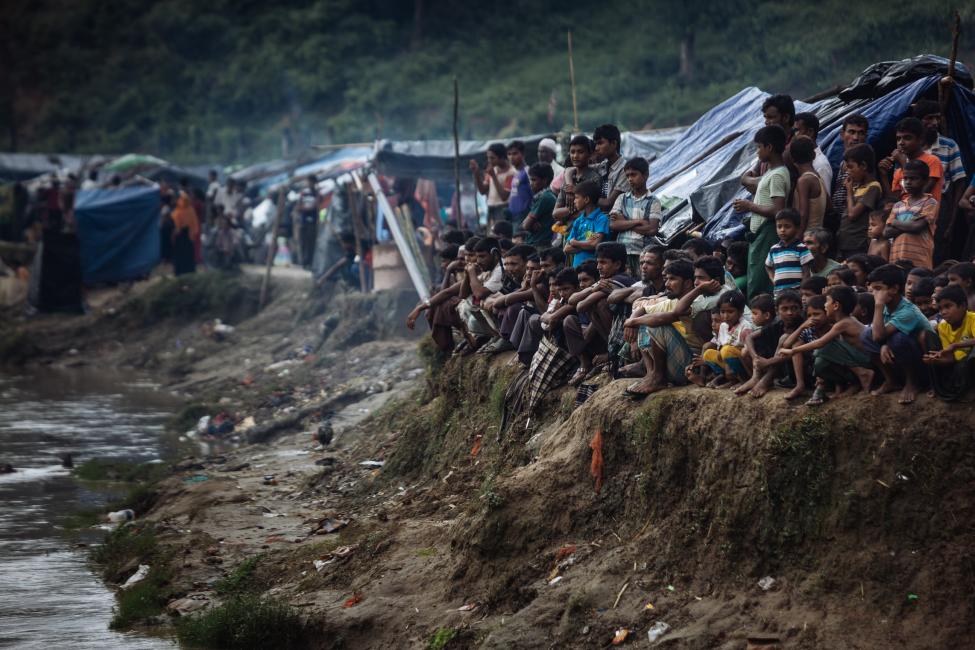 This week (9-11 October) some 15,000 Rohingya crossed into Bangladesh from Myanmar, bringing the total arrivals since late August to over 536,000. Photo: UN Migration Agency/Muse Mohammed 2017

This week (9-11 October) some 15,000 Rohingya crossed into Bangladesh from Myanmar, bringing the total arrivals since late August to over 536,000. Photo: UN Migration Agency/Muse Mohammed 2017

Cox’s Bazar –  An estimated 536,000 people have fled Myanmar and arrived in Cox’s Bazar, southern Bangladesh, over the past 47 days, according to the IOM-hosted Inter Sector Coordination Group (ISCG) of aid agencies. Numbers spiked again this week when some 15,000 Rohingya crossed into Bangladesh between 9-11 October.

“I came here five days ago. Five members of my family, including my pregnant wife are still on the other (Myanmar) side. I’ve talked to them by phone. They had to leave home and are now living in the open on a beach. They said that 8-9,000 people are on the beach waiting for an opportunity to cross,” said Mohammad Yakub, 50, speaking to IOM in Shahporir Dwip, a Bangladeshi island in the Naf river close to the border between the two countries.

The speed and scale of the influx has triggered a humanitarian emergency in Cox’s Bazar, where close to three quarters of a million refugees now depend on humanitarian assistance for shelter, food, water, sanitation and other life-saving needs. Prior to the August influx, Cox’s Bazar was already hosting over 200,000 previously displaced Rohingya, placing the district’s infrastructure and basic services under immense strain.

“The seriousness of the situation cannot be over-emphasized. These people are malnourished and there is insufficient access to clean water and sanitation in many of the spontaneous sites. They are highly vulnerable. They have fled conflict, experienced severe trauma and are now living in extremely difficult conditions,” said IOM Bangladesh Chief of Mission Sarat Dash.

Many of the new arrivals require immediate health assistance and agencies have appealed for USD 48 million to scale up primary health care in all the new settlements over the next six months.

“The risk of an outbreak of communicable disease is very high given the crowded living conditions and the lack of adequate clean water and sanitation. Maternal, newborn and child health care are also in desperately short supply given the very high numbers of pregnant or lactating women and children among the new arrivals,” said IOM Senior Regional Health Officer Patrick Duigan.

Since 25 August, ISCG agencies have provided over 210,000 people with healthcare assistance. Health partners are supporting the district health department with 12 medical teams in the new influx areas of Teknaf and Ukhia sub-districts. Nine health centers have also been established in remote, hard-to-reach areas of the new settlements.

The massive increase in the number of people in multiple sites is also overwhelming existing water, sanitation, and hygiene (WASH) facilities. WASH sector agencies believe that some 750,000 people out of the 1.2 million people targeted by the response plan will need WASH assistance in the next six months.

Since 25 August, over 333,000 people have been reached with WASH assistance, but agencies believe that almost same number of people are still in immediate need of WASH services. Collectively, the sector has installed 3,249 tube wells, but there are concerns about the quality of the wells and whether they are too shallow, given falling water tables.

Some 8,100 emergency latrines have also been built, but the fill rate currently exceeds the construction rate. This is being is compounded by the shortage of land and a lack of sewage management infrastructure. WASH agencies say that USD 74 million is needed to meet WASH needs through February 2018.

Against this backdrop, there is tremendous pressure on the existing settlements, with the population of multiple sites and settlements more than doubling since August 25. This has resulted in a huge need site management for an estimated 700,000 people. This will cost an estimated USD 65 million, according to ISCG site management agencies.