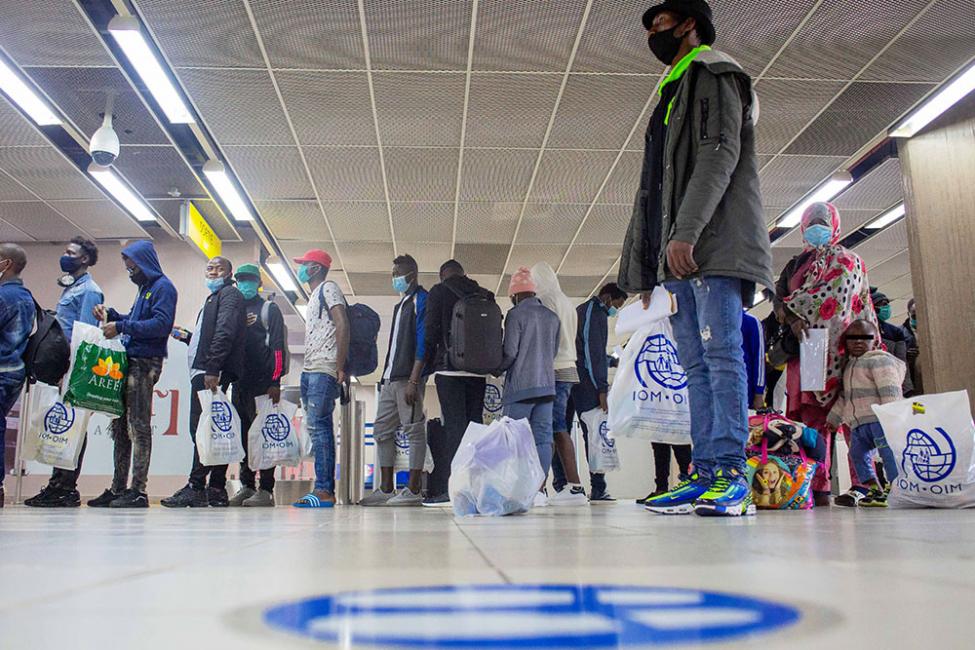 An IOM study on migrant debt reveals that the estimated amount of the indebtment of all returnees across the six countries surveyed may reach EUR 18 million Photo: IOM

Dakar – A study conducted by the International Organization for Migration (IOM) on the impact of indebtedness on returnee migrants in six West African countries reveals that 68 per cent are in debt, while over two-thirds characterize either the shame or burden of their indebtedness as a hindrance to their reintegration in their home communities.

As migration becomes increasingly hazardous and costly, many migrants take out loans and incur debt from relatives and friends to finance their journey.  On a personal level –social and psychological– many of those surveyed cited feelings of anxiety, failure, social isolation and fear of not being able to repay their obligations.

The survey, led by the IOM Regional Office in Dakar, was conducted in Burkina Faso, Côte d'Ivoire, Guinea, Mali, Senegal and The Gambia. A small fraction—about 8 per cent—admitted to being physically assaulted by their creditors. A returnee in Mali reported having lost the use of his left leg after suffering a gunshot wound administered by a lender.

IOM encourages the implementation of programmes to raise awareness among potential migrants, returnees, their families and communities on the economic and psychosocial impacts of migration-related debt on reintegration. IOM also recommends the development of protection programmes targeting returnees in debt.

To date, IOM has assisted 68,842 migrants to return to the six countries considered for this study under the IOM-EU Joint Initiative for Migrant Protection and Reintegration.

The study shows that an average of EUR 511 of indebtment per migrant. To better understand how significant this figure is, it can be compared with the average salary in the Sahel region. In Burkina Faso, for example, EUR 800 is considered an average annual salary.

Taken together, the estimated amount of the indebtment of all returnees across the six countries surveyed may reach EUR 15 million. This sum amounts the equivalent to some 10 per cent of all remittances sent back to Mali by migrants from France.

Parsing the math above, borrowing the equivalent of a year’s earnings in exchange for a chance to multiply the earnings of what can be expected at home may seem like a smart investment. But there’s a downside: the long-term costs of failure can be crippling.

According to Sokhna Sy, Regional Research Officer for IOM in West and Central Africa, returning home without any contribution for the family —but, on the contrary, in an even more precarious state than before departure— can constitute a failure for families.

“This has lasting consequences on the socio-economic reintegration of returnees,” she said. “The trust that creditors have placed on the migrant is compromised, and returnees face serious difficulties in repaying both the social and financial debts."

Moreover, borrowing money to migrate and then being unable to repay these loans can represent a palpable, physical danger for migrants and their families. The study reveals that one out of five returning migrants in debt reported having been threatened, abused or subjected to acts of violence to force them to repay their debts.

“The person without debt is far ahead of you as opposed to the one who is already indebted,” said Lamine*, a returnee in The Gambia. “He has more likelihood of succeeding with a reintegration package. Because if you are in debt you have double responsibilities: servicing the debt and trying to restart this life afresh.”

Conducted between February and April 2020 by the IOM Regional Office in Dakar, this study is part the "Security, Support and Solutions along the Central Mediterranean Route" programme funded by UK Aid/FCDO, the United Kingdom's foreign policy and development agency.

*this name has been changed to protect the identity of the interviewee.

To read the full study: