Internal Displacement in Yemen Exceeds 100,000 in 2020 with COVID-19 an Emerging New Cause 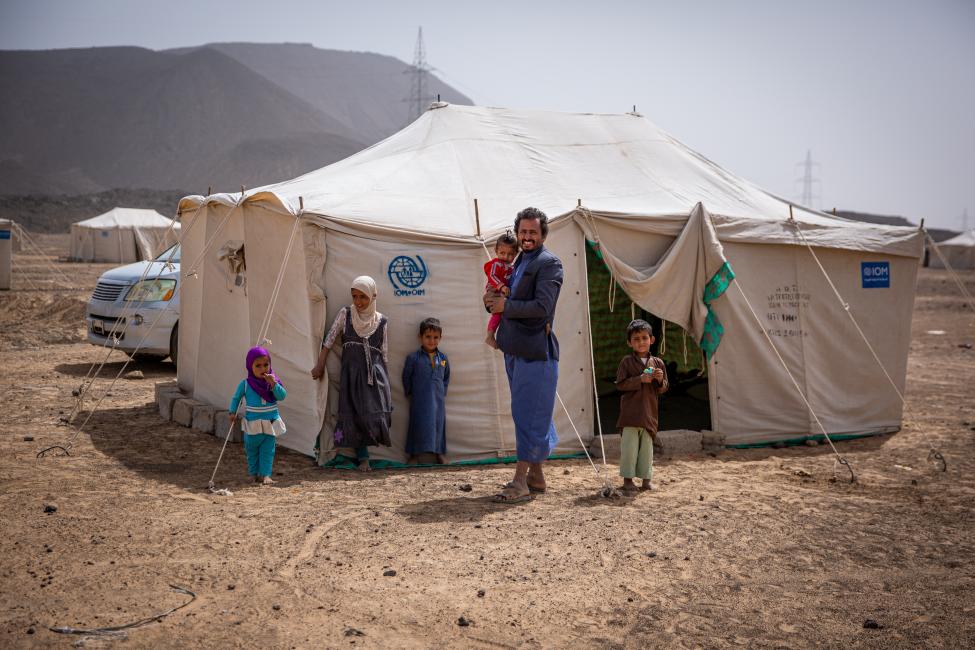 A father stands with his children outside their tent in a displacement site outside Marib city, the family was displaced in March to Marib from another displacement site which became dangerous as the conflict got closer to them. Photo: Olivia Headon

Aden – Nearly six years have passed, but the conflict in Yemen continues to rage on. So far in 2020, more than 100,000 people have been forced to flee – mostly due to fighting and insecurity. However, COVID-19 is beginning to emerge as a new cause of internal displacement across the country.

From 30 March to 18 July, the International Organization for Migration’s (IOM) Displacement Tracking Matrix (DTM) recorded over 10,000 people moving due to COVID-19, most typically related to fears of contracting the virus and the impact of the outbreak on services and the worsening economic crisis.

“The situation in Yemen is so dire, particularly in locations like Aden where hospitals are turning away suspected cases and news reports have tragically shown large numbers of graves being dug, that families are now leaving virus hotspots,” said IOM Yemen’s Chief of Mission, Christa Rottensteiner.

“Displaced communities in Yemen have been the ones worst affected by the conflict. Now we are seeing that the COVID-19 outbreak is having a huge negative impact on them,” she added.

The official number of COVID-19 cases in Yemen remains low. However, given limited testing capacity and concerns among the local population about seeking treatment, the humanitarian community is working under the assumption that the actual numbers are much higher.

Reports of increasing illness and death from communities across the country are confirming this assumption. Displaced people have now begun to list the outbreak as the reason for their displacement.

The majority of people are moving from Aden, as well as to a lesser extent from Lahj and other governorates, to other areas in Lahj less affected by the outbreak while others are going to districts in Al Dhale and Abyan, despite active fighting ongoing in other parts of that governorate.

Due to access constraints, IOM DTM currently only collects data on displacement in part of the country— districts in 12 governorates out of 22. Therefore, the number of displacements in 2020 is likely to be much higher than what has been recorded.

“Corona has made our situation worse — everyone is tired,” said Salam, a displaced woman originally from Al Hudaydah and currently sheltering in a displacement site in Aden.

“Some people have had to sell their mattresses, blankets and children’s clothes. We used to work as maids but now when we go knocking on doors to offer our services, they demand that we leave because they are afraid that we will infect them. Since they won’t give me work in their homes, I have to beg on the street,” added Salam.

Many of those displaced as a result of the outbreak were already living in displacement and are moving for the second, third or fourth time.

“People are living in constant fear of developing coronavirus symptoms, and they don’t have anything to protect themselves,” said Rawdah, who was displaced from one district to another in Taizz and is now living in a displacement site.

The water and sanitation situation in many of the displacement sites in Yemen is extremely worrying, and displaced Yemenis are finding it difficult to access health care. This is particularly the case in Marib where the majority of people have been displaced to this year—more than 66,000 people.

Due to the sheer number of displaced people sheltering in and around Marib city, informal displacement sites are overcrowded and lack access to essential services.

Across Yemen, restrictions on entry to displacement sites due to infection prevention and control measures for both humanitarians and displaced residents themselves are hampering IOM’s response. Limited access to medical facilities and employment opportunities are key concerns for displaced communities.

In addition to collecting information on the movement and needs of internally displaced people in Yemen, IOM provides them with humanitarian assistance and protection. The Organization ensures that displaced communities across Yemen have access to health care, clean water, safe sanitation, shelter materials and household items. In 2019, IOM reached over five million people, a vast majority of whom were displaced.

“Displaced people need more support than ever, but funding is falling short this year. Without urgent funds, IOM will not reach over 2.5 million displaced people and migrants this year,” concluded Rottensteiner.

Watch IOM Reporter: COVID-19, New Cause of Displacement in Yemen