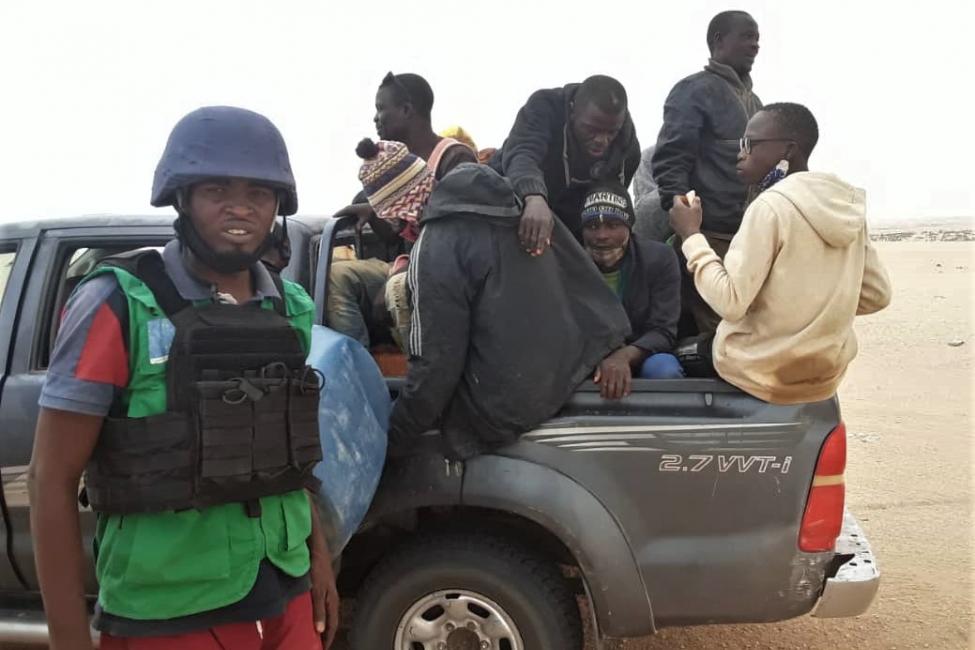 Niamey – IOM’s Search and Rescue (SAR) team operating in Niger’s northern Agadez region on 3 September rescued 83 migrants in distress. IOM worked in collaboration with the General Directorate for Civil Protection (DGPC) in Niger, with support from the European Union.

The rescue took place in a remote stretch of the searing Sahara Desert, where temperatures frequently surpass 38° Celsius (100° Fahrenheit) and where hundreds of migrants are believed to have perished from dehydration, vehicle accidents and assault in recent years.

The migrants IOM rescued had been bound for Libya. They included 42 males – mostly Nigerian, but also several from Togo, Mali and Ghana – as well as 41 Nigerian females, including twin 4-year-old girls.

A week prior, in the transit town of Agadez, the group boarded four pickup trucks taking alternative routes towards Libya to avoid detection by law enforcement and security forces. Witnesses from among those rescued told IOM staff that last Tuesday (1/09), their smugglers made a stopover some 230 km north of Dirkou, another Sahara crossroad.

It is a common occurrence for vehicles carrying migrants to break down in the desert and for smugglers to get lost or abandon their passengers fearing checkpoints or military patrols.

After leaving Dirkou, witnesses explained the smugglers spotted military vehicles on the road up ahead and feared the authorities had spotted them and their migrant cargo. Rather than risk arrest, the migrants explained, their four drivers abandoned their passengers, after first taking all their belongings.

“We were stranded for three days without food or water. We searched for water, but all we found were dirty wells used by livestock. So, we were not able to drink at all,” recalled one witness, 25-year-old “Dennis”, from Nigeria. “People were collapsing left and right. I started crying when I saw the cars approaching, hoping help was coming.”

When the rescue team found the group, many were dehydrated, injured and in need of immediate medical assistance.

After receiving water, food and medical care, the migrants were transported to a COVID-19 confinement site in Dirkou where they will undergo a 14-day quarantine period. Seven migrants are currently being medically assisted at the health centre in Dirkou.

After their two-week quarantine ends, migrants who wish to return to their country of origin can opt to move to IOM’s transit centre in Dirkou and join the Assisted Voluntary Return and Reintegration (AVRR) programme, implemented under the EU-IOM Joint Initiative for Migrant Protection and Reintegration.

IOM and the DGPC have been conducting joint SAR missions in Dirkou since 2016. SAR operations around the cities of Agadez and Dirkou are crucial given the dangerous desert conditions.  At regular intervals, teams are dispatched on migration routes to search for migrants in distress.

Given the vastness of the Agadez region which spans 703,000 km² – desert, for the most part – an area larger than Afghanistan, finding and reaching migrants in distress can be a daunting task. On these routes, migrants and SAR teams are exposed to many challenges, such as scorching temperatures, poor road conditions and a volatile security context.

“The migrants rescued last Thursday were found in an isolated place far from any form of life,” said Boubacar Djaram, Mayor of Dirkou. “Without this collaboration between IOM and Civil Protection, these people would have perished without a trace.”

IOM deploys community mobilizers in strategic locations along the main migration crossroads in Niger to sensitize migrants about irregular migration. They work on the frontlines during SAR operations, assisting migrants with food, water, first aid and information about quarantine, transit centres and AVRR.

“Participating in SAR operations is one of our most important tasks,” said Tijani Boukary, IOM community mobilizer in Dirkou. “Our commitment to migrants goes far beyond disseminating information; we get involved wherever we are needed, even if that means working in insecure contexts.”

“It is impossible to know how many migrants have died attempting to cross the Sahara. Many bodies are buried during sandstorms, never to be found again,” said Barbara Rijks, IOM’s Chief of Mission in Niger. “With support from our partners, IOM and the Government of Niger are making extraordinary efforts to ensure that these life-saving operations can reach migrants in distress in a timely manner.”