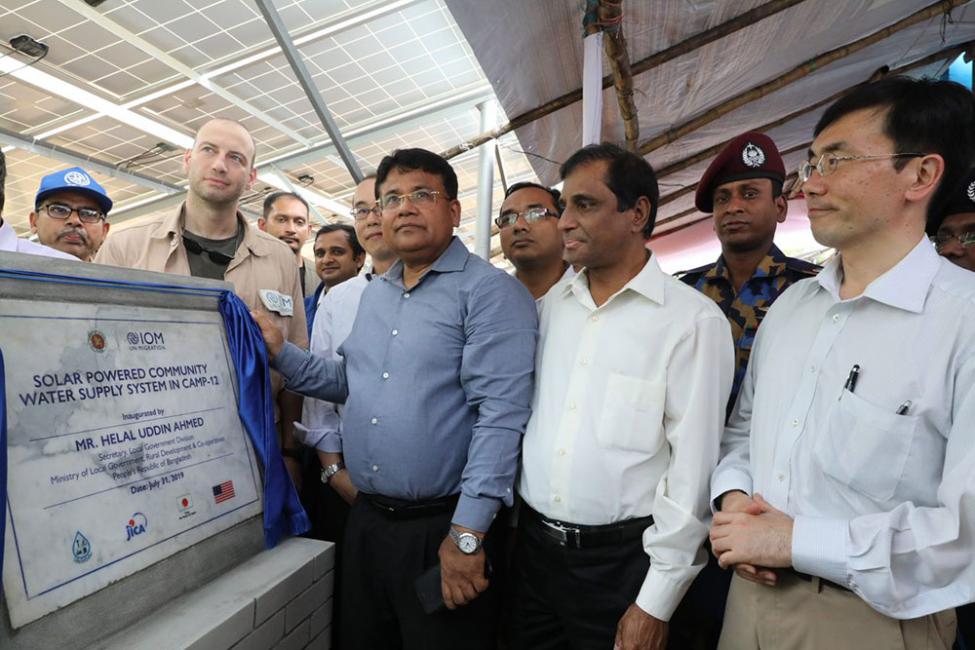 Cox’s Bazar – One of the world’s largest humanitarian solar water systems was officially inaugurated today (31/07) by the International Organization for Migration (IOM) and partner the Japan International Development Agency (JICA). The network will provide safe, clean water to approximately 30,000 people living in the Kutupalong Mega-Camp from a deep underground well.

Japan Embassy’s Minister Takeshi Ito said: “I would like to commend the people of Bangladesh who have accepted more than 700,000 displaced people... We are now providing safe water for 30,000 people and it will contribute to the realization of Sustainable Development Goal Number Six: ‘Clean Water and Sanitation for all.’”

The water comes from a deep borehole carefully tested to measure sustainability over the long term. The system takes full advantage of the area’s tremendous solar energy potential and is powered by almost 200 panels, providing enough electricity to pump over 580,000 litres of water daily. The water storage reservoir is made up of six large 95,000 litre tanks, capable of supplying the population for over 24 hours in emergencies.

Importantly, the system includes a disinfection plant, which will chlorinate the water to prevent household-level contamination. Almost 10 kilometres of pipeline was installed for this network, supplying 358 taps through 87 tap stands.

IOM Bangladesh’s Chief of Mission Giorgi Gigauri said: “This system stands as an international example; not just for its capacity; but because of the impressive collaboration between partners, countries and people. In addition to addressing the immediate needs of the local community, we look forward to working with Rohingya volunteers and host community technicians to localize this system and ensure its sustainability well into the future.”