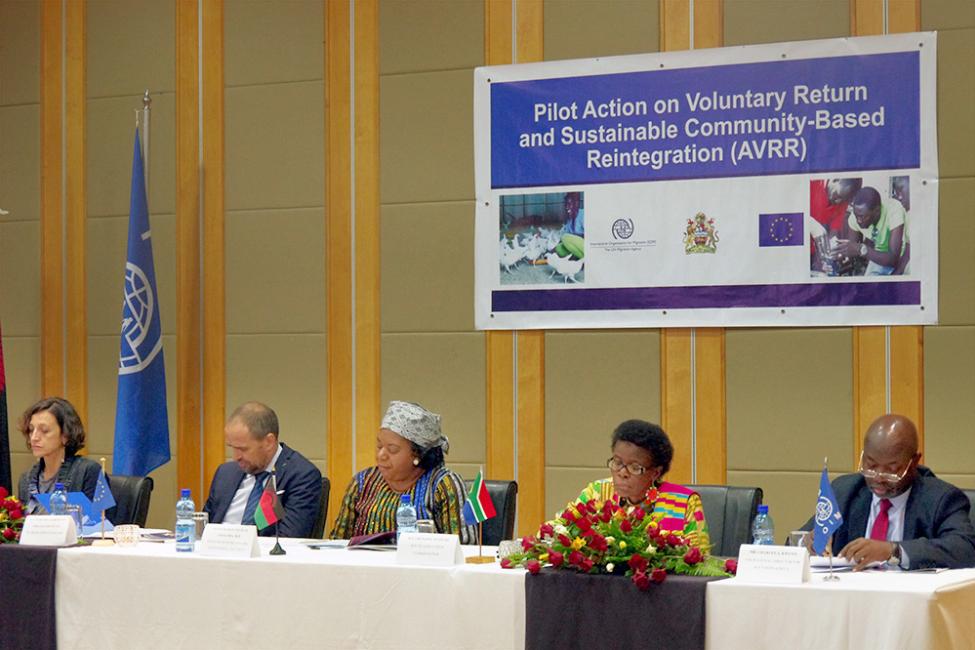 Malawi – IOM, the UN Migration Agency, in partnership with the European Delegation to Malawi and the Government of Malawi, this week officially launched a three-year Pilot Action on Voluntary Return and Sustainable Community-Based Reintegration. This action is fully funded by the European Union at EUR 15 million and will be implemented in four countries: Malawi, Mozambique, South Africa and Zambia.

The Pilot Action focuses on addressing the challenges of irregular migration flows in the Southern Africa region, by enhancing the national structures and capacities of governments and stakeholders to facilitate dignified voluntary returns and sustainable reintegration processes. It will also enhance the sustainability of returnees’ economic, social and psychosocial reintegration through tailored individual and community level assistance.

The reference to migration in the Sustainable Development Goals (SDGs) is made under SDG 10 – Reduce Global Inequalities, Target 10.7, which strives to “facilitate orderly, safe, regular and responsible migration and mobility of people, including through implementation of planned and well-managed migration policies”. Hence, the pilot action presents an opportunity for Malawi to devise durable and tailored interventions to managing migration.

“There are many different motivations behind irregular migration,” said Marchel Gerrmann, Ambassador of the European Union to Malawi, in his statement during the launch. “But often it ends in deep disappointment. The journey is often far more dangerous than expected, often at the mercy of criminal networks who put profit before human life. Those who fail the test of asylum face the prospect of return. Those who live a clandestine life in foreign countries have a precarious existence and can easily fall prey to exploitation. It is in the interest of all to address the root causes which drive people to seek life elsewhere.”

Gerrmann added: “We have come to the realization that doing business as usual will only address part of the problem. Providing more opportunities for the youth in the countries of origin and offering enhanced support to those who return to their communities and those who have not taken the decision to migrate need to be at the core of a sustainable long-term migration management approach.”

The South Africa High Commissioner, H.E. Thenjiwe Mtintso, pointed out that “The South Africa White Paper on International Migration recognises that international migration is difficult to stop and also that it is beneficial, if it is managed in a way that is efficient, secure and respectful of human rights, safety and dignity of people. It recognises South Africa’s responsibility and commitments to creating a Better, Prosperous Africa at peace with itself. It does and has to continue to embrace other Africans within its own legal and economic conditions.”

In her recommendation, she said, “Malawi and South Africa should embark on an aggressive civic education in both countries, especially in Malawi, to educate citizens on the procedures for immigration and advantages of remaining home, and also create the necessary environment, especially economically.”

“As Malawi is in the process of developing its National Migration Policy, this pilot action presents an opportunity for Malawi to ensure that Assisted Voluntary Return and Reintegration processes are spelt out as it presents a better option in the return of Malawi nationals from other countries in a safe and dignified manner,” UN Resident Coordinator Maria Jose Torres said during the launch.

According to Charles A. Kwenin, IOM Regional Director for Southern Africa, “Dialogue and cooperation are key areas that will yield better performance on voluntary return and reintegration as countries of origin, transit and destination are affected in different ways by return issues and accordingly have different priorities and perspectives. It is imperative that regional and continental level discourses address these issues. Such an approach should be encouraged across different sectors and between relevant line ministries with different mandates.”

He further added: “The issue of sustainability over time is a crucial one as the needs and concerns of the communities of return must also be borne in mind. In addition, where the structural factors that compelled people to emigrate in the first place are not addressed, returnees may be tempted to seek the services of smugglers once more. The forging of links between effective reintegration schemes and local development initiatives in communities of return will, therefore, be encouraged.”

The guest of honour, Minister of Home Affairs and Internal Security Cecelia Chazama M.P. said: “Irregular migration along the Southern Africa Route is increasingly becoming dangerous for migrants. As such, improvements in migrant care, protection and migration management capacity in the region is needed to better respond to these complex migratory flows. As government, we are appreciative that IOM, in collaboration with stakeholders, has helped make migration management a global phenomenon.”

The launch was attended by the representatives of the government, the European Delegation to Malawi, Ambassadors and High Commissioners accredited to Malawi, development partners, UN agencies, academia, media, religious bodies, private sector, CSOs, and other key stakeholders.