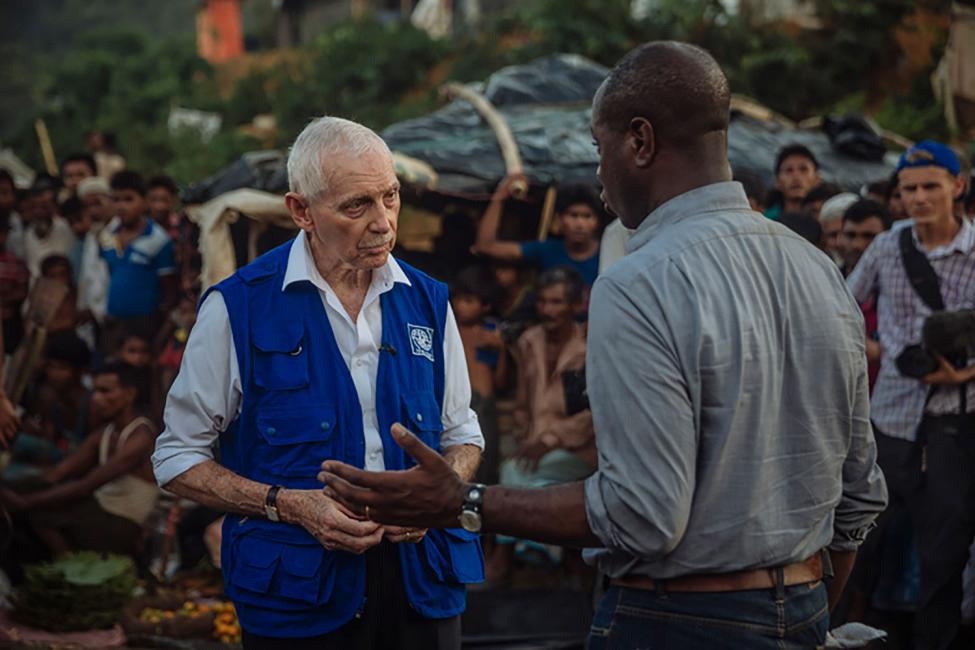 A tireless advocate on behalf of migrants and refugees, DG Swing was interviewed by the BBC in Cox's Bazar, Bangladesh, in Oct 2017, as hundreds of thousands of Rohingya were fleeing across the border from Myanmar. Photo: IOM/ Muse Mohammed

Geneva – William Lacy Swing, former Director General of the International Organization for Migration (IOM) and longtime US diplomat, has died in Kuala Lumpur, Malaysia. He was 86 years old.

"It is with a heavy heart that I learned of my predecessor's passing today," IOM Director General António Vitorino said on Saturday. "His was a life of service to his country and humanity, and a source of inspiration to us all."

Swing was born in Lexington, North Carolina in the United States in 1934. He entered the Foreign Service after graduating from Yale University (1956) and completing postgraduate studies in Germany (1960).

Over four decades, his diplomatic career included six US Ambassadorial postings, in the Republic of the Congo, Liberia, South Africa, Nigeria, Haiti and the Democratic Republic of the Congo before retiring from the US Foreign Service in 2001 and embarking on a second career with the United Nations.

Swing often told the story of arriving in Port Elizabeth, South Africa, as a junior foreign service officer in 1963 as Nelson Mandela was being transferred to Robben Prison. He returned 26 years later as Ambassador to witness Mandela's release and subsequent presidency over post-Apartheid South Africa and cited that transformation as an example of the seismic changes that can occur over the course of a single lifetime.

Prior to joining IOM Swing served as United Nations Special Representative of the United Nations Secretary-General in Western Sahara (2001-2003) and the DRC (2003-2008). He was elected Director General of IOM in 2008, steering the Organization for the next decade through its greatest period of expansion since the organization’s foundation in 1951.

Under Mr. Swing’s stewardship, IOM grew into an agency with an annual operating budget of an estimated USD1.5 billion and more than 10,000 staff working in over 150 countries worldwide. IOM currently has 174 Member States.

Swing felt strongly that IOM's future lay in formalizing the well-established working relationship between the Organization and the United Nations system. In September 2016, then-DG Swing and Secretary-General Ban-Ki Moon signed the agreement that established IOM – UN Migration – as a related organization of the UN.

As UN Migration, IOM became the point of reference in the global debate on the social, economic and political implications of migration in the 21st century.

Shortly before to his retirement in 2018, Swing heralded the completion of the Global Compact for Safe, Orderly and Regular Migration as an important milestone to improve international cooperation on migration.

“This is not the end of the undertaking but the beginning of a new historic effort to shape the global agenda on migration for decades to come,” he said at the time.

IOM staff around the world are deeply saddened by the news of Mr. Swing’s passing and extend their deepest condolences to his family.

He has a son, Brian, and a daughter, Gabrielle, and has lived in Kuala Lumpur, Malaysia with his wife Yuen Cheong since his retirement.