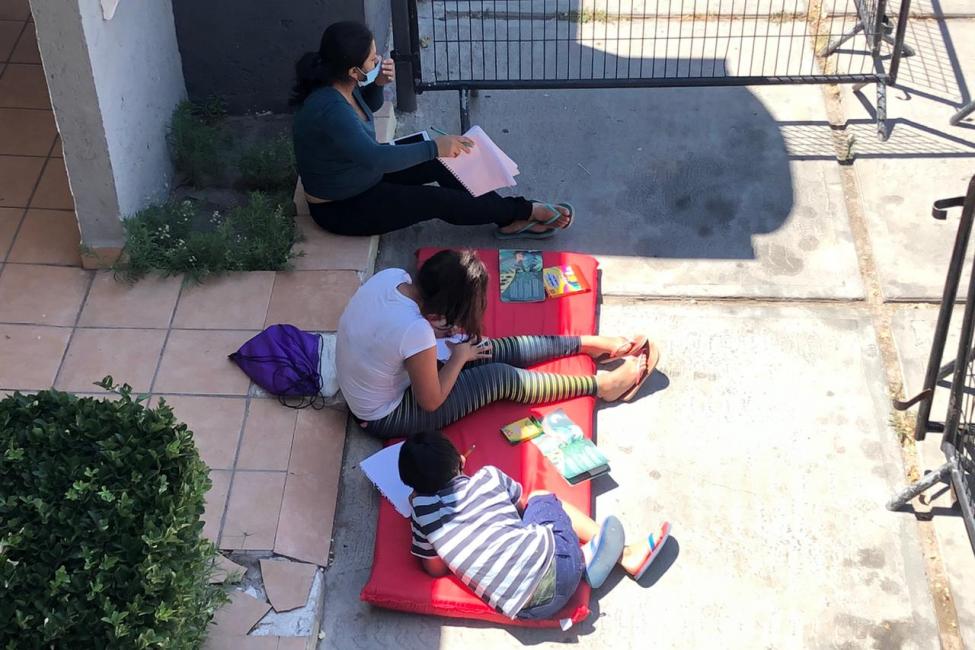 Migrant families find in the filter hotel in Ciudad Juárez a safe space to stay in a clean room and all together while they decide what they will do after complying with the quarantine. Photo: Alex Rigol / IOM Mexico

Ciudad Juárez – In this Mexican city on the border with the United States, many migrant shelters have closed their doors in order to prevent the spread of COVID-19. For this reason, recently arrived migrants to the city, or those who can no longer afford to pay for lodging, wonder if they would have somewhere to go during the quarantine ordered by authorities.

Now they do. More than 50 migrants have benefited from a “Filter Hotel” here in the northern Mexico state of Chihuahua. “Guests” have stayed up to two weeks under medical supervision before accessing one of the city’s 17 shelters, which otherwise are closed to new admissions.

The “Filter Hotel” response is an initiative supported by approximately 40 civil society organizations, academics, and businesses, as well as government—local, state, and municipal—the World Organization for Peace (WOFP) and the International Organization for Migration (IOM), which rents the facilities.

“For me it’s a blessing that they haven’t abandoned me, that they didn’t turn their backs on me,” explained a 32 year-old Central American woman, who is in the final stages of pregnancy, and who arrived just days ago with her three children aged 3 to 9 years old.

The hotel is located on the premises of the Hotel Flamingo and has a maximum capacity of 108 people. It opened on 9 May with the goal of supporting recently arrived migrants and migrants who have lost income due to COVID-19, and who have nowhere else to self-isolate.

Rosa Mani, a representative of the WOFP and coordinator of the “Filter Hotel”, explained that every individual who arrives is treated with dignity. Moreover, each person goes through a sanitization process, registers with medical personnel, and can stay in the hotel’s facilities for up to two weeks without cost, all the while receiving psychosocial support, language classes, reading workshops, and other activities.

The space is divided into areas for men, women, and families; there is an area for people with special needs (pregnant women, people who do not speak Spanish, older adults, or people in need of specialized medical attention), and an isolation zone for people with symptoms of COVID-19.

One family from Michoacán, in Western Mexico, explained that they are thankful to have found a clean place to stay in Ciudad Juárez where they can be together while deciding their next step.  They hope to join a relative in the United States.

In the “Filter Hotel” their children are receiving classes from a teacher who visits regularly.

For decades, Ciudad Juárez has been an important point of migration towards the United States. In the city, IOM staff find migrants from Honduras, Guatemala, El Salvador, Brazil, Cuba, Ecuador and Peru, as well as from African and Asian countries.

It is estimated that between January and May 2020 at least 11,000 migrants transited through Ciudad Juárez. Of these, approximately 8,000 were deported from the United States in the same time period. Of them, about one thousand are Mexicans who have been displaced by violence, and about 2,000 of them are returnees from the Migrant Protection Protocols (MMP) program for asylum seekers awaiting immigration court appearances.

Of these migrants, IOM estimates that more than 1,200 are living in shelters, and between 4,000 and 6,000 people are dispersed through the city in lodgings paid out of pocket or sleeping rough.