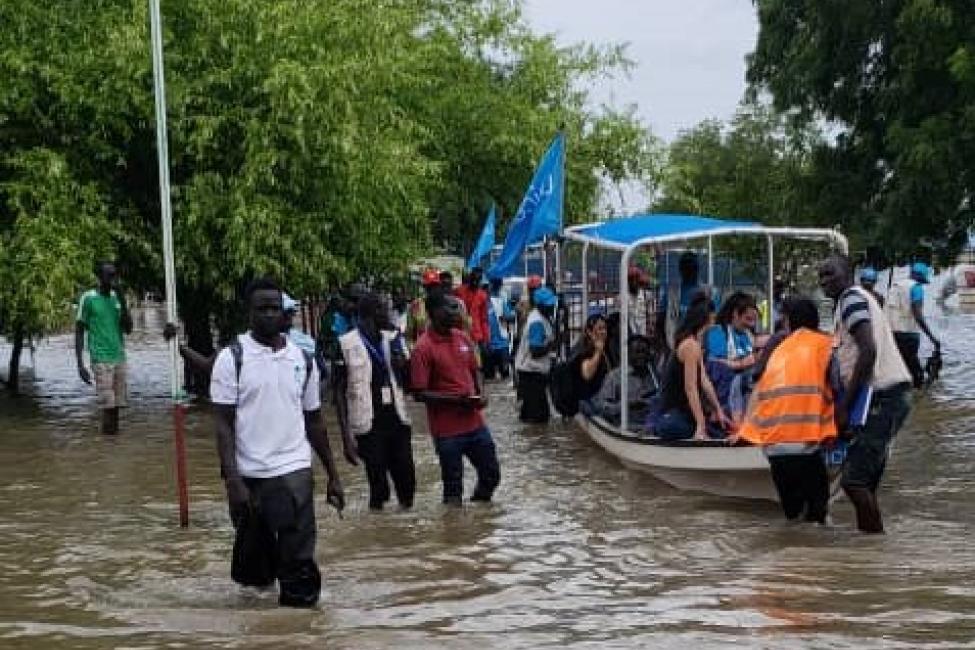 Juba – The International Organization for Migration (IOM) has scaled up efforts to meet the needs of internally displaced people and host communities in response to devastating floods that have affected over 900,000 people in South Sudan.

“It was distressing to witness the level of destruction and suffering that the floods have caused,” IOM Chief of Mission in South Sudan, Jean-Philippe Chauzy said following a recent visit to flooded areas in Jonglei region.

“I spoke to one elderly displaced resident who had sought refuge in an overcrowded church standing on a small patch of dry ground in the middle of a quagmire. She told me she cannot remember floods of this magnitude.”

More than three months of unprecedented rainfall has submerged entire communities resulting in the temporary mass displacement of people and the disruption of basic services. Thousands of homes and shelters have been destroyed, crops that sustain local livelihoods wiped out, and there are fears the contaminated water will spark an outbreak of disease.

Prior to the flooding, nearly two-thirds of the affected areas reported critical levels of malnutrition primarily affecting children and pregnant women.

On 26 October, the Government of South Sudan declared a state of emergency in 32 counties in Jonglei, Upper Nile, Warrap, Eastern Equatoria and Northern Bahr el Ghazal regions, a development that was commended by humanitarian partners in the country.

Through an integrated and coordinated response to the ongoing crisis, IOM in support of the government, has:

Despite concerted efforts by IOM and other humanitarian partners, assistance has not reached some communities due to impassable roads and flooded airstrips leading to increased unmet needs for vulnerable communities.

“Access constraints to some of the affected areas are putting pressure on the flood response,” said Chauzy.

“And while IOM continues to borrow against relief items meant for the dry season to respond to this emergency, there is need to replenish supplies that will be needed this coming year, especially given the anticipated long-term humanitarian needs as a result of the flooding.”

IOM’s emergency response to flood-affected populations in South Sudan and the Abyei Administration Area is supported by DFID, ECHO, OFDA and USAID.