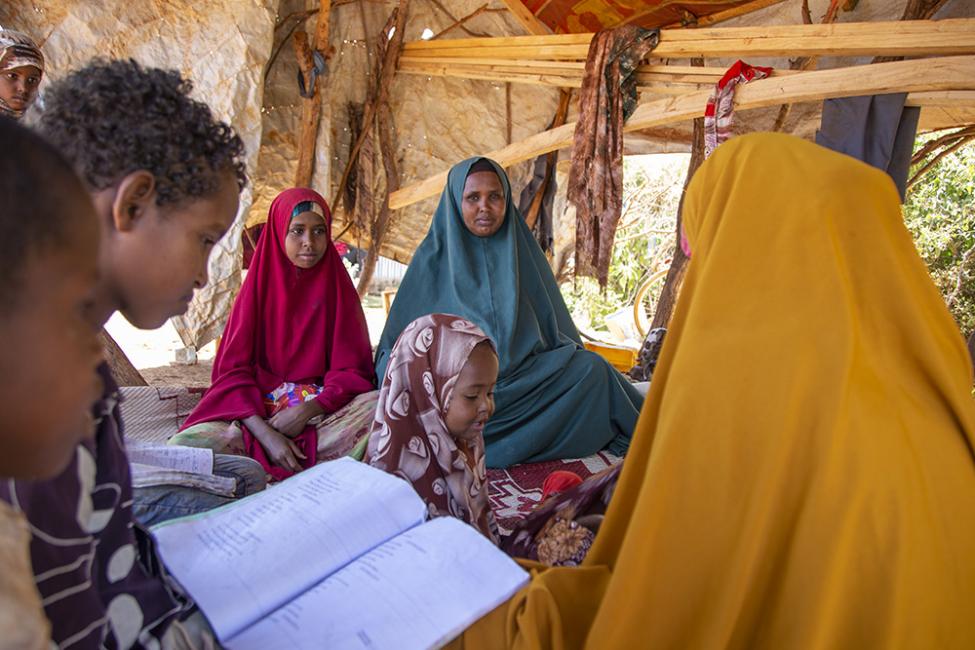 Habiba Mohammed, a 39 year-old mother of seven children and her husband were one of the families relocated to Barwaaqo in 2019. “We are tremendously lucky to now have a place we can call home and where I can comfortably raise my children,” she said to IOM one year and a half after arriving to the new site. December 2020. Photo: IOM Somalia/Foresight

Baidoa – Nearly 7,000 internally displaced persons (IDPs) who were facing eviction from their homes in Somalia were relocated on Sunday by the International Organization for Migration (IOM) to Barwaaqo, a new site for IDPs, in the South West State.

The IDPs were living on private land across 17 informal settlements in Baidoa city. They will join another 6,116 individuals who moved to Barwaaqo previously in 2019, in coordination with the South West State Government.

There are currently an estimated 2.6 million IDPs across Somalia. Nearly 360,000 displaced people live in 500 locations in Baidoa, most of them on private land. Tenants have no rights over the land or security to stay there. Even though they have built homes and lived there for years, they are at constant risk of eviction.

Habiba Mohamed, a 39-year-old mother of seven, knows all too well what it is like to be evicted. Since fleeing her native village, she had twice been evicted from spots where she hoped to offer her family safety and stability. She just arrived at the new location this week and is convinced it will finally bring stability to her life.

“I would like to stay here (in Baidoa) because we have access to land, education and better services for all of us including my children,” Habiba said.

“I remember one day we built a concrete toilet in the camp we were living in. That same afternoon the landowner told us to vacate the place the next morning”, explained another IDP, Halima Ibrahima.

Her new home, Barwaaqo, means “prosperity’’ in Somali. The new residents are among the 13,000 people benefiting from the project launched by IOM with local partners.

The site lies just outside Baidoa, on land donated by the local government to provide displaced communities with long-term accommodation security. The alternative—occupying a spot wherever it can be found—means running the risk of being accused of squatting on private land and facing renewed displacement.

Relocated families receive cash assistance and a plot of land on which to build new shelters. Each has access to a garden plot to plant and harvest food. Residents will receive title deeds two years after resettlement, which reduces the threat of relocated families moving again and risking further evictions.

“The problems that forced them to flee their places of origin are still there, and the majority of the IDPs don’t have any plans to return,” explained Mohamed Abdelazim, IOM Somalia's Head of Operations and Emergencies. “Persistent drought, flooding and conflict continue to drive displacement within Somalia and many people crowd into cities and towns in search of basic services.”

The Barwaaqo relocation is part of a wider effort from IOM and the government to provide long-term solutions to displaced populations in the country. It also sets an example of how to successfully implement the Humanitarian-Peace-Development-Nexus (HPDN), which IOM intends to replicate elsewhere, both in Somalia and globally.

The second phase of the Baidoa relocation project was funded by The Foreign, Commonwealth & Development Office (FCDO) and the European Civil Protection and Humanitarian Aid Operations (ECHO). Other donors that have contributed to the project are USAID and the Government of Japan.