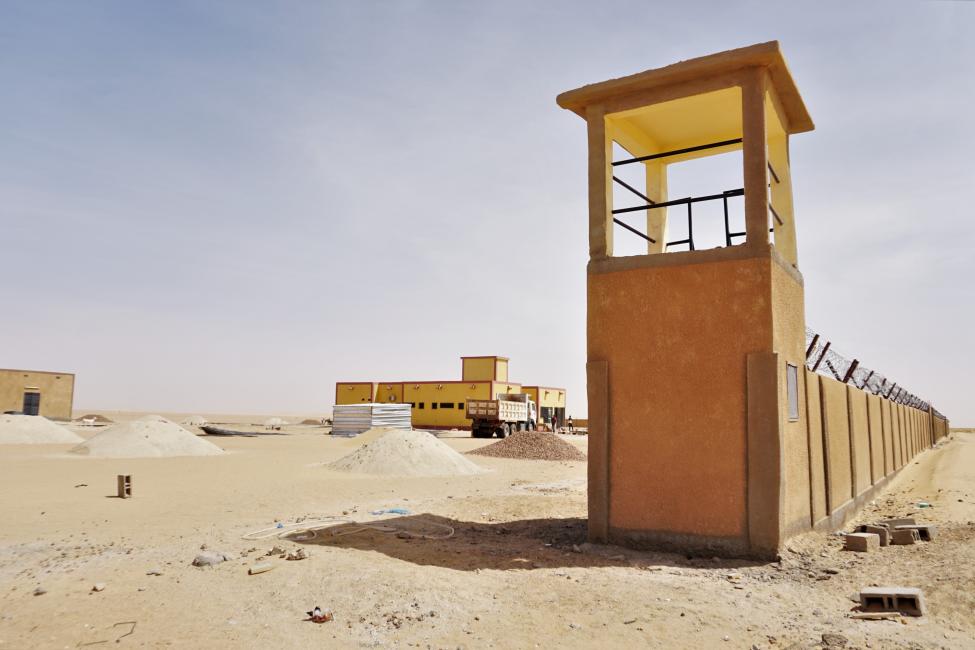 Niamey – Situated in the heart of the Sahara at only 15 km from Niger’s border with Algeria, the town of Assamaka is a major migratory hub, as the main point of entry for migrants returning from Algeria, and the last place of transit for migrants coming from Niger on their way to Algeria.

Since late 2017, over 30,000 migrants have arrived in Assamaka from Algeria, mostly from West African countries of origins.

On Wednesday (14/10), the Government of Niger and the International Organization for Migration (IOM) inaugurated the first fixed border police post in Assamaka, built and equipped with funding from the Italian Ministry of Foreign Affairs and International Cooperation.

This extensive, impoverished and sparsely populated area has long been exploited by criminal and smuggling networks. Nowadays, these ancestral trade and migration routes between Niger and Algeria are often used for smuggling illicit goods and migrants.

In recent years, border management and border security have become top priorities for the Sahel and for Niger in particular. The Government of Niger strives to reduce illicit cross-border activities, including human smuggling and trafficking, and to prevent the entry of members of violent extremism organizations through the country’s borders.

In addition to a sharp rise in crime in the border town, Assamaka also faces increasingly high migration flows, due to its position on the trans-Saharan migration route. These are proving difficult to manage to the detriment of the town’s 1,000 or so permanent inhabitants.

Up to now, migrant registration had always been done manually or through IOM’s Mobile Border Post, temporarily deployed by the Government of Niger to the Agadez region. This truck-borne mobile police post was adapted specifically for meeting the challenges in remote desert locations. But it cannot replace a fixed police station.

The newly constructed border post and its facilities will allow the police to be compliant with national and international norms and fulfill the required security and safety standards.

The border post is part of a larger project whose objective is to strengthen the capacities of Niger’s immigration service – the Directorate for Territorial Surveillance (DST). The project also aims to reinforce the cooperation between Nigerien and Algerian law enforcement agencies, as well as the coordination between Nigerien security forces, local authorities and relevant technical services, such as the Regional Directorate of Public Health in the Agadez region.

Through this new border post, eight workstations are equipped with the Migration Information and Data Analysis System (MIDAS), developed by IOM. These will allow authorities to digitally register people transiting the border. The data collected can be transmitted in real time to a central server, allowing authorities to better track and manage migration flows in and out of Niger.

“We hope that this new infrastructure will alleviate some of the current challenges faced by local authorities and will improve cross-border cooperation,” said Barbara Rijks, IOM’s Chief of Mission in Niger. “Ultimately, this border post aims to contribute to the improvement of the security and stability in Assamaka and its surroundings.”