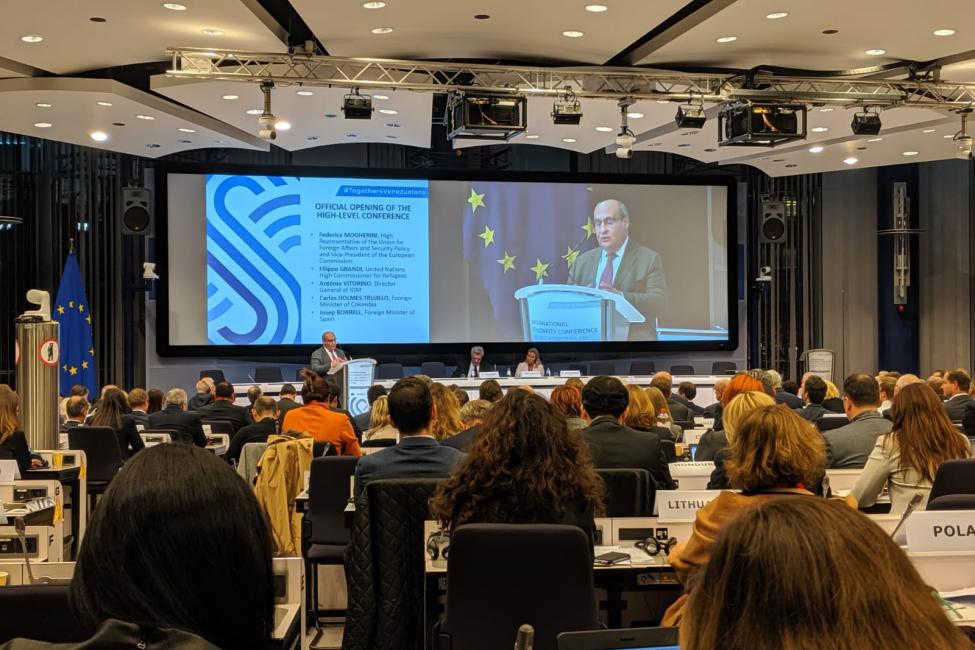 The International Solidarity Conference on the Venezuelan Refugee and Migrant Crisis held in Brussels on 28-29 October 2019 sent a strong message of support to the Venezuelan refugees and migrants as well as to their host countries and communities in Latin America and the Caribbean.

The Conference was co-chaired by Federica Mogherini, High Representative/Vice-President of the European Commission, UN High Commissioner for Refugees Filippo Grandi, and IOM Director General António Vitorino. The event aimed to raise global awareness about the Venezuelan refugee and migrant crisis and the efforts of hosting countries and communities. It also reviewed best practices and achievements of host countries, confirmed international support for a regional and coordinated response, and called for a global and inclusive partnership, where solidarity and responsibility are shouldered by the entire international community but also shared between public and private sectors.

The Conference acknowledged that the serious and deteriorating political, human rights and socio-economic crisis in Venezuela has produced one of the most severe displacement situations in the world., The outflow continues unabated, while resources and financing fall considerably short of the needs. According to official figures, some 4.5 million Venezuelans have left their country and most of them are in Latin American or Caribbean countries. This figure could reach 6.5 million people by end of 2020 worldwide.

The Conference commended the remarkable solidarity of countries in the region and acknowledged the substantial challenges they face. Participants reaffirmed their strong commitment to continue protecting and assisting Venezuelan refugees and migrants and to support the efforts of the governments of the receiving countries, notably in ensuring a sustainable integration in host communities.

The Conference also expressed appreciation for the coordinated response of countries in Latin America and the Caribbean. The Quito Process constitutes a significant step forward in harmonizing policies and practices, thereby scaling up the humanitarian response and integrating refugees and migrants across the region.

While recognizing the sovereign right of States to manage their borders, the co-chairs stressed the importance of preserving access to asylum, strengthening the mechanisms that allow the identification of people in need of international protection, maintaining flexible entry policies, continuing regularizing and providing documents to Venezuelan refugees and migrants, as well as facilitating family reunification. Any acts of hatred, intolerance and xenophobia – even if isolated and unrepresentative – need to be forcefully rejected.

The Conference confirmed the need for increased financial and technical support for host countries through stronger engagement from donors, international financial institutions, development actors, and the private sector to support national authorities in the provision of services and to promote economic opportunities for refugees, migrants and host communities. International financial institutions can play a key role by providing concessional funding and grants as well as technical assistance. Early intervention of development actors will be needed to strengthen the humanitarian-development nexus, reinforce social protection schemes, build capacity and facilitate the inclusion of refugees and migrants into the labour market.

Participants underlined the need for a cooperation mechanism involving donor states, international financial institutions and other relevant actors. They reaffirmed the role of the Regional Coordination Platform led by UNHCR and IOM as the coordination mechanism to respond to the Venezuelan refugee and migrant crisis.

As next steps, the Conference expressed support for the decision to hold a first meeting of the Group of Friends of the Quito Process, chaired by the European Union, in the coming months. The co-chairs noted with appreciation the additional pledges made during the conference and highlighted the importance of a continuous process over the coming year to mobilize substantial additional funding, including through a pledging conference.