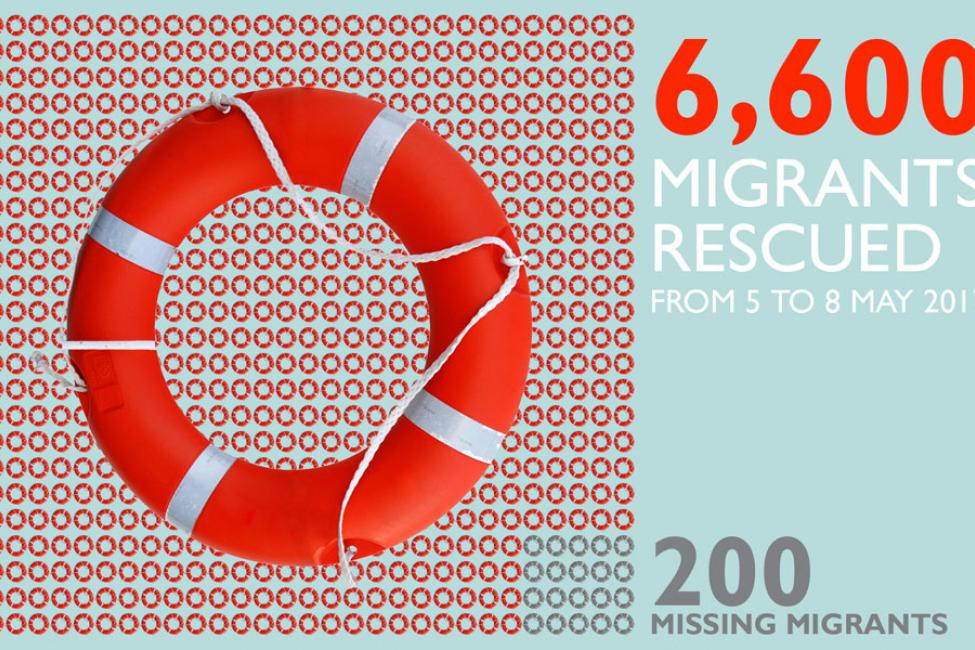 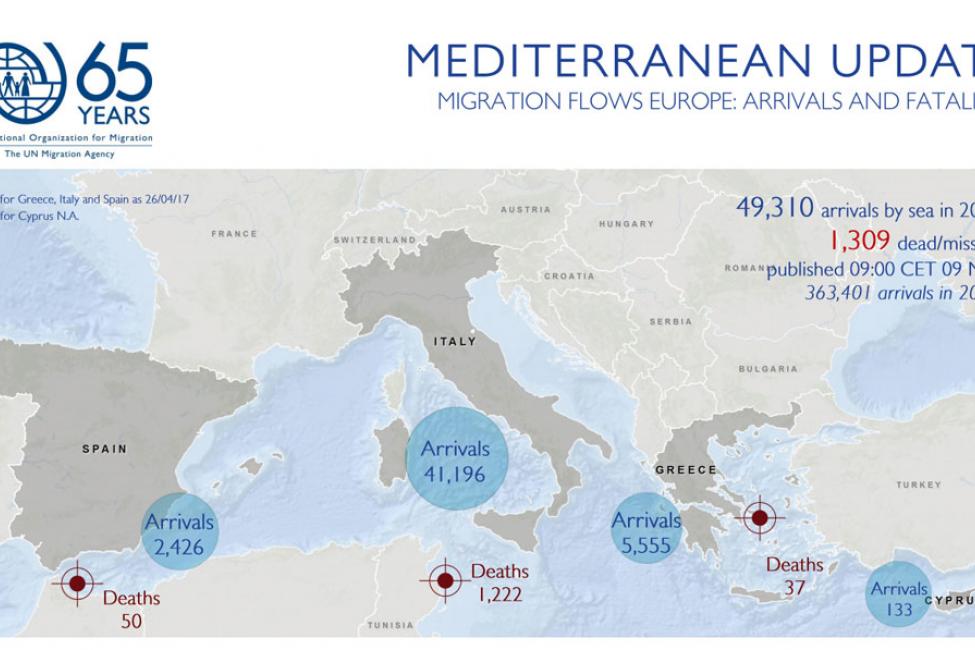 Switzerland - IOM, the UN Migration Agency reports that 49,310 migrants and refugees entered Europe by sea in 2017 through 7 May, with the vast majority arriving in Italy and the rest in Greece, Cyprus and Spain. This compares with 187,569 arrivals through 7 May 2016. IOM Rome reported over the weekend and into Monday that IOM field staffers at Italian landing points calculated a total of 6,612 rescued survivors from more than a dozen locations since last Friday.  Over 190 migrants lost their life in two shipwrecks.

Operations still underway are expected to bring all survivors to safety at the Italian harbours of Lampedusa, Reggio Calabria, Pozzallo, Augusta, Catania, Palermo and Vibo Valentia.

Rome spokesperson Flavio Di Giacomo said that, according to eye witness testimony from migrants who arrived Sunday in Pozzallo, a dinghy carrying about 130 migrants capsized during the sea crossing:  50 migrants survived while at least 80 people went missing.

“Favourable weather between Friday and Sunday brought thousands of migrants attempting a sea crossing to escape the violence and abuse in Libya,” Di Giacomo said. “Our field colleagues providing direct assistance at the harbours reported that many migrants bore signs of torture.”

IOM field staff in Libya identified another shipwreck a few miles off the Libyan coast at Az Zawiyah. As reported by one of the seven survivors rescued by the Libyan Coast Guard and local fishermen in the area, at least 113 people – including several dozen women and nine children – remain missing at sea and are feared drowned. Given the number of passengers on board, migrants were probably traveling on an unseaworthy rubber dinghy that capsized near the coast.

Nigeria, as was the case last year, represents the largest single nationality of migrants arriving in Italy, followed by Bangladesh, Guinea, Cote d’Ivoire and Gambia (see chart below). IOM Libya reported this week that since last Friday morning (5 May), 685 migrants have been rescued at sea off Libya, with more than 110 presumed missing.

On Friday, 5 May, 371 migrants were rescued off the western coastal city of Zuwarah by local fishermen. The first rescue operation was of 137 migrants, 107 men, 28 women (of which nine were pregnant) and two infants (three and eight months old), of several African nationalities.

Their migrant boat was reportedly intercepted by an armed group at sea, where the boat’s engine was taken and migrants robbed of their cellphones. Left adrift, the boat was eventually rescued by local fishermen.

A second operation saved 110 migrants: 102 Bangladeshi, six Nigerian men and two women. The last rescue operation on Friday was of 124 migrants (89 men, 31 women, four children). One of the women reportedly had an old gunshot wound in her leg. The migrants will be transferred to detention centres, including Shuhada al Nasr.

On Saturday, 6 May, 168 migrants (161 men, 5 women and 2 children) of African nationalities were rescued off the capital Tripoli by the Libyan Coast Guard. Once received at the disembarkation point at the main port, IOM staff and implementing partner, STACO doctors assisted the migrants in need of health support. The migrants were transferred to Abu Salim detention centre where they received winter blankets and hygiene kits from IOM in the afternoon.

On Sunday, two rescue missions by local fishermen occurred off Zuwara, one of 126 migrants (125 men and 1 woman) and one of 13 migrants.

Also on Sunday, another rescue mission off Az Zawiyah by the Libyan Coast Guard and local fishermen ended more tragically as only 7 migrants (6 men and 1 woman) survived. According to the testimony from one of the survivors, the boat carried around 120 migrants (including around 30 women and 9 children), which means that at least 113 migrants are still missing. Some of the rescued migrants were reportedly in need of health assistance.

“Many migrants need support after having lost loved ones at sea,” IOM Libya Public Information Officer Christine Petré said. “Having not only risked their lives but perhaps spent all their money and belongings on the chance of reaching a better life and then being rescued only to be transferred to a detention centre must be a horrible and emotionally challenging experience.”

On Monday, 8 May, IOM also received information regarding 11 bodies retrieved west of Az Zawiyah, 10 African women and one baby girl. The bodies could belong to those 110 believed to be missing from the boat off Az Zawiyah on 7 May.