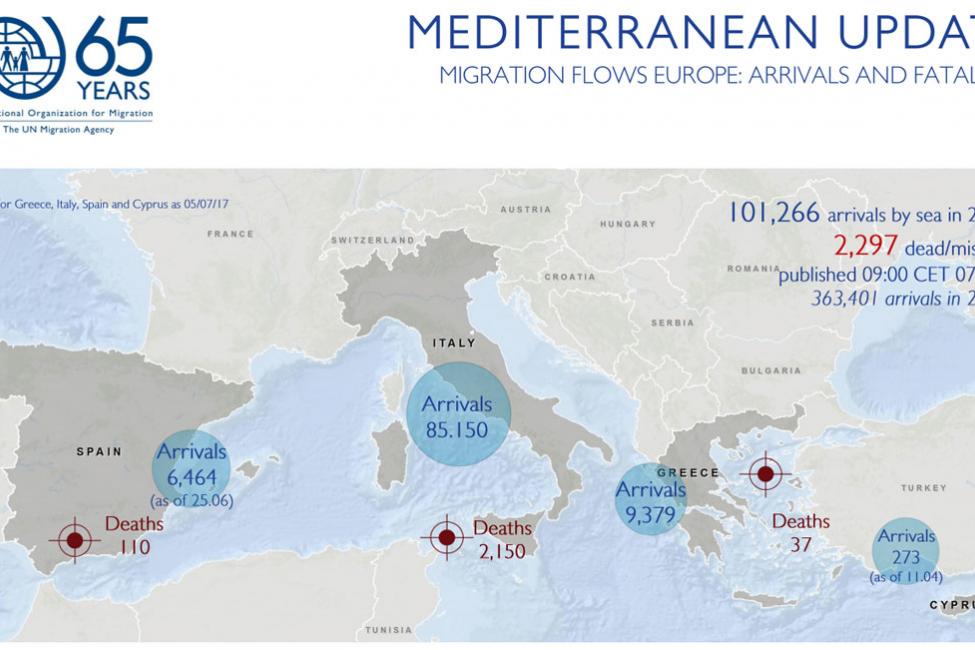 Switzerland - The UN Migration Agency (IOM) reports that 101,266 migrants and refugees entered Europe by sea in 2017 through 5 July, with almost 85 per cent arriving in Italy and the remainder divided between Greece, Cyprus and Spain. This compares with 234,646 arrivals across the region through 3 July 2016.

IOM Rome spokesperson Flavio Di Giacomo reported that just 1,129 migrants or refugees landed in Italy during the first five days of July, with no new rescues reported in Italian waters since last weekend. Arrivals to Greece through 5 July totalled 9,379, including 329 arrivals by sea, so far in July.

With the year half over, it is likely that arrivals to Greece this year will be the lowest in four years – well under the 34,442 IOM recorded in 2014, the 853,650 arrivals in 2015 and 173,561 last year (see chart below). The IOM Missing Migrants Project also notes that the Eastern Mediterranean route has been fatality-free since 24 April, when 23 drowned (16 dead, seven missing) while two were rescued off the coast of Molyvos, Lesbos. Deaths on this route at this time last year totalled 376 and 37 in 2015.

IOM Spain reported 6,464 migrant arrivals through 25 June along the Western Mediterranean route linking North Africa to Spain. That figure does not include the following rescues: on 5 July, 31 people were discovered at sea near Alboran island and taken to shore at Motril. A second boat, also near Alboran, brought in 32 survivors and taken to Motril, while a third boat brought in 33 survivors (also near Alboran, also taken to Motril). Two more boats brought 42 from Cabo de Trafalgar (survivors were taken to Tarifa); 40 more survivors were taken to Barbate. These data came from Salvamento Maritime, a Spanish rescue agency.

On 6 July, IOM Spain reported 26 men, women and children were rescued near Cabo de Trafalgar. IOM Spain said those survivors included 12 men, seven children and seven adult women, three of them pregnant. All survivors are believed to be from sub-Saharan Africa.

IOM also is following reports of 49 missing after a boat capsized 28 miles southwest of Alboran Island, Spain. The three survivors said 52 people left Morocco last weekend. Remains of the missing individuals have not yet been recovered.

Worldwide, the IOM Missing Migrants Project (MMP) reports that there have been 3,125 fatalities through 5 July this year (see chart below) with the Mediterranean region accounting for the largest proportion of deaths – almost three quarters of the global total.

In the past three days, MMP researchers have added 75 new fatalities to the regional totals: 49 missing after a boat capsized 28 miles southwest of Alboran Island, Spain; 22 cases along the US/Mexico border (18 in Pima County, Arizona, and four in Brooks County, Texas); one death in a vehicle accident in Oaxaca, Mexico, and two other vehicle fatalities in the nearby state of Veracruz. MMP also added one migrant casualty in Higüey, Dominican Republic, believed to be a drowning during a failed attempt by migrants to reach Puerto Rico.