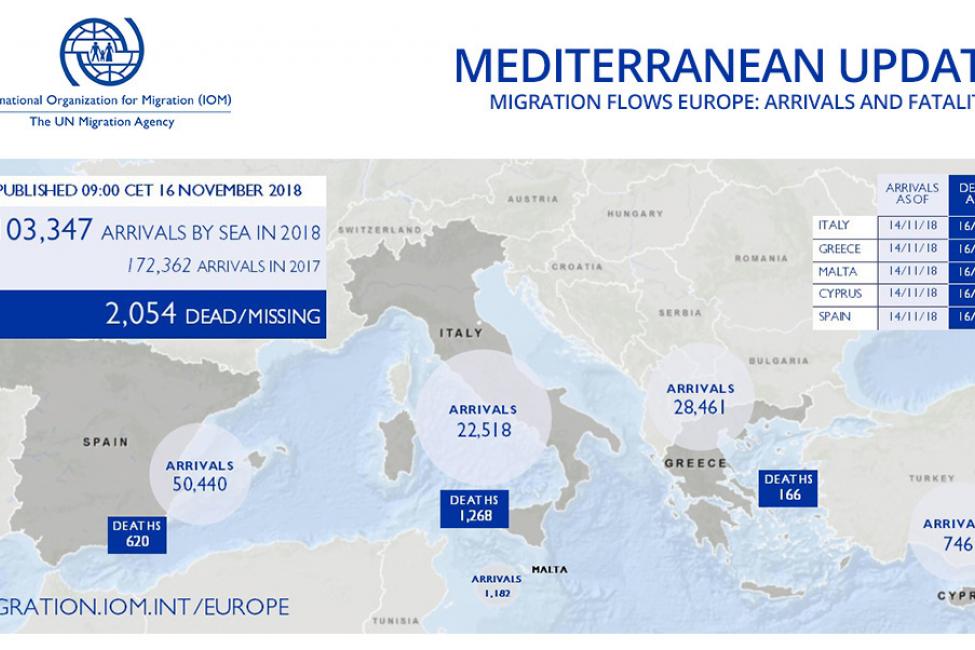 Geneva – IOM, the UN Migration Agency, reports that 103,347 migrants and refugees entered Europe by sea in 2018 through 14 November. Spain topped 50,440 – more irregular arrivals to Spain through 45 weeks of 2018 than all arrivals during the past three years combined (see chart below).

For these first two weeks of November irregular sea arrivals to Spain (2,039) continue to at least double the pace of those to Greece (958) and Italy (487). While flows from Africa to Italy remain low by recent standards, irregular sea migration between Turkey and Greece has been getting busier.

IOM Greece’s Christine Nikolaidou reported Thursday (15 November) that since Tuesday the Hellenic Coast Guard (HCG) reported there was at least one incident requiring search and rescue operations off island of Lesvos. The HCG rescued a total of 15 migrants and transferred them to that island.

Another 64 arrivals Monday, Tuesday and Wednesday to Lesvos as well as Kos and other islands brings to 28,461 the total number of sea arrivals to Greece this year through 14 November. That is just short of the total (29,595) arriving through all last year, a total that appears will be surpassed in 2018 (see chart below). As IOM has reported before, a handful of Caribbean migrants again were detected on this sea route in October. According to the Hellenic Coast Guard, five migrants were detected from the Dominican Republic and one from Haiti.

The Eastern Mediterranean route has been the scene this year of 166 fatalities by drowning, compared with 60 at this point last year.  Most recently, ten people lost their lives in a shipwreck off the coast of Dikili, Turkey on 12 November. The Turkish Coast Guard has recovered the remains of six people, including three children, all of Afghan nationality, while four people (one Iranian man and three Afghans) remain missing.

A search and rescue operation was launched after two men who survived the shipwreck managed to swim to shore and alert Turkish authorities. Fortunately, three survivors (including two women) were found alive, floating in the sea.

Tracking migrants northward, IOM’s Western Balkans team reported this week that, based on available data, 28,914 irregular migrants were registered in Albania, Montenegro and Bosnia and Herzegovina between January and 12 November 2018.

Around 75 per cent of the overall migrants registered this year in the above listed countries were registered in Bosnia and Herzegovina, where since the beginning of the year, authorities reported 21,584 new irregular migrants – 19 times more than the 1,166 registered in the whole of 2017.

According to the available information on nationalities, one third of migrants registered in Bosnia are Pakistani nationals (34%), followed by those from the Islamic Republic of Iran (16%), the Syrian Arab Republic (12%), Afghanistan (12%) and Iraq. A decrease in arrivals of Iranian nationals is observed, potentially as an aftermath of the cancelation of the visa free regime between the Islamic Republic of Iran and Serbia. In the first two weeks of November, authorities in Bosnia and Herzegovina registered 72 Iranian nationals compared to 440 registered in the first two weeks of October. In contrast to that, presence of Afghan nationals is on rise since September leading to them being the second most commonly reported nationality by migrants registered in November so far.

Based on the cumulative data on nationalities of migrants who arrived in Greece, Afghanistan has replaced the Syrian Arab Republic in first place among origin countries reported by migrants arriving into the country.  Available data from IOM field colleagues indicates that there were estimated 3,286 migrants and refugees residing in different official and unofficial reception centers in the country in the first week of November, mainly in Una-Sana Canton near the border with Croatia.

The monthly data indicates that outgoing flows exceeded registered incoming flows by 30 percent for the period between March (the start of DTM monitoring in the Shkodra region) and November. During this period a total of 1,179 migrants were registered on entry and 1,547 on exit from the country: In Montenegro, 4,217 migrants were registered as of 12 November – 6 times more than the 669 registered between January and November 2017. According to available data, 148 201 migrants and asylum seekers were accommodated in official reception centers in Montenegro on 11 November.

Between January and 13 November 2018, there were 7,453 newly registered migrants in the reception centers across Serbia. This is a 31 per cent increase from the 5,676 registered in the whole of 2017. Further on, arrivals in Serbia almost doubled in October when compared to September – 1,662 vs. 920 respectively. Almost half of all registered migrants in Serbia as of 31 October declared Pakistani origin (46%), another 30 per cent were from Afghanistan followed by 14 per cent from the Islamic Republic of Iran, 5 per cent from Bangladesh, and 2 per cent from Iraq.

On 7 November, 3,307 migrants and asylum seekers were reported to reside in different accommodation centers across the country. In the former Yugoslav Republic of Macedonia authorities reported the arrival of 3,015 irregular migrants as of 13 November, six times the 547 reported in the whole of 2017.

Available information on nationalities as of end of October indicates that the Islamic Republic of Iran is the most commonly reported origin country declared by 60 per cent of the registered migrants. Iraqi nationals comprise another 18 per cent, Pakistani nationals 8 per cent and Afghanis 8 per cent. Some 51 migrants and asylum seekers were residing in official reception centers in the country on 7 November.

Based on the data on irregular entries to Croatia, an 88 per cent increase is observed between September and October (885 vs. 1,667 respectively). Since the beginning of 2018, Croatian authorities registered a total of 6,160 irregular entries, almost three times more than the 2,137 reported for the same period last year. 64 per cent of migrants registered this year were detected in counties near the border with Bosnia and Herzegovina, Slovenia and Serbia. Majority of migrants were from Afghanistan (21%), Pakistan (16%), Turkey (13%) and the Islamic Republic of Iran (12%).

IOM’s Missing Migrants Project (MMP) noted that this week marks the death, just over 30 years ago, of a Moroccan man whose body washed up on the beaches of Tarifa.  That victim today is considered to be the first person to die while trying to migrate across “El Estrecho”, from North Africa to Spain.

So far in 2018, at least 617 people have lost their lives in this same crossing. This week alone, at least 52 people died or were lost at sea in the Western Mediterranean.  In the early hours of Monday, an unidentified man's body was found on Los Caños beach in Barbate, in southern Spain.  Since then, the bodies of six more men have been recovered in the area by Spain’s Coast Guard, Salvamento Marítimo, and at least 14 remain missing.  All those on this boat are thought to be from North Africa.

Also, on Monday, another two boats of people trying to reach Spanish territory of Melilla sank off the coast. In total, 80 people (75 men and 5 women), mostly from Sub-Saharan Africa, were rescued and brought to Melilla, along with the remains of 13 of their fellow passengers.  Based on testimonies of survivors, at least 31 remain missing.

IOM Spain’s Ana Dodevska reported Thursday total arrivals at sea in 2018 have reached 50,440 men, women and children who have been rescued in Western Mediterranean waters through 14 November (see charts below).

IOM’s Missing Migrants Project noted that this week a total of 620 men, women and children have perished thus far in the Western Mediterranean in 2018, compared with 224 though all of 2017.

On 13 November, the remains of one migrant were recovered near Cape Trafalgar, in Cádiz, Spain. He is the 19th victim of the shipwreck that took place on 5 November off the coast of Barbate. Between 5-13 November, the remains of 19 people have been located at sea or have washed up on the shore of Caños de Meca. The remains of two others haven’t been recovered. All victims came from the same town in north-western Morocco, Salé, a commuter town near the capital Rabat.

In the Central Mediterranean, a boat carrying 41 people capsized in the Channel of Sicily on 10 November. The migrants were rescued by a fishing boat, which took them to the island of Lampedusa. According to survivors’ testimonies, the boat left Libya on 8 November and went adrift two days later, when its engine stopped working. The passengers managed to attract the attention of an Italian fishing boat, and many people on board jumped into the water, trying to reach the boat’s fishing nets. Tragically, one man drowned before he could be rescued.

IOM’s Missing Migrants Project has recorded 3,204 people who have died or gone missing on migratory routes across the globe in 2018 (see chart below).

Beyond the Mediterranean’s sea routes, MMP this week recorded these fatalities: In northern Greece, a woman was killed, and nine others were injured in a car crash east of Thessaloniki, Greece on 12 November. This accident took place just days after a 4-year-old Iraqi boy was killed in another vehicle accident in the same area. Since the beginning of the year, at least 26 people have died in vehicle accidents in Greece.

In Iran, two men who had left their homes in Pakistan to migrate west lost their lives while crossing the Iran-Pakistan border on 12 November. They were killed in Iran’s south-eastern province of Sistan and Baluchistan, as they tried to cross the border in a van with five others from Panjgur district, Pakistan. One of the young men came from Pakistan’s north-western province of Khyber Pakhtunkhwa, while the other was from Kech, in Pakistan’s Baluchistan province.