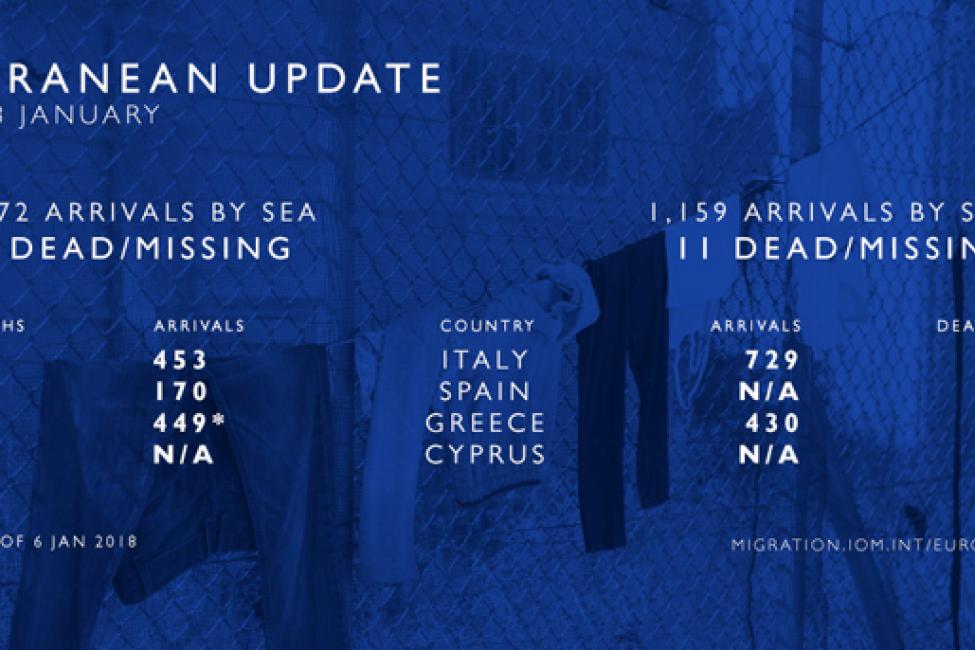 Geneva – IOM, the UN Migration Agency, reports that 1,072 migrants and refugees entered Europe by sea during the first week of 2018, with around 450 each landing in Italy and Greece and the remainder in Spain. This compares with almost an identical number – 1,159 – coming ashore during a similar period in 2017. Data on deaths at sea, however, are much grimmer.  Through the first eight days of the new year, a total of 81 Mediterranean Sea deaths of irregular migrants or refugees were recorded. Five of those deaths were in Western Mediterranean waters off Spain and Morocco.

The rest – 76 with a possibility of many more – were recorded in the waters between Italy and Libya. IOM recorded just 26 migrant deaths on Mediterranean Sea lanes during the month of December.

IOM Rome’s Flavio Di Giacomo reported Monday (8 January) that IOM staff gathering testimony of survivors of a shipwreck that occurred Saturday morning determined that 64 people lost their lives after leaving Libya on a rubber dinghy reportedly carrying 150 men, women and children. The Italian Coast Guard Ship ‘Diciotti’ rescued 86 migrants who survived to the incident, while recovering the remains of eight others, with the balance – believed to be 64 people – now lost at sea.

Survivors arriving in the port of Catania, Siciliy, on Monday morning provided the following details of the incident: the migrants left from Garabuli (Libya) after midnight between Friday and Saturday morning. After some eight to nine hours at sea, their over-crowded craft began to take on water. Many panicked and fell into the water.

A Coast Guard ship arrived almost immediately and managed to rescue 86 people while recovering the remains of six women and two men.  The migrants on board came mainly from Sierra Leone, Mali, Ivory Coast, Cameroon and Nigeria.

According to testimony gathered by IOM in Catania, at least five of the missing are children between the ages of two and six. Among the survivors are four 4 children – aged two, three, nine and 10. The three-year-old child, a girl, is said to have lost her mother in the tragedy.

A second incident off the Libyan coast this weekend reportedly claimed the lives of 12 more migrants. IOM Libya’s Christine Petré reported Monday that there was one rescue at sea operation over the weekend in Libyan territory.

She explained: “On Sunday (7 January), 270 migrants (159 men, 53 women, 46 boys and 12 girls) received humanitarian emergency assistance after spending two days at sea off the Libyan coast as they attempted to reach Italy by boat. The surviving migrants received food and water; health and vulnerability needs were attended to at the disembarkation point in Tripoli. The remains of two female bodies were found as well, with the cause of death unknown. According to witnesses, 10 migrants lost their lives at sea prior to the rescue operation.”

IOM Spain’s Ana Dodevska, also on Monday, reported 379 migrants entered Spain irregularly during the first week of 2018, 170 by sea and 209 by land at Melilla, all if the latter on a single day, Saturday 6 January.
(see charts below) IOM’s Missing Migrants Project (MMP) in Berlin reported Sseveral new deaths also were reported on the Western Mediterranean route. The body of one migrant was retrieved off the coast of Sanlúcar de Barrameda, near Cádiz, Spain, on 4 January. The following day, the Moroccan Navy rescued four people and recovered four bodies from a sinking boat near the Tanger-Med cargo port east of Tangiers, Morocco.

IOM Athens’ Kelly Namia reported Monday that at least four incidents occurred off the island of Lesvos, Samos and Chios that required search and rescue operations. The Hellenic Coast Guard rescued 143 migrants, transferring them to those respective islands.

Almost 200 migrants came ashore at Lesvos, Samos and Chios islands on New Year’s Day, and another 250 over the following five days.

Worldwide, IOM’s Missing Migrant Project (MMP) has recorded the deaths of 82 people during migration in the first week of 2018. Deaths recorded in the Mediterranean so far in 2018 total 81 – compared with 11 through the first seven days of 2017.

The Missing Migrants Project recorded 5,382 migrant deaths and disappearances worldwide during 2017. However, several data sources have yet to report numbers of migrant fatalities in certain areas for 2017, meaning that the number of recorded deaths last year is not yet final. (see chart below)

Missing Migrants Project (MMP) data are compiled by IOM staff but come from a variety of sources, some of which are unofficial. To learn more about how data on missing migrants are collected, click here.