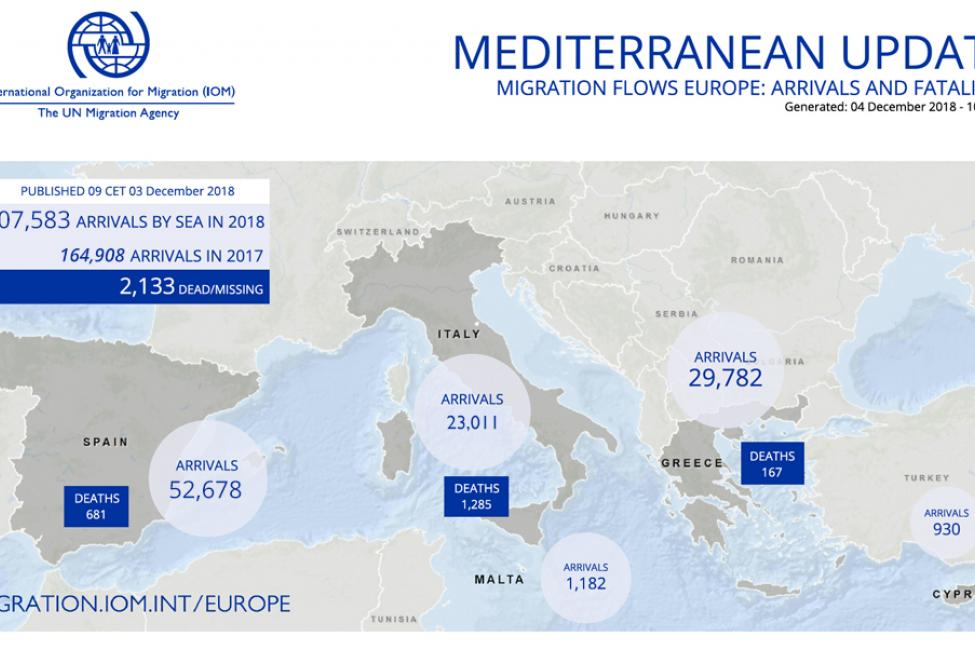 IOM Rome’s Flavio Di Giacomo on Monday noted that all seaborne irregular arrivals in the Mediterranean region remain lower – by almost 10,000 people – than arrivals last year at this time only to Italy, which recorded 117,042 through this date (see chart below). Di Giacomo noted that official Ministry of Interior (Italy) figures indicate the 23,011 migrants and refugees arriving by sea to Italy this year represent a decline of 80.35 per cent from last year’s total in the same period.

IOM’s Missing Migrants Project (MMP) has recorded 2,133 people who have drowned or gone missing on migratory routes across Mediterranean in 2018.

The Mediterranean continues to account for almost two thirds of 3,341 deaths recorded globally (see chart below), recorded in 2018. However, the MMP team notes it is crucial to bear in mind that any comparison between regions is hindered by variations in data quality, which mean that data for some regions may be highly incomplete.

At least 114 people lost their lives in the Western Mediterranean during the month of November, making November the year’s deadliest month on this route. Four large shipwrecks were documented by the team. On 5 November, there were two shipwrecks in which 54 people lost their lives: 31 people drowned in waters near the Spanish enclave of Melilla, while 23 others died in a shipwreck off the coast of Cádiz.

On 22 November, 13 people went missing and the remains of a woman, who was pregnant when she died, were recovered from a sinking boat off the coast of Almería. A few days later, 29 people drowned off the coast of Nador, Morocco. Besides these four large incidents, the bodies of 17 people were recovered from different locations throughout the month.

Most recently, three people drowned in the Western Mediterranean. Spanish rescue services recovered the body of a woman and rescued 56 others from a boat in the Albor­an Sea on 29 November. The remains of the woman were brought with the survivors to the Port of Málaga. Unfortunately, no further details on her age, nationality or identity have been made available.

Across the Mediterranean, on Algeria’s coastline, the bodies of two young men, both Algerian nationals, were retrieved by Algerian civil protection authorities at Arzew, near Oran, on 2 December. The pair had been trying to reach southern Spain with 32 others, who survived. The Missing Migrants Project team also received information about a shipwreck which occurred off the eastern coast of Algeria, where boats depart from Annaba with the aim of covering the 350km stretch of sea to the Italian island of Sardinia. On 22 November, 19 Algerian young men, between 18 and 35 years old, boarded a boat with the aim of finding a better life in Italy. However, the boat capsized amid severe weather conditions, and only 11 men managed to swim back to the shore near Oued El Agueb.

The Algerian Navy and Civil Protection authorities launched a search and rescue operation. However, to date only one body has been recovered and six people remain missing.

The parents of 27-year-old “L.S.”, whose remains were recovered on 30 November, were able to identify their son at the Ibn Rochd hospital in Annaba. During the search and rescue operation, the highly decomposed body of another man was recovered. He is believed to have drowned in a shipwreck which took place over two months ago.

IOM Spain’s Ana Dodevska reported that through Sunday (2 December) 53,512 men, women and children have arrived as irregular migrants this year. For the month of November Dodevska reported 4,912 arrivals or about 163 men, women and children per day, more than arrived in Spanish waters in April and May, but considerably fewer than the rate of arrival during the busy June-October period, when over 40,000 migrants arrived, a rate of just over 263 per day.

IOM Greece’s Christine Nikolaidou reported on Monday that from Friday (30 November) up to date, the Hellenic Coast Guard (HCG) reported five incidents requiring search and rescue operations off the islands of Samos, Chios, Farmakonisi and Symi. The HCG rescued a total of 160 migrants and transferred them to those respective islands.

Those 160 – plus 205 more arriving in Kos, Rhodes, Lesvos and elsewhere – bring to 29,782 the total number of sea arrivals to Greece this year through 2 December. That surpasses the total (29,595) arriving by sea through all last year (see chart below). Additionally, over 15,000 irregular migrants have arrived this year in Greece by land.

IOM’s Missing Migrants Project (MMP) has recorded 3,341 people who have died or gone missing on migratory routes across the globe in 2018.  Beyond the Mediterranean, the MMP team recorded in the Americas since its last report (29 November) six people who had left their homes to migrate north lost their lives.

On 29 November, remains of a 30-year-old Mexican national were found on the banks of Río Bravo in Nuevo Laredo, Tamaulipas. His parents identified him at the local morgue, saying he had attempted to cross the border into the United States in search of a better life. On the same day, 29 November, US Border Patrol agents retrieved the remains of a migrant from a ranch near Freer, Texas. The remains were transferred to the Webb County Office of the Medical Examiner to start the identification process.

Almost 2,000 miles away, in San Diego County (California), MMP researches reported three people died and another eight were injured after a high-speed chase ended in a car crash on Interstate 8, less than 10 miles from the border with Mexico. No further details regarding the country of origin, sex or age of the deceased were available. Also, near the Mexico-California border, on 30 November, a 45-year-old man from El Salvador – believed to be part of the caravan of migrants who arrived in Tijuana earlier this month – was hit by a vehicle near the temporary migrant shelter known as El Barretal.

Witnesses say he was walking with his partner, who also was injured in the accident.

In Eastern Europe, the MMP team recorded the death of a man in the Dobra river, Croatia on 30 November. The day before, three migrants who were apprehended by local police in Karlovac county had reported that another migrant had fallen and gone missing when crossing the river between the towns of Lipa and Protulipa, near the border with Slovenia.