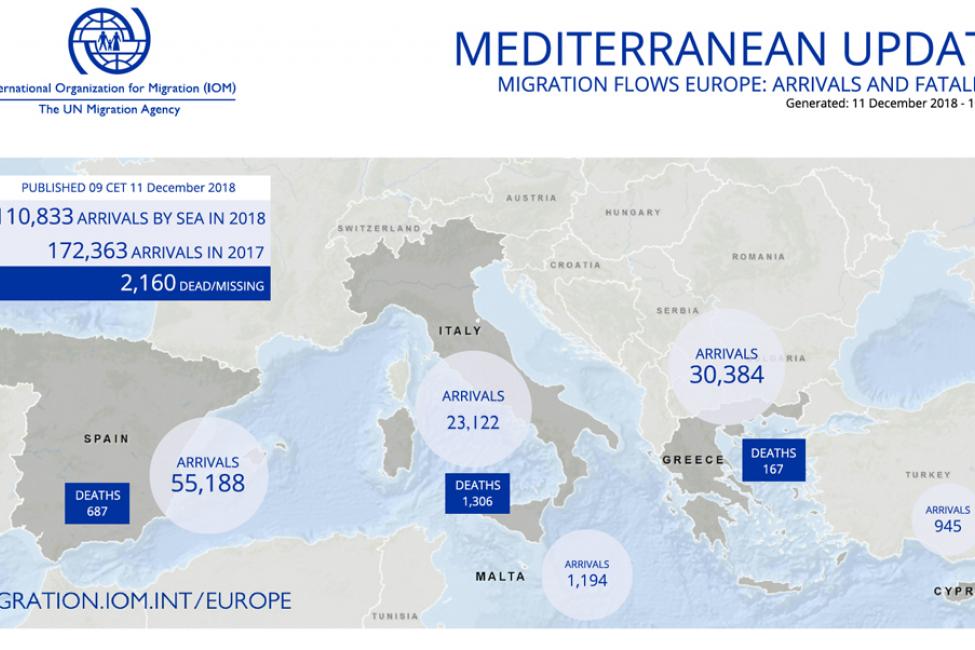 IOM Rome’s Flavio Di Giacomo on Monday noted that all seaborne irregular arrivals in the Mediterranean region remain lower – by almost 10,000 people – than arrivals last year at this time to Italy alone. In 2017 through this date, Italy recorded 117,394 irregular arrivals of sea-borne migrants and refugees (see chart below).

Di Giacomo noted that official Ministry of Interior (Italy) figures indicate the 23,122 migrants and refugees arriving by sea to Italy this year represent a decline of 80.30 per cent from last year’s total in the same period. (Table 1)

IOM Rome also provided details this week of the top nationalities of migrants and refugees arriving by sea from North Africa through the end of November. Tunisians represent this year’s largest single arrival group, however at a volume significantly below 2017‘s total. Arrival numbers also are down for all the other large arrival groups, particularly those from West African countries.  One country, Nigeria, accounted for almost 80,000 irregular migrants traveling from Libya to Italy between the years of 2015 and 2017, an average of 26,000 per year. Nigerian arrivals this year to Italy on this route total just 1,250 through the end of November (See Table 4). IOM’s Missing Migrants Project (MMP) reported Monday the Mediterranean region continues to account for most of deaths recorded globally, with 2,160 migrant deaths and disappearances recorded in 2018.

However, MMP researchers insist any comparison between regions must take note of variations in data quality, and the caveat that data for some regions are highly incomplete.

Most recently, MMP reported six people drowned in the Western Mediterranean off Algeria’s coastline. On the night of 3 December, 11 Algerian youths boarded a small boat in the village of Azzefoun, east of Tizi Ouzou, with the intent of reaching the southern coast of Spain. Tragically, the boat capsized shortly after they set out. Only five people survived. The Algerian Coast Guard recovered the remains of three young men, while another three remain missing. The families of two of the deceased have already identified their remains at the hospital of Azzefoun: Z.K., 24 years old, who was from the village of Dellys, and M.M., 29 years old, from the village of El-Kelaâ, the older of three brothers.

The Missing Migrants Project team also has learned about a shipwreck occurring in early November off the eastern coast of Algeria, where boats depart from Annaba intending to cover a 350km stretch of sea to the Italian island of Sardinia. On 8 November, four Algerian young men and one woman boarded a boat, hopeful finding a better life in Italy. Their boat capsized and disappeared without a trace. There were no survivors.

Also in the Central Mediterranean: 12 people died and three are considered missing in a shipwreck off Misrata, Libya, on 3 December. Ten rescued survivors reported being stranded at sea for more than ten days, and were suffering from trauma, severe malnutrition and fuel burns. Four survivors in need of emergency medical care were transferred to a hospital in Tripoli, while the remaining six were moved to detention centres by Libyan authorities.

No further details regarding the country of origin, sex or age of the deceased have been made available. This is the first shipwreck recorded by the Missing Migrants Project team off the coast of Libya since early September. However, with fewer dedicated search-and-rescue operations in the waters off Libya, it is very likely that many deaths have gone unrecorded, and boats carrying migrants may have gone missing without a trace.

IOM Greece’s Antigoni Avgeropoulou reported Monday that from 7/10 December to date, the  Hellenic Coast Guard (HCG) reported at least seven incidents requiring search and rescue operations off the islands of Lesvos, Symi, Samos and the port of Alexandroupolis. The HCG rescued a total of 238 migrants and transferred them to those spots.

Those 238 – plus 51 others arriving in Leros, Ikaria, and elsewhere – bring to 30,384 the total number of irregular migrant sea arrivals to Greece so far this year. That surpasses the total (29,501) arriving by sea through all last year (see chart below). Additionally, over 15,000 irregular migrants have arrived this year in Greece by land. (See Table 8.b)

IOM’s Missing Migrants Project (MMP) has recorded 3,395 people who have died or gone missing on migratory routes across the globe in 2018 (see chart below).

Beyond the Mediterranean, the MMP team also recorded the death of four people in Turkey’s north-western province of Edirne. The remains of three people, who apparently froze to death, were found separately in the villages of Serem, Akçadam and Adasarhanlı on 4 December. One day later, the remains of another man were found near Adasarhanlı.

In Southeast Asia, the deaths of two Myanmar nationals were recorded on 30 November, when the vehicle in which they were crossing into Thailand crashed near Prachuap Khiri Khan. Twelve others were injured in the accident.

In the Caribbean, the US Coast Guard rescued 21 migrants from a sinking boat off the island of Saona, Dominican Republic on 6 December. According to survivors’ testimonies, seven migrants remain missing.

Elsewhere in the Americas, several people who had left their homes to migrate north through Mexico lost their lives. On Saturday, 1 December US Border Patrol agents found the remains of a migrant on a ranch near Falfurrias, Texas. Those remains were transferred to the Webb County Office of the Medical Examiner to start an identification process.

Six people are known to have died trying to cross the Río Bravo in their efforts to reach Texas in December. On 2 December the body of a man was recovered near Brownsville. A day later (3 December), remains of two individuals were retrieved on both banks of the waterway: US Border Patrol agents recovered a body near Mission; on the Mexican side, civil protection authorities recovered the body of a young man near Reynosa, Tamaulipas.

US authorities also recovered one more body on 7 December near Laredo, while the remains of two other men were recovered by Mexican civil protection authorities on 8 December near Guerrero, Coahuila and Nuevo Laredo, Tamaulipas. On 5 December, a man drowned while crossing the All-American Canal near Calexico, California.

Additionally, a Guatemalan woman was shot by masked gunmen on 8 December, as she was travelling with a group of migrants towards the US in a truck used for transporting livestock. The shooting took place near the town of Juan Rodríguez Clara, in Mexico’s southern state of Veracruz.

Missing Migrants Project data are compiled by IOM staff based at its Global Migration Data Analysis Centre but come from a variety of sources, some of which are unofficial. To learn more about how data on migrants deaths and disappearances are collected, click here. (See Table 3)