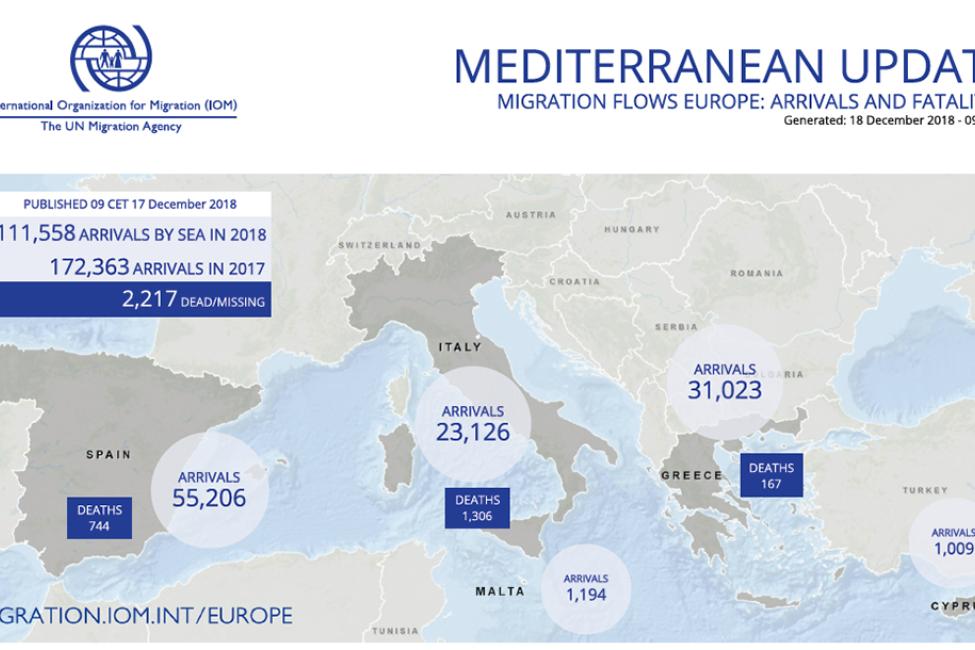 IOM’s Missing Migrants Project (MMP) has recorded 2,217 people have died this year crossing the Mediterranean on one of three major sea routes. The Mediterranean continues to account for the clear majority of deaths recorded globally. However, it is important to note that there are few reliable sources of information on deaths during migration, which means that data for some regions – including the Mediterranean – are likely incomplete.

In the Western Mediterranean, Spanish rescue services retrieved the body of a man 28 miles off the coast of Ceuta, Spain on 6 December. The Missing Migrants Project team has documented the deaths of 744 people in the waters between North Africa and Spain, compared with 224 on this route through the full year 2017. The team reports that there has been a consistent increase in the number of migrant deaths recorded in the Western Mediterranean each year since IOM began keeping track.

IOM’s Missing Migrants Project has recorded 4,476 people who have died or gone missing on migratory routes across the globe in 2018 (see Table 3).

In the Americas, two deaths have been added to the MMP data base since last week. On 8 December, a seven-year-old girl from Guatemala died shortly after crossing the border into New Mexico. She had travelled through Mexico to the US southern border with her father, with the aim of seeking asylum in the US. She died in a hospital in El Paso, Texas of dehydration and septic shock. On 12 December, the body of a man was found on the Río Bravo near Miguel Alemán, in Mexico’s state of Tamaulipas.

Missing Migrants Project data are compiled by IOM staff based at its Global Migration Data Analysis Centre but come from a variety of sources, some of which are unofficial. To learn more about how data on migrants' deaths and disappearances are collected, click here.