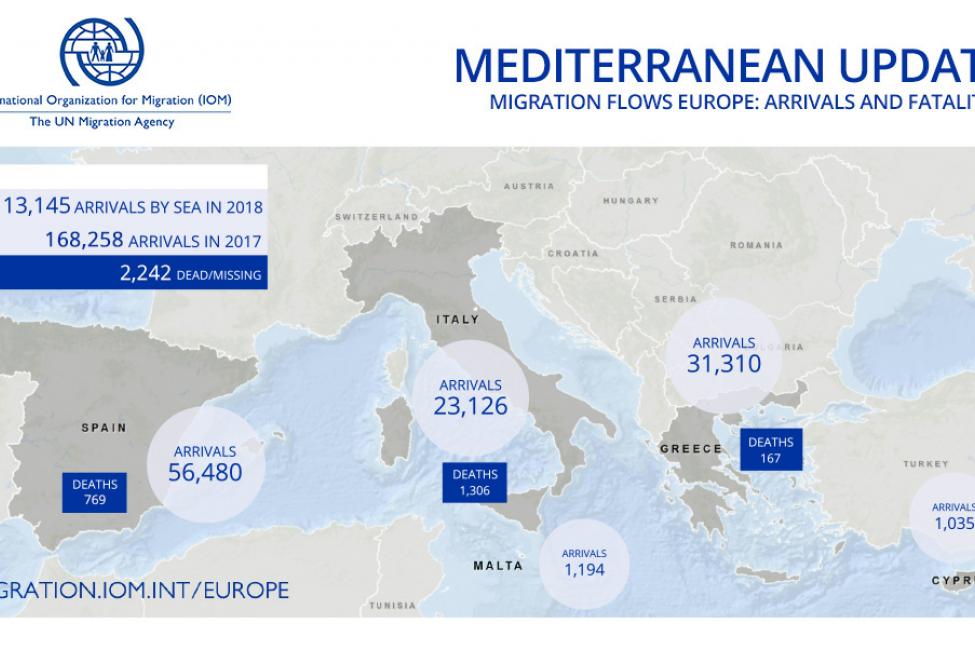 IOM Rome’s Flavio Di Giacomo on Thursday noted that all seaborne irregular arrivals to Italy through almost three weeks of December total just 115 men, women and children – indicating arrivals this month will likely be the lowest of any month since 2013. Arrivals for the entire Mediterranean region remain lower – by almost 7,000 people – than all arrivals last year to Italy alone. Through this date in 2017, Italy recorded 118,914 irregular arrivals of sea-borne migrants and refugees. Arrivals to Italy from North Africa this year are 23.126.

IOM Spain’s Ana Dodevska reported Thursday 56,480 irregular migrants have reached Spain’s Mediterranean coasts through 19 December – a rate exceeding 1,000 per week through the year. Arrivals to Spain this year through 19 December account for 49.93 per cent of all Mediterranean irregular arrivals to Spain, Italy, Greece, Cyprus and Malta. With 12 days remaining in December, and arrivals this month to Spain averaging almost 160 persons daily, Spain may well surpass 58,000 arrivals for the year and likely account for over 50 per cent of all irregular arrivals in the region in 2018.

IOM Greece reported Thursday (20/12/2018) that from Tuesday 18 December up to yesterday, the Hellenic Coast Guard (HCG) reported at least one incident requiring search and rescue operations off the islands of Samos. The HCG rescued a total of 44 migrants and transferred them to that island.

Those 44 – plus 243 arriving in Symi, Kos, Samos and Lesvos – bring to 31,310 the total number of irregular migrant sea arrivals to Greece through 19 December this year. That surpasses the total (29,501) arriving by sea through all last year (see Table 8.b). Additionally, over 16,600 irregular migrants have arrived this year in Greece by land.

IOM Cyprus’ Dimitrios Tsagalas reported the arrivals last Thursday (13 December) of four migrants, all adult males from Syria, who turned themselves in at a Nicosia police stations. This week he reported two more arrivals. On Monday (17 December) 13 people – a Somali family described as “one female and 12 children|” was reported in Larnaca. On Wednesday (19 December) IOM Cyprus reported none males – eight Syrians, one from Iran) were reported at a police station in Nicosia. These latest arrivals bring to 1035 the number of irregular migrants arriving on the island from elsewhere in the Mediterranean. This is the second consecutive year such arrivals have surpassed 1,000 individuals (See chart below). IOM’s Missing Migrants Project (MMP) reported Thursday the Mediterranean region continues to account for most deaths recorded globally, with 2,218 migrant deaths and disappearances recorded through 19 December 2018. However, MMP researchers insist any comparison between regions must take note of variations in data quality, and the caveat that data for some regions are highly incomplete.

IOM’s Missing Migrants Project (MMP) has recorded 3,456 people who have died or gone missing on migratory routes across the globe in 2018.
Missing Migrants Project data are compiled by IOM staff based at its Global Migration Data Analysis Centre but come from a variety of sources, some of which are unofficial. To learn more about how data on migrants’ deaths and disappearances are collected, click here.