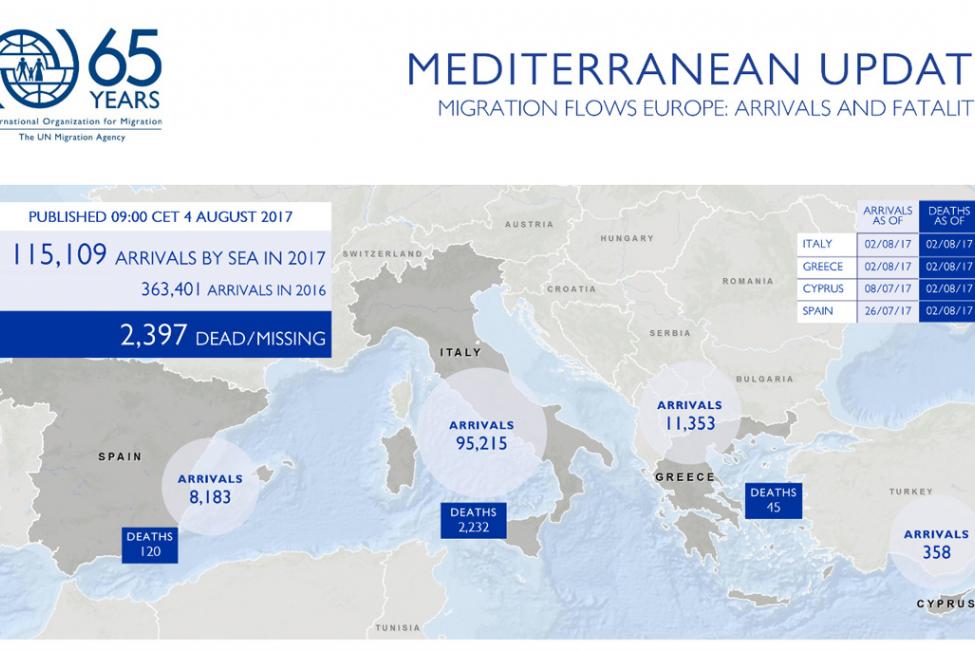 Geneva – IOM, the UN Migration Agency, reports that 115,109 migrants and refugees entered Europe by sea in 2017 through 2 August, with almost 83 per cent arriving in Italy and the remainder divided between Greece, Cyprus and Spain. This compares with 261,228 arrivals across the region through 2 August 2016.

IOM Rome reports that according to official figures of the Italian MOI, 95,215 migrants arrived in Italy by sea this year, which is slightly (2.73 per cent) fewer than last year during the same period, when 97,892 arrived, highlighting a trend that IOM has observed of slower traffic to Italy during mid-summer, and fewer deaths (approximately half of those recorded in July 2015 and 2016).

Italian authorities this week released the latest roster of top-ten nationalities to arrive as migrants traveling by sea from Africa through the end of July. (See chart below.) Nigeria continues to be the year’s top sender nation with 15,317 arrivals, followed by Bangladesh (8,687), Guinea (8,631), Cote d’Ivoire (7,905) and Mali (5,526). Bangladesh, Guinea, Cote d’Ivoire and Morocco continue to show sharp increases over levels of arrivals at this time last year. Those countries that now are sending fewer migrants include Eritrea – down more than 50 per cent from 2016 – with slighter decreases as well for Nigeria, Sudan and the Gambia. IOM’s Flavio Di Giacomo further noted total arrivals by sea to Italy during the month of July came to 11,461, a decrease of more than 50 per cent compared with the total registered in July 2016: 23,552. (See chart below.)

IOM Athens reported Thursday that 73 migrants and refugees arrived at various Greek locations (Lesvos, Rhodes, Megisti) between 31 July and 2 August. The total number of arrivals by sea to Greece as of 2 August is 11,353. This compares with 160,515 at this time last year.

The latest fatalities in the region were reported on Tuesday (1 August) when eight corpses were recovered on a dinghy off the Libyan coast – it is likely the migrants died from asphyxiation on board. They are expected to be brought to land in Italy on Friday.

Worldwide, the IOM Missing Migrants Project (MMP) reports that there have been 3,408 fatalities in 2017 through 2 August (see chart below) with the Mediterranean region accounting for the largest proportion of deaths – over two-thirds of the global total. Among the newly confirmed fatalities from MMP are: 8 deaths at the US/Mexico border (1 drowning in Rio Bravo and 7 bodies found in Pima County, Arizona), 9 deaths in the Mediterranean (8 bodies found in a dinghy off the coast of Libya and one body recovered south of Tarifa, Spain), and 6 deaths in Central America (one train accident in Oaxaca, one violent incident in Chiapas, and a shipwreck off the coast of Diriamba, Nicaragua: one body has been found and at least 3 other migrants are missing).