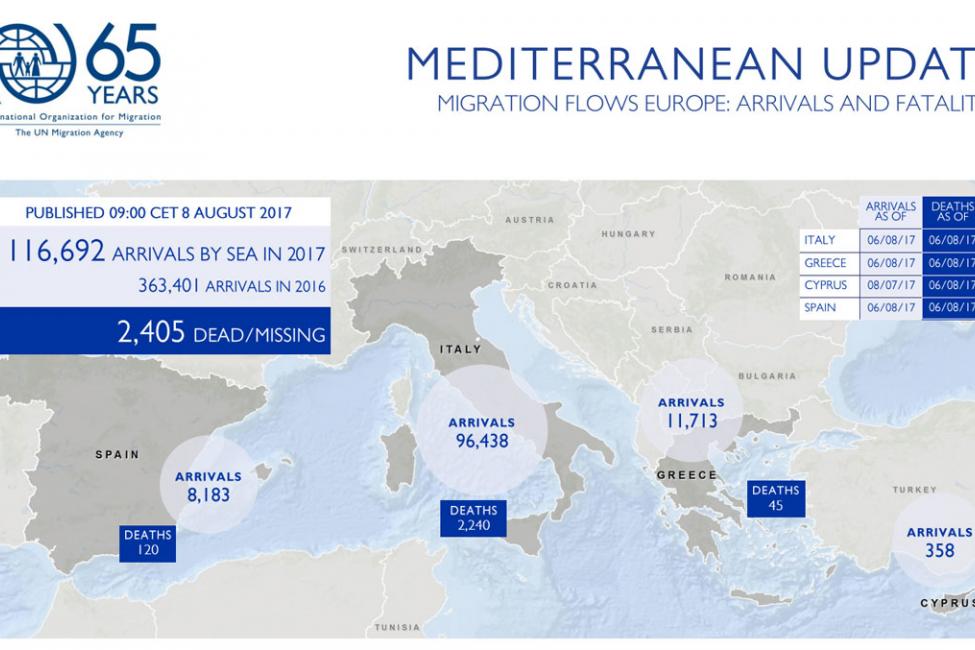 Geneva – IOM, the UN Migration Agency, reports that 116,692 migrants and refugees entered Europe by sea in 2017 through 6 August, with almost 83 per cent arriving in Italy and the remainder divided between Greece, Cyprus and Spain. This compares with 263,436 arrivals across the region through 6 August 2016.

IOM Rome reports that according to official figures of the Italian MOI, 96,438 migrants arrived in Italy by sea this year, which is slightly (3.3 per cent) fewer than last year during the same period, when 99,727 arrived, highlighting a trend that IOM has observed of slower traffic to Italy during mid-summer, and fewer deaths.

The Italian MOI also released an updated chart comparing the monthly arrivals by sea in Italy between 2017, 2016 and 2015.

According to data collected by IOM Regional Officers at the Greek islands, it is estimated that among migrants, who arrived by sea to Greece in 2016, there were approximately 42 per cent male, 21 per cent female and 37 per cent children. Their main country of departure was Turkey and their main landing points were the islands of Lesvos, Kos, Samos, Rhodes, Kalymnos, Megisti, Leros and Chios.

Worldwide, the IOM Missing Migrants Project (MMP) reports that there have been 3,420 fatalities in 2017 through 6 August (see chart below) with the Mediterranean region accounting for the largest proportion of deaths – over two-thirds of the global total.