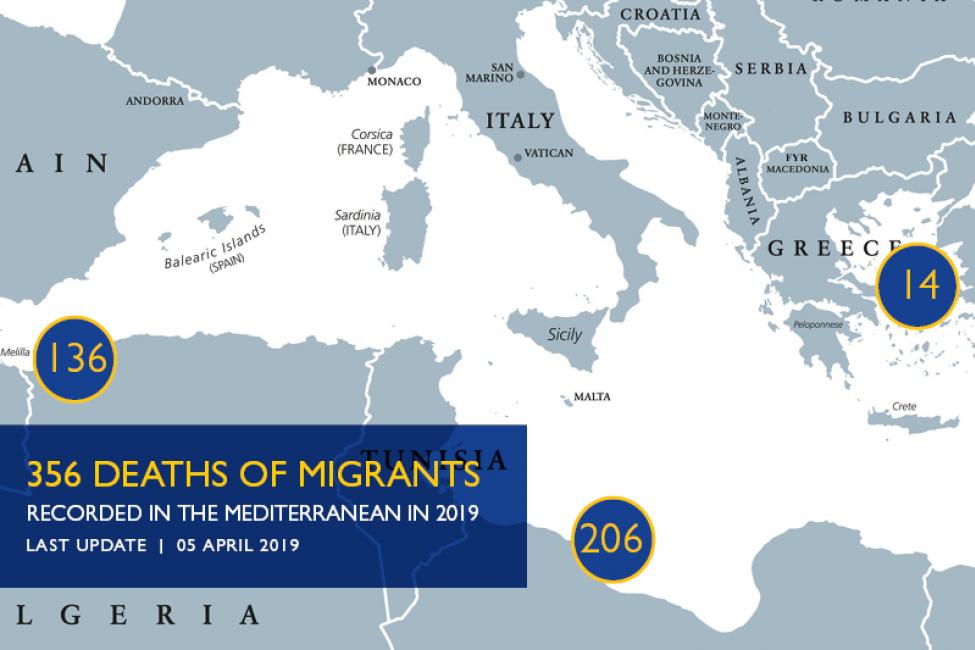 Geneva – The International Organization for Migration (IOM) reports that 12,174 migrants and refugees have entered Europe by sea through 3 April. Deaths on the three main Mediterranean Sea routes have reached 356 individuals (see table below). Yesterday (4/4) IOM Rome’s Flavio Di Giacomo reported that a total of 532 migrants have reached Italy by sea in 2019, according to the Ministry of Interior (see table below). IOM staff members are deployed at the main landing points in Sicily (including Lampedusa), Calabria and Apulia.

Since the start of the year, 1,073 migrants have been returned to Libya by the Libyan Coast Guard. (See chart) Di Giacomo reported that the NGO Sea-Eye’s ship (“Alan Kurdi”) rescued 64 migrants on Wednesday in the waters between Libya and Europe. It is still unclear where and when the boat will be allowed to land. For the moment no European State has granted authorization to dock. The rescue operation was carried out on the same day that clashes were reported south of Tripoli, Libya – a country that is not considered a safe haven for rescued migrants.

While the number of migrants returned to Libya has reached 1,073, and 776 have reached Europe (532 in Italy and 244 in Malta), the death ratio in the central Mediterranean route in 2019 is now about 10 per cent which means 1 in 10 people who attempt the crossing is reported dead or missing. This represents a notable increase compared to the death ratios of 2.6 per cent and 3.5 per cent respectively registered in 2017 and 2018.

In the last two weeks there have also been reports of two boats departing from Libyan shores, carrying 41 and 50 people on board. Neither vessel has been found by Libyan authorities or Italian, Maltese or NGO boats. There are growing concerns about the increasingly limited search and rescue capacity in the Central Mediterranean that needs to be further reinforced.

IOM Spain reported that 5,600 men, women and children have arrived irregularly in Spain by sea since the start of this year (through to 31 March).

IOM Greece reported on Thursday (3/4) that 5,621 migrants have reached Greece by sea this year. Most migrants accounted for in the data set come from Turkey. IOM staff is present in Lesvos, Samos, Chios, Leros, Kos and Crete Island.

2019 is the sixth year of IOM’s efforts to systematically record deaths on migration routes worldwide through its Missing Migrants Project (MMP). Since the beginning of 2014, the Project has recorded the deaths of 31,626 people, including 667 in 2019. Due to the challenges of collecting information about these people and the contexts of their deaths, the true number of fatalities during migration is likely much higher. Therefore, MMP records should only be viewed as indicative, rather than representative across time or geography. In the Western Mediterranean, the remains of a man washed ashore near Aguadú, Melilla on 19 March. Just a few days later, on 22 March, the body of a woman was recovered nearby, in Playa de Horcas Coloradas, Melilla. The recovery of these remains is not linked to any known shipwreck in the area, as there have been no reports of a boat capsizing near this Spanish autonomous region in Northern Africa.

On 1 April, 13 people were rescued from a sinking boat adrift in the Gibraltar Strait by Spanish rescue services. A young man showed signs of severe hypothermia. He tragically died upon disembarkation in the Port of Tarifa, Cádiz.

A day later, on 2 April, the Moroccan Association for Human Rights reported that local fishermen from Nador found the remains of a man entangled in their fishing nets off the coast of Al-Hoceima. No information on the identities, age, or country of origin of the deceased is available. At least 136 people have died or gone missing in the waters between North Africa and Spain since the beginning of the year, including five children and 13 women.

The waters between Haiti and the Turks and Caicos Islands became the site of a tragic loss of life when a ship carrying more than 30 Haitian migrants capsized off the coast of West Caicos on 31 March. The Royal Turks and Caicos Coast Guard rescued 14 survivors and recovered the remains of 17 people. It is believed two people remain missing. In early February, another shipwreck claimed the lives of 31 Haitian nationals off the coast of the Bahamas. In the first three months of 2019, the Missing Migrants Project has recorded the deaths of 50 Haitians who left their homes searching for a better future and did not survive.

On the US-Mexico border, two Ecuadorian migrants died in a car accident shortly after crossing the border into Laredo, Texas on 24 March. Twenty-three-year-old Elsa Fanny Guamán Cajilema and her brother-in-law, 17-year-old Luis Fernando Bravo, were both from Alausí, in Ecuador’s province of Chimborazo. They were hoping to join Elsa’s husband and Luis’ brother in the US. Elsa leaves behind two children, who stayed with family members in their hometown. In Mexico, a 41-year-old man from El Salvador fell out of a moving vehicle while transiting through Villa de Cos, Zacatecas on 3 April.

In Europe, two deaths were reported in late March. In the early hours of 31 March, a 27-year-old Bangladeshi man died, and 14 others were injured when the driver of the vehicle in which they were travelling forced them to jump out of the van in order to avoid a police control. The tragic incident happened along the regional road Udovo-Demir Kapija, near the Vodisirska river, in North Macedonia. Six of the 14 survivors, who originate from Pakistan and Bangladesh, suffered severe injuries and were transferred to hospitals in Gevgelija and Kavadarci.

On the same day, a man of unknown nationality was found dead inside a mountain crevice by the Croatian mountain rescue service, in a forest area north of Javornik, Croatia.